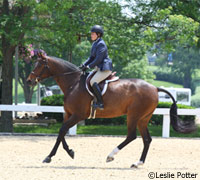 The biggest misconception about Standardbreds is that they don’t canter or gallop; in reality, only a few of them don’t. They have the same ability to perform the canter and gallop gaits as any other horse, but often from their earliest training they have been strongly discouraged from doing so. Most will canter readily after patient and consistent training and can even become fine riding horses. The majority have a tractable nature and, if already trained to the cart, have the basic skills to easily make the transition to carry a rider.

Getting your Standardbred to canter is not just a matter of whacking the horse on the butt to get him going. The breed typically has a longish back with hind legs set farther back on the body than most horses. This conformation is most efficient for fast, streamlined, horizontal forward motion rather than elevation. Since the canter requires the hind legs to reach forward and propel the body upward, Standardbreds have a genetic hurdle, as well as psychological barriers, to cross.

Off-the-track Standardbreds have many benefits that transfer from the track to the riding stable. They’ve been exposed to crowds, the sights and sounds of heavy equipment, frenetic activity, loud noise and daily handling. These racehorses are shod every six to eight weeks, accustomed to two bits in their mouths, comfortable with harness straps hanging down and jangling around whenever they move, and they respect a whip. And, because they are frequently hauled from track to track, they tend to trailer well and settle into new homes fairly quickly.

On the downside, Standardbreds have been strongly “pulled up” when breaking stride to gallop, which results in their reluctance to make this mistake again. So, they must unlearn an early memorable lesson before they can feel confident and relaxed enough to canter.

Another product of race training is the tendency for Standardbreds to speed up after making a U-turn. (Harness racehorses are exercised, or “jogged,” traveling clockwise on the racetrack, and “turned” counterclockwise to race.) Racing also encourages horses to be hyper-competitive, so sometimes this becomes an issue when riding them in groups.

Even race equipment is counterproductive to teaching the canter to Standardbreds. The overcheck rein that is attached to a bit on one end and snaps to or loops around a hook on the back harness forces the horse’s head up and his nose out, creating a hollow back. To carry a rider comfortably at canter, the horse’s nose needs to come down, and his back should berounded.

Canter Starts on the Ground

Robyn Cuffey, co-author of Retraining the Harness Racehorse and The Essential Guide to Carriage Driving, recommends you start working with your horse from the ground. If he has trouble performing a canter in a round pen or on a longeline, he’ll surely have trouble with it under saddle. Cuffey adds that it’s fairly easy to teach Standardbreds to longe if they haven’t been taught. Currently residing and training at Photo Finish Farm in Buxton, Maine, Cuffey has retrained hundreds of Standardbreds. She is past president of the Standardbred Pleasure Horse Organization (SPHO), an organization devoted to promoting second careers for harness racehorses, and founder of its Maine chapter.

Anne Chunko, administrator of the Standardbred Equine Program (SEP) for the United States Trotting Association (USTA), says that the main concept you want to teach your Standardbred for all gaits is to give to the bit and engage his haunches. “Off-the-track Standardbreds know to stop or slow when pulled up with the bit, but don’t really know anything about giving their heads to pressure. I like to start a horse on the longeline equipped with very loose side reins attached to a surcingle and move him immediately into the trot. The energy from the trot will encourage the horse to round a little when he moves into the bit, not stop or slow as he might at the walk. As he progresses over the weeks, I gradually shorten the reins.” (If you’re unfamiliar with side reins, ask an experienced trainer or friend for guidance.)

Once you think your horse is ready for his first canter on the longeline, you need to prepare yourself for what will probably happen. When you encourage him to go faster, he’ll no doubt speed up at the trot until you’re dizzy, but may eventually canter from his own momentum. If not, a flick of your longe whip may give him added incentive. If he strikes off, praise him lavishly and, after a few strides, bring him back to a trot. Carry out a few more exercises he performs well, and then call it a day.

It is normal if your horse becomes overexcited about these first few canter lessons on the ground because in his mind he’s “breaking stride” and fears correction. Additionally, canter feels more awkward to him than his usual gaits. Above all, stay calm (if you aren’t, fake it) and give a voice command for trot to slow your horse before using more overt pressure. A harsh correction will only reinforce what he fears.

You’ll have more success with these ground lessons (and, when he’s ready, lessons under saddle) if you plan ahead where to ask for canter. For instance, upon approach to an arena corner, your horse will turn his head in the direction he’s going, and his body will be in position to strike off from the outside hind leg. If you give a canter command at the stride before the corner, your horse will likely pick up the proper lead. Preparing your horse to canter on the correct lead by positioning him for success will help him feel more comfortable in upcoming turns and circles.

Regard your Standardbred as untrained for canter the same as you would a young horse learning his first lessons. Use the same methods to teach him as well. Do not canter for extended distances until your horse has built up the muscles for it. He may be trained to trot for a few miles without stopping, but cantering is more physically demanding. You will know when you’ve overdone it when your horse’s strides are really flat, he seems reluctant to pick up the gait when you ask, or just stops doing it once he’s learned how.

When your horse demonstrates solid ground skills and steadily picks up a canter on the longeline, you are ready to try it under saddle; however, don’t rush to get to this point. All the time and effort you expend on the ground gaining muscle strength, flexibility, obedience and trust will pay off under saddle.

After a horse has spent enough time on the longe to pick up a canter going both directions, Cuffey begins under saddle work with bending and stretching exercises. Standardbreds don’t curve their bodies when they race, so they need to be taught to use their bodies in a different way to strengthen their muscles. Cuffey first teaches a neck-bend by applying a direct, “wiggly” rein on one side of the horse’s neck until he stretches his nose toward the stirrup. (As with all exercises, do this on both the right and left sides.) Then, Robyn practices many other bending and stretching exercises, such as leg yields, walk and trot over ground rails, and “hopping” cavalletti to teach the horse to round his back and elevate his legs.

Your first canter attempts should be in an enclosed arena not only for safety purposes, but because you can use corners to help facilitate the strike-off to canter. If your horse picks up the canter like he was shot out of a cannon, make sure that you do not pull him up or hang on his mouth to slow him. You must stay balanced in the saddle for at least a few strides while praising him like crazy.

“When you decide your horse is ready to attempt a canter, I’ve found it’s best to try it when the horse is somewhat fresh, even ‘revved up’ a bit,” Cuffey says. “The gait requires quite an effort at first, so you need that extra energy.” If the warp speed frazzles you, someone else should be doing the initial canter training.

Cuffey says that through proper training, your horse’s canter departure and gait will improve. “What you’ll notice is that the first stride has lift, and each stride after that gets flatter and flatter,” Cuffey explains. “Practicing canter over time will improve the quality and duration of the strides, but it’s important to note your Standardbred may never have a classic canter. After all, they are bred for efficiency and the breed achieves it at the trot or pace.”

Remember, your horse’s biggest challenge is keeping his balance with your added weight. He may become pretty handy at canter on the longeline, but performing under saddle is quite another thing. At first, you might feel as though his feet are scrambling all over the place and you’re being launched with each stride, but he’ll improve over time with correct training.

How to Choose a Western Bit