Q: I always thought that foals had to have shots pretty early on, just like human babies. My friend says they don’t need vaccinations because they get antibodies from their mother when they begin nursing. Who’s right? 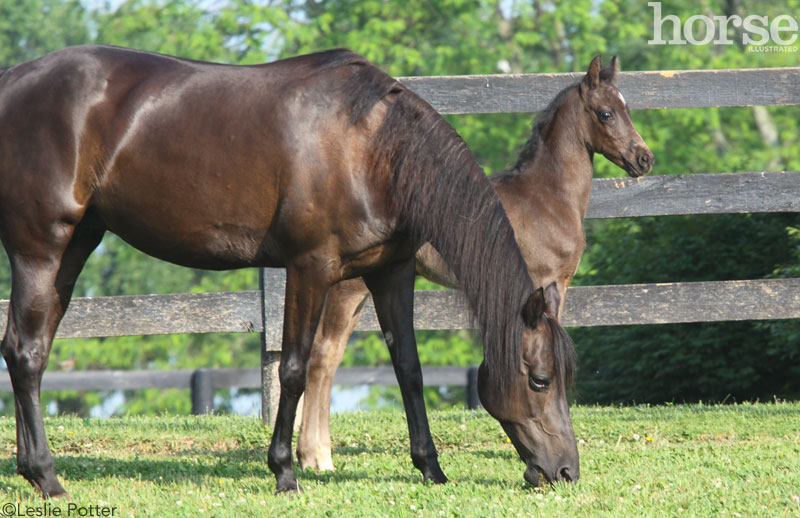 A: You both are! The normal process is: mares concentrate protective antibodies in their colostrum or “first milk,” the thick, yellow, sticky fluid that foals must nurse within their first 24 hours of life before their gut “closes.” That is, for the first day after birth, foals are able to absorb large molecules like antibodies through their digestive tract. But because harmful agents could also enter the body this way, Mother Nature closes this route of entry down fairly quickly. If the colostrum wasn’t rich with maternal antibodies to begin with or the foal didn’t stand up and nurse well right away, then passive transfer of immunity may not have occurred and the new colt or filly is not protected from infection.

To give foals the best start on life possible, owners can step in and help facilitate this process in a couple of ways. First, they can work with their veterinarian to appropriately vaccinate mares 4 – 6 weeks before foaling so that the colostrum is abundant with ready-made antibodies. Second, they can confirm that newborn foals “latched on” and drank within an hour or two of birth. And third, owners can schedule a veterinary exam that includes blood testing of the foal to ensure that an adequate level of maternal antibodies was absorbed.

But broodmare owners and new foal caregivers can’t stop here. It’s already time to start thinking about when the young colt or filly should first be immunized and against what diseases. The American Association of Equine Practitioners (AAEP) provides two vaccination schedules for foals based on whether or not the mare was immunized shortly before giving birth.

Veterinarians and owners work together to try and balance the protection against disease that maternal antibodies provide with the interference to vaccines these same antibodies cause. That is, if maternal antibodies to, say, tetanus, are circulating in the foal’s body at the same time that the tetanus vaccine is administered, then the antibodies identify the vaccine as an infectious agent, destroy it, and prevent the body from mounting the desired immune response to the vaccine. That’s why the initial vaccination series in foals is often three separate immunizations a few weeks apart.

While the goal is to try and stimulate an immune response so the foal is protected before the maternal antibodies decline to non-protective levels, the trick is to “show” the foal’s immune system a safe version of a disease (aka the vaccine) and not have it get “chewed up” by antibodies from the mare.

For foals born to mares who did not get vaccinated prior to delivery, the immunization series is begun earlier since there aren’t maternal antibodies to get in the way of a response and it’s critical to provide them with some protection to common diseases that they might not have.

This was probably more information than you and your friend were looking for, but I wanted to explain what goes on in the mare’s body and in the foal’s body so that you both fully understand why you’re both right!

What to Do When Your Horse Has an Eye Injury