In our Ask the Vet column, Dr. Lydia Gray answers your horse-health questions at HorseChannel.com/AskTheVet.


Q: I have an older horse in his 20s and he has recently started choking. He is now considered a chronic choker. I have had to get him tubed twice by the vet and now we have to soak his food in half a bucket of water. We think it is due to him just getting to excited about his food. My vet recommended soaking his food or taking him off grain (grain is the only thing he chokes on). Do you have any other ways of dealing with it? And can you explain why it is easier for a horse to choke after they have done it once already? 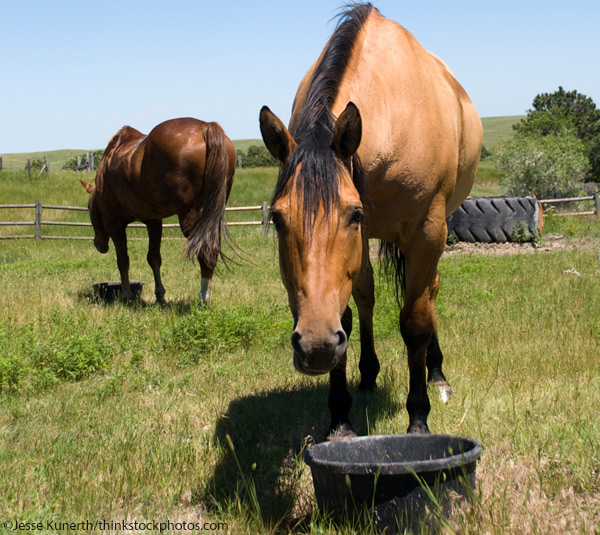 A: While choke in horses is a serious condition, an emergency even, it’s not to be confused with choking, say, in people, where something is obstructing the airway and minutes can mean the difference between life and death. Choke in horses is when something obstructs the esophagus, or the tube from the oral cavity to the stomach. Because the horse is unable to swallow food, water, or the constantly produced saliva, you were correct in contacting your veterinarian right away to have it resolved as soon as possible to prevent dehydration, disturbances in his acid-base and electrolyte status, aspiration pneumonia (lung infection due to breathing in of feedstuffs or liquid into the airway) and other complications.

You didn’t mention whether your horse was depressed during his episodes and hanging his head or excited and actively trying to resolve the situation himself with coughing or retching in an agitated manner. Either way, it sounds like your vet was able to get things moving again probably through sedation, maybe a muscle relaxant, and lavaging the lodged material with water via a stomach (nasogastric) tube.

The reasons why a horse may choke repeatedly are because the initial reason (such as too fine or too coarse food, “wolfing” feed, poor dentition) still exists, or because some damage to the esophagus occurred during the episode. For example, when impacted feedstuff presses on the walls of the esophagus for too long, it can cause the lining to form erosions or ulcers. In addition, a narrowing or tightening (called a “stricture”) of the esophagus can also occur following obstruction.

The advice your vet has already given you – including soaking his food or even taking him completely off grain – are both sound recommendations. Wetting hay or grain not only causes the feed to be less hard and dry and prone to “balling up,” it also gets more water into your horse. Another way of getting more water into your horse is to top dress his feed with salt to encourage him to drink more. If you still want to offer him grain, whether it’s a complete feed or simply a ration balancer, there are feeding devices designed to slow a horse’s rate of food intake down (like for dogs who gulp their food then bloat). I went the homemade route on my equine “hoover” and added Bocce balls to his feed pan, but anything 3 to 4 inches in diameter, heavy, and smooth will work. Should he ever decide to eat his hay too fast and develop a problem with forage, there are lots of options out there from as far as small hole hay nets or slow feed hay bags. Be creative, choose safely, and stay observant!