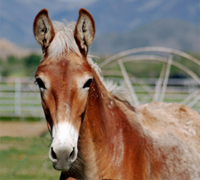 Q: I have a nine-year-old mule that gets severe reaction to the tetanus shot. He becomes very stiff and can hardly walk. The first time he received his yearly immunizations the vet gave them all in one shot, so we were uncertain which serum he was reacting to. The next year we gave them separately and found that it is the tetanus that he reacts to. Is this normal, and should I continue to give it to him yearly? I gave him Bute the other times and he has always recovered, but the reaction makes me nervous.

A: Whenever a vaccine is administered to an animal, be it a mule, dog, or human, there is a very small chance of anaphylactic shock, as the body reacts in a very profound way to the introduction of a foreign substance. Fortunately, this level of reaction is extremely rare. However, our bodies can react in other fashions that are far less dramatic (and lethal) and this is more common. Muscle soreness at the injection site has likely been experienced by all of us and sometimes we even get sick (veterinarians are all required to be vaccinated against rabies at vet school and this vaccine is notorious for making poor freshman feel like they have the flu). Animals are no exception and will run the gamut of side effects from mild soreness and a little lethargy to acting completely miserable, as you are describing with your mule. The reason behind these reactions lays in the nature of a vaccine itself and the innate variability of an individual’s immune system.

The purpose of a vaccine is simply to stimulate the immune system with a small challenge of a specific pathogen so that in the future if the animal ever encounters the same pathogen again, the immune system will already have produced antibodies (which take some time to make) against that pathogen and these will be circulating in the bloodstream, waiting to attack. In essence, a vaccine “primes” the immune system, making it a specific killing machine against whatever pathogen was present in the vaccine.

The challenge with developing a vaccine is that you obviously can’t just inject pure pathogen into an animal and hope the animal develops immunity instead of sickness. Instead, the pathogen has to be adjusted so that it still stimulates immunity but doesn’t cause disease. By doing this, you either kill the pathogen, or modify it, thereby making it much less capable of causing disease when given.

The tetanus vaccine commonly given to horses is called a tetanus toxoid. This is because it is not actually made from the tetanus bacteria (Clostridium tetani) but rather from the toxins these bacteria produce, hence the name toxoid.

Mixed with killed vaccines are substances called adjuvants. These are compounds that help increase the body’s immune response to the vaccine. Adjuvants are notorious for causing vaccine reactions. All vaccines also contain preservatives, which have also been connected as causative agents of vaccine reactions.

Whenever an animal has a vaccine reaction, it’s imperative to figure out exactly which vaccine caused the problem, which you have already done. Not all vaccines for the same pathogen are created the same way (but all still possess the same efficacy, as they are all regulated by the USDA). Is your vet using the same brand of tetanus vaccine on your mule? Trying a different company’s vaccine, if there is one, may help. Otherwise, unfortunately, this is a quirk of your mule’s immune system you will have to manage.

Tetanus is a ubiquitous organism in the environment. The American Association of Equine Practitioners (AAEP) lists tetanus as a core vaccine, which, as defined by the American Veterinary Medical Association (AVMA), is one “that protects from diseases that are endemic to a region, those with potential public health significance, required by law, virulent/highly infectious, and/or those posing a risk of severe disease. Core vaccines have clearly demonstrated efficacy and safety, and thus exhibit a high enough level of patient benefit and low enough level of risk to justify their use in the majority of patients.” Have your veterinarian report you mule’s reactions to the vaccine’s manufacturer and the USDA Center for Veterinary Biologics at 1-800-752-6255. Be sure to note the vaccine lot and serial number.

Non-steroidal anti-inflammatory drugs such as phenylbutazone (bute) are the best medical therapy to help prevent or at least lessen vaccine discomfort. I would consider giving a dose of bute to your mule twelve hours before he is scheduled for his vaccine and then ask your vet to administer a dose of bute IV immediately after giving the vaccine. Also ask your vet’s advice about further bute therapy over the next day or two. The application of compresses over the injection site may also help decrease muscle soreness. Cold compresses can be applied immediately after the injection, to minimize the body’s natural inflammatory reaction (which involves heat production). Hot compresses can then be applied about 72 hours later, to help sooth the muscles. You may also experiment with giving the vaccine in different muscle groups. Sometimes giving the injection in the pectoral muscles of the chest is less traumatizing than the neck muscle and if your mule still becomes sore, mobility may not be as impaired if given in the pectorals as in the neck.

Tetanus is a horrible disease and if not lethal, very traumatizing, debilitating, and expensive to treat. Prevention (albeit with muscle soreness) far outweighs the chance of dealing with a case of tetanus.