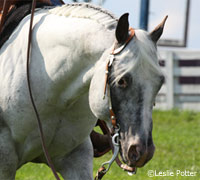 Q: I
have an 11-year-old Appaloosa gelding that is overweight. I rode him every day
during the summer and he didn’t really lose any weight. We’ve had a drought for
the past few months, so there’s not much grazing in his pasture, but he’s still
not losing weight! He goes out to a more grassy pasture every other night and
gets half a cup of grain twice a day. How can I get his weight down without
compromising nutrition?

A: The
weight-loss battle can be just as challenging for horses as it is for their
human counterparts. Gradual changes in
genetics, nutrition, and trends in general horse management over the past few
decades seem to have produced a sub-set of the horse population that is just
plain fat and determinedly so.
Historically ponies, especially of the Shetland type, have been the
primary “easy-keepers”, which is a nice way of saying an equine is overweight,
but now many horses with a Quarter Horse or Morgan background are being
described this way as well. Appaloosas,
depending on the lineage, can be of similar body type as the Quarter Horse –
average height with the potential for large muscles and a generally “stocky”
look, which seems to push the horse in favor of packing on the pounds when diet
and exercise aren’t monitored carefully, but that’s not to say the generally
lanky Thoroughbreds and fine-boned Arabians out there don’t have their share of
weight problems too.

As with
any diet plan for any species, the two keys to weight loss are to increase
exercise and decrease caloric intake.
Let’s start with the first point: exercise. The riding you describe doing over the summer
is great – keep the exercise up as much as you can and remember that five
shorter rides per week are better for your horse than one long ride a week.

The
second point, decreasing your horse’s caloric intake, tends to be more
difficult. Equine diets usually consist
of two parts: concentrate and roughage.
Let’s begin with the concentrate, which is the grain your horse is
getting twice daily. Most horses, unless
they are medically compromised, a mare in late pregnancy or early lactation, a
young growing horse, or a competitive athlete in training at top level
performance, do not need grain. The
nutrients obtained from pasture are currently enough to nutritionally sustain
your mount.

Removing
grain from your horse’s diet is the first step in cutting his calories. This may institute some “growing pains” in
your horse as he realizes his rations are being cut. Diets work best when they are gradually
instituted, so begin by slowly decreasing his grain portions instead of ceasing
them completely. Eventually, cut down to
graining once a day and then decrease the portion size to not much more than a
third of a cup, if any at all.

The
second and most important component of a horse’s diet is roughage. Providing bulk, roughage is necessary for
promoting proper gut health and motility and although roughage as a rule is not
as calorie dense as grain, pasture and certain types of hays such as alfalfa
are still loaded with sugars and protein which can pack on the pounds. You say your horse is on a grassier pasture
every other night – it is a safe bet that this pasture in combination with the
grain are what are hampering weight loss in your horse. Cutting down your horse’s consumption of this
more lush pasture can be done a few ways: either simply limit his time on this
pasture, construct strip grazing, if that’s an option, or have your horse wear
a grazing muzzle when he’s out.

In
regards to nutrition, the above recommendations to cut your horse’s grain and
grass exposure will not compromise his nutritional health. The limited pasture your horse will have
access to, assuming it’s not brown from drought, has enough nutrients to
maintain your horse’s health. If you are
still concerned, you can offer your horse a mineral block, although check the
molasses content before purchasing, as some brands tend to be more sugar than
mineral.

Although
overweight horses are not prone to heart disease and high cholesterol as are
overweight humans due to the make up of equine vegetarian diets, they are more
prone to a handful of equine-specific problems.
Laminitis seems to generally favor the overweight horse, and
musculoskeletal problems (increased wear and tear on joints and soft tissues
such as ligaments and tendons) can be made worse by carrying extra weight.

Overweight horses also seem to be more prone
to the fairly recently identified and vaguely named “equine metabolic syndrome”
or EMS. A triad of problems consisting
of obesity, insulin resistance, and laminitis, EMS has been compared to type
two diabetes, where the equine body has problems metabolizing glucose and
processing adipose (fat) tissue. Similar
in some ways to Cushing’s disease, this syndrome can be somewhat managed by
diet and weight restriction, although pharmaceutical intervention may also be
required. If your horse shows signs of
“crestiness”, or the deposition of excess fat along his crest, or other odd
places such as around the tailhead, and develops a particularly shaggy winter
coat that is slow to shed out in the spring, he may be developing EMS or
Cushing’s disease, or both. A low
functioning thyroid can also cause weight gain in horses. Contact your veterinarian, as there are a
handful of blood tests that can diagnose these problems. Preventing these problems by putting your
horse on a diet is much easier than combating these problems in the future.

5 Tips to Be Your Vet’s Favorite Client