Q: I’ve been told that fecal testing will not indicate if my horse is infested with tapeworms. So how can I find out if he has them? And if he does, how do I treat them? 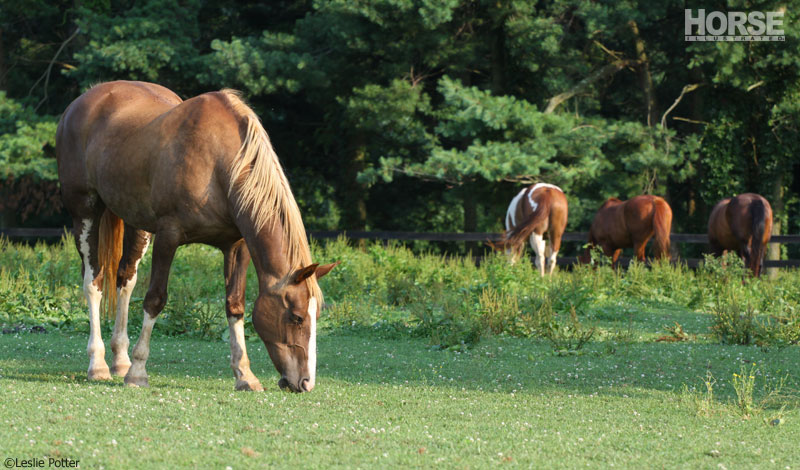 A: You have been told correctly. Tapeworms (mainly Anoplocephala perfoliata) have a different lifecycle than strongyles and roundworms, the other parasites of concern in horses. You may have seen tapeworms associated with your dog or cat and recognized them as grains of rice or seeds. That’s because tapeworms are made up of body segments called proglottids, or packets, which intermittently separate then pass with feces. These packets contain various body systems including reproductive organs and eggs, whereas the eggs of strongyles and roundworms are laid directly into the GI tract and mingle with the manure that is passed. Since tapeworm eggs are packaged (and released inconsistently), it’s difficult to detect them with traditional fecal tests, especially since they don’t float to the top in the special fluid used to separate parasite eggs from the rest of the fecal material.

In addition to their unique packaging, tapeworms have what’s called an indirect life cycle. This means that another organism MUST be present between the host (the horse) and the parasite (the tapeworm) in order for the life cycle to be complete. In this case, it’s a little creature called the oribatid mite. These mites are the ones that actually ingest tapeworm eggs, then the horse ingests the mites because they live on pasture, hay, bedding, and other materials. Once inside the horse the mites are digested, releasing tapeworm larvae which continue to develop into adult worms capable of reproduction, starting the cycle all over again.

Since tapeworms have been shown to be directly responsible for some specific, serious types of colic — spasmodic, impaction, and intussusception (where one part of the intestine “telescopes” into another part, namely the ileum into the cecum) — it’s important to keep numbers of these parasites low in your horses. But how do you do that when you can’t even measure what the numbers are in the first place?

While tests — both fecal and blood — have been developed to measure the presence of tapeworms in an individual horse, experts agree that it’s wiser just to treat once or twice a year for them. Once a year may be appropriate in parts of the country that are dry and may not be as hospitable to the oribatid mite, like the southwest US. However twice a year may be a better strategy for the Upper Great Lakes region, where over 95% of horses have been shown to harbor tapeworms. There doesn’t seem to be a seasonal component to the tapeworm lifecycle as with other parasites so time of year for deworming probably doesn’t matter, but spring and fall are being recommended because that’s when you’re administering products to treat other parasite species. Right now there are three FDA-approved dewormers for the control of tapeworms in horses and they all contain the active ingredient praziquantel. So make sure at least once a year but preferably twice annually the dewormer you are using contains this ingredient and you should be all set!

Read on for more on equine parasite control
What is a Fecal Egg Count Reduction Test
Video: How to Administer Dewormer

Throughout 2014, Dr. Lydia Gray will be answering your horse-health questions at HorseChannel.com/AskTheVet. Got a question for Dr. Gray? Send it to hc-editor@i5publishing.com and use subject line “Ask the Vet.”