Q: I recently bought a three-year-old mare. The first time we had the farrier out, she immediately became nervous and wouldn’t cooperate with them. The farrier’s assistant put a chain over her nose, which didn’t help at all. Now she doesn’t seem to trust me anymore and if I bring out a lead rope, she runs away and won’t let me get anywhere near her. How can I regain her trust, and what can I do to get her to be calmer for the farrier? 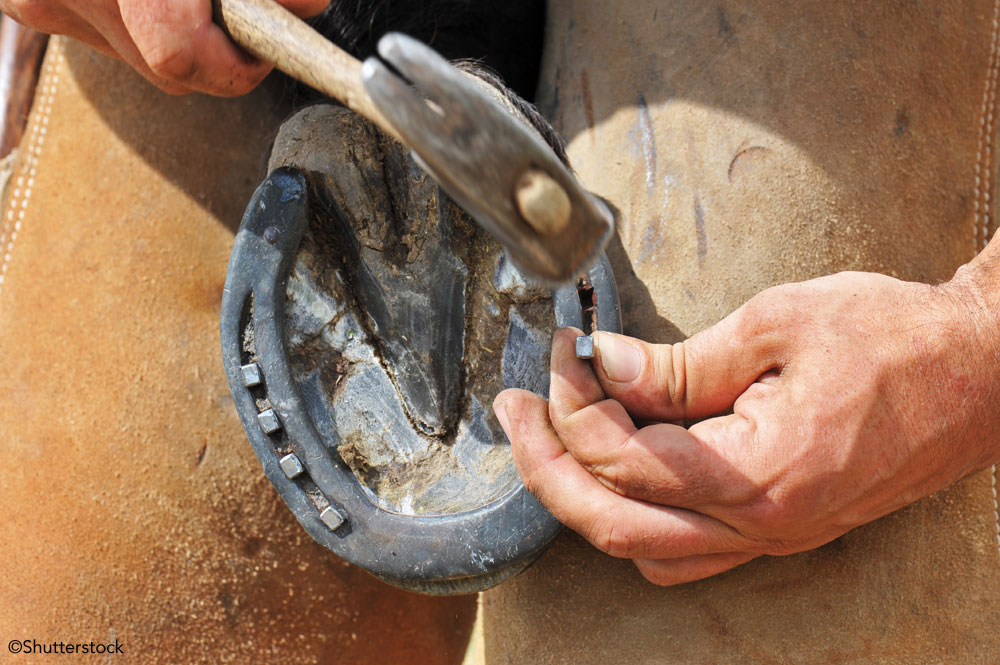 A: Let’s assume that this was an uneducated horse before you bought her. Because the mare then became accustomed to you, you gained each other’s trust. But then any time you put any pressure on her, regardless of the source — like the chain over the nose or a farrier approaching her differently than you do — the horse couldn’t tolerate that kind of pressure. The reason is because the horse hasn’t had any foundation work that would prepare her for different kinds of pressure. We have to teach the horse to accept pressure from more than just the owner. We need to teach the horse how to accept handling from a farrier, veterinarian, a handler in the barn, etc.

This is not a round pen running exercise, but you need to have at least a nice forward trot in the horse; not a tiny choppy trot, but a ground-reaching forward trot. The horse may even move into a comfortable canter. You need the horse to have that forward movement and elevated energy. Most people want the horse to just jog along, thinking it’s adequate. The problem with that is that you’re not utilizing the horse’s potential, and that jog isn’t going to create enough ‘try’ in the horse.

When the horse is moving, I will ask the horse to turn and face me. The way that’s accomplished is to watch for the horse to have one ear on you, and then move backward away from horse’s shoulder and nose. Move in a spiral backward motion away from the horse until you gradually move toward the rail and the horse has stopped its feet and looks at you. You’re actually teaching the horse to come to you on cue. It’s sort of like opening a ‘gate’ toward yourself. The horse should be willing to turn into you. Remember, the horse doesn’t trust you any more, so you have to take enough pressure off her by stepping backward and opening that space. If you only open that ‘gate’ a little bit for the horse, you won’t be successful. But by opening up a large space (stepping back in an arc formation), the horse will be much more willing to step through that space, turn and face you.

This exercise is simply moving back and allowing the horse to come through —it may take two or three tries. When the horse changes direction toward you, release the pressure. Go back to neutral by returning to the center of the round pen. Get the horse to move forward again at a rigorous trot or slow canter or lope, then ask again for the horse to turn and face you. The whole idea of the exercise is to get the horse to start listening to you and for her to realize that you’re not a predator. You’re merely asking the horse to do something by controlling its feet and space. 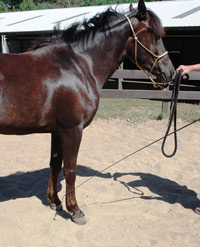 Once you’ve accomplished this exercise and the horse will stop and look at you consistently, then attach a halter and lead. Take a dressage stick and quietly stroke the horse all over with that stick. If she moves away while stroking a certain area, maintain contact until the horse stops moving. When she stops moving for even for a moment, take the stick away. The moment the horse stops moving, take off the pressure immediately. I used to use my hand for this exercise, but it’s much safer to use the dressage stick as an extension of my arm.

When the horse is comfortable with this stroking all over her body, it’s time to raise the pressure level. Try lightly bumping the horse with the dressage stick (don’t cause alarm, just up the pressure). Then stroke her again. She needs to get used to objects and pressure around her legs and body. You might get a reaction like kicking out with the hind legs. But keep doing this until the leg is quiet. Once you’ve accomplished this, then you can start picking up the horse’s feet and putting them down. Then progress to picking up the feet and holding them for a few seconds, then holding for longer periods of time once the horse is not resistant. 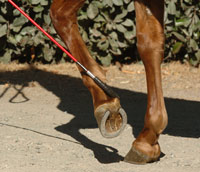 Next take a hoof pick which is light and non-threatening and just start tapping on the horse’s hoof, simulating a farrier’s action until there’s no resistance. Then do the same motion with a block of wood, then graduate to a small hammer, allowing the mare to become accustomed to each action. This will really help the horse get ready for the farrier. It’s very likely that your mare never had any experience with a farrier before and simply wasn’t prepared for what was going to happen. What follows is that we allow the farrier to train the horse, which rarely works out very well for anyone, including the horse. I’ve seen this happen many, many times.

I hope this helps, and the best of luck with you and your horse.

Charles Wilhelm is a highly-regarded trainer who resides in Northern California. For more information about his program, clinics, DVDs, etc., visit www.CharlesWilhelm.com or call 877.886.9001.