Q: I have worked with my 5-year-old mare for two years now. However, she’ll still spook out of the blue and jump sideways, and spin out from underneath me. I’ve tried desensitizing her, but it doesn’t seem to be working. What else can I do? — Rebecca Grizzle, Georgia 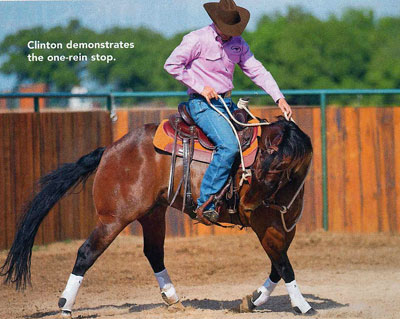 A: As a prey animal, your horse is naturally cautious of the world around her. After all, horses have survived millions of years by relying on their flight or fight instincts. Horses are big chickens; they’d rather run from anything that frightens them than hang around and fight the perceived danger.

Your job is to desensitize your horse to as many objects as you can. However, even if you spent every day desensitizing your horse to new objects, you’d never be able to familiarize her with everything. That’s why it’s important to know how to safely handle the situation when your horse does spook.

If your horse spooks and you feel like you’ve lost control, do a one-rein stop by quickly but gently pulling one rein up to your hip and holding it there until she stands still and softens to the rein pressure. Once you’re back in control, immediately put your horse’s feet to work, constantly changing directions. Jog serpentines, lope a figure eight, circle around trees on the trail, et cetera. It doesn’t matter how you make her move, just that you do it with energy and are constantly changing directions. The more changes of direction you do, the quicker your horse will relax and pay attention to you. When she’s soft and focused on you, go back to what you were doing.

If your horse spooked at a specific object, use the opportunity to desensitize her to it. For example, let’s say your horse spooks at a sign. Rather than ignoring her behavior and letting it get worse, teach her that the sign is nothing to fear. Move her feet forward, backward, left and right in front of it. When a horse gets scared of an object under saddle, I love to do rollbacks in front of the object because it quickly gets the horse using the thinking side of his brain. You’ll use your horse’s fear of the object to get her to turn and roll back over her hocks. Each time she turns and rolls back, ride her closer to the object. Horses can only think about one thing at a time, so your horse will either be thinking about the sign or about moving her feet and paying attention to you. Eventually, she will realize that doing rollbacks is much harder than actually going by the sign and she’ll stop spooking at it.

Clinician Clinton Anderson owns and operates Downunder Horsemanship in Stephenville, Texas, where his method of horsemanship has helped to transform the relationships between thousands of horses and riders. He also hosts two training programs that air weekly on Fox Sports Net and RFD-TV. www.downunderhorsemanship.com.

Train Your Horse to Tie