There’s a New Human in the stable!! She showed up today. She’s a very small human, and supposedly she’s here so she can learn about ponies… how to groom us and take care of us and even how to RIDE US. Can you believe it?! I don’t like anyone to ride me, but especially not New Humans.

The New Human’s name is Makkenzi. (Ruby says it’s spelled MacKenzie, but she doesn’t know how to spell.) Makkenzi’s the timid sort of human–the type who squeals when you make faces at her. I tried it and she jumped out of the stall.

If that’s all it takes to scare off this New Human, I don’t think she’ll be riding me too soon. 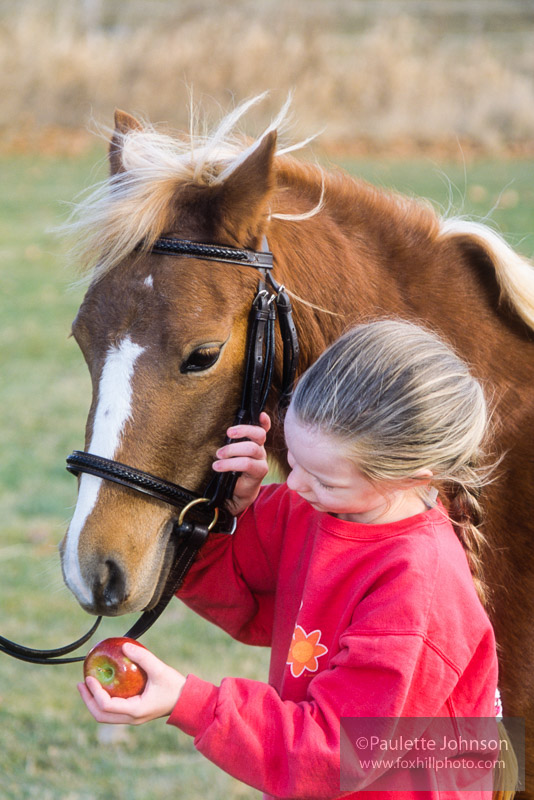 Makkenzi was back today. The humans showed her how to groom Ruby, because Ruby is “quiet.” (They always call Ruby that, but I don’t get it–she’s always seemed like a big loudmouth to me.) I think Makkenzi liked Ruby, she giggled a lot while she brushed. Ruby says Makkenzi’s a “nice, harmless human,” but I’m not sure I believe it. It’s the small humans you have to watch out for. They’re so unpredictable!

Makkenzi asked if she could groom me next, but I made a bunch of faces at her until she decided I was in a bad mood. Good. I’d rather be dirty.

Makkenzi hasn’t shown up for a few days. I wonder why? I hope she wasn’t mad at me for making faces. They weren’t really MEAN faces, and I don’t really care if she grooms me or not–it’s just the principle of the thing. I like being the one to decide things.

I hope Makkenzi comes back so I can let her know I didn’t really mean it.

Marey asked me to write today because she’s too busy. My name’s Goldie. I am Marey’s best, and most amazing friend. I am palomino and very beautiful, too.

Today MacKenzie came back and the humans wanted her to groom Marey because Marey was in a good mood today. Just when they were going to start, a big truck went down the road cutting branches and it was really loud and scary. We ponies didn’t mind too much–it happens now and then, and as long as we’re safe in the barn we know it can’t get us, but the noise really scared MacKenzie. She started crying and covering her ears, and she still wasn’t happy even after the truck went by. The humans were upset, too, because MacKenzie wouldn’t stop crying.

But I’m very proud of Marey, because she went right up to MacKenzie and started nuzzling her, and that made her forget about being upset. Marey was very nice to her, and she didn’t make a face even once during the grooming, not even when MacKenzie brushed the ticklish spot on Marey’s belly. When MacKenzie finished she hugged Marey and said “you’re the best pony ever.” I would beg to differ, but I guess she’s entitled to her opinion.

Anyway, Marey’s too busy to write all this because she’s trying to figure out how to become a therapy pony. The humans suggested it and Marey thinks it’s a great idea. Even though she’s not sure what it is.

P.S. Marey will be back next time. She never stays busy for long.

“I Do Believe in Spooks”