I’m so excited. Today, Goldie told us all about this totally awesome legend. She said that at midnight on Christmas Eve, animals can speak human words. I’ve never heard of this before, and none of the other ponies had either. We’ve always been asleep at midnight on Christmas Eve. I can’t believe I’ve missed this all my life! Just think, I could tell the humans that I don’t want the Man Who Trims Our Feet to trim my feet any more. I could tell them how much I like being scratched right on my chest. I could tell them to feed me more often and more at a time. Think of the possibilities!

We’re making plans. We’ll only have an hour, Goldie says, so we have to make the best use of our time. This is going to be the best Christmas ever. 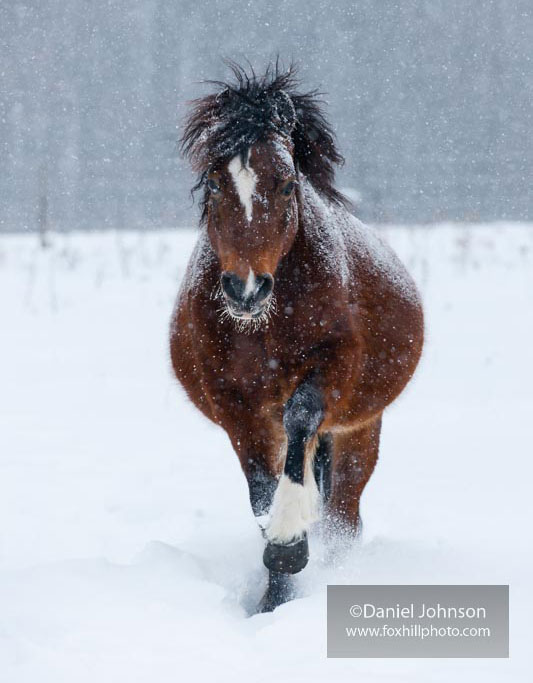 Since we’ll be able to tell the humans anything we want, we’re all working out our Christmas lists. I want a new blue halter (my old one is faded) and I want a green Jolly Ball and I want a sugar cube. Actually two would be nice but I’m not getting my hopes up. We all picked different colors of halters because the humans are so silly, they sometimes mix up Buttons’ blue halter and MY blue halter, and I don’t like it because Buttons’ halter doesn’t smell like mine.

The weather outside was frightful today, but we were all so busy we hardly noticed. I was having so much fun I didn’t want to come into the barn, and I dashed through the snow when my human came to get me. She said I was a ‘crazy pony.’ But she patted me while she said it, so I don’t think she was really mad.

Tonight’s the night! The very un-silent night when we all get to speak human words. Ruby said it’s not going to happen. We told her to shut up. Then she said even if it did happen, the humans won’t be down here at midnight so they won’t hear us talking anyway. That got us worried for a minute, but Goldie said we would all just yell really loud so the humans would come out and see what was going on. So we felt better after that.

We’ve made a pact to stay awake until midnight. We don’t want to have to wake anyone up when the time comes.

P.S. Ruby is excited too. She just tries not to show it, because she doesn’t think it’s seemly for an alpha mare to be excited.

Well…I guess we’ll have to wait until next year to find out if the legend’s really true. I tried really hard to stay awake, but I fell asleep pretty quick and I didn’t wake up until dawn. Everyone else said they fell asleep too, except Summer. Summer says she got to talk human words, but we’re not sure if we can believe her or not.

It doesn’t matter, though. When the humans came out to feed us, they brought all sorts of goodies for us; halters in all different colors, Jolly Balls and salt licks, and SUGAR CUBES for everybody! I got two. And my human scratched me right in my favorite spot in the middle of my chest. So I’m very happy.

After all, Christmas comes once a year. Next year I’ll stay awake. For now, I’m happy with all my goodies, nice humans, and a bunch of really fun friends.

Samantha Johnson is a freelance
writer and the author of several books, including The Field Guide to
Horses, (Voyageur Press, 2009). She raises Welsh Mountain Ponies in
northern Wisconsin and is a certified horse show judge. Follow her on
Twitter: @miraclewelsh