Despite the ability of many horse people to diagnose a strained suspensory at 30 paces, fix a faulty flying change with just a smidge more outside leg, or understand the intricacies involved in getting that recalcitrant tractor to start, a surprising number of us are baffled by the basic principles of equine nutrition. We’re content to believe the myths and misconceptions that flourished in our grandfather’s day, to feed whatever our neighbors are feeding … or to just plain get overwhelmed by the whole subject! The result is that a great many horses are fed more according to tradition than to sound scientific fact, and their overall health may suffer because of it.

But feeding horses really isn’t rocket science. It’s pretty simple to understand, if you try. It’s time to debunk some of those pervasive nutrition myths, and replace them with solid facts on which you can base your feeding program. 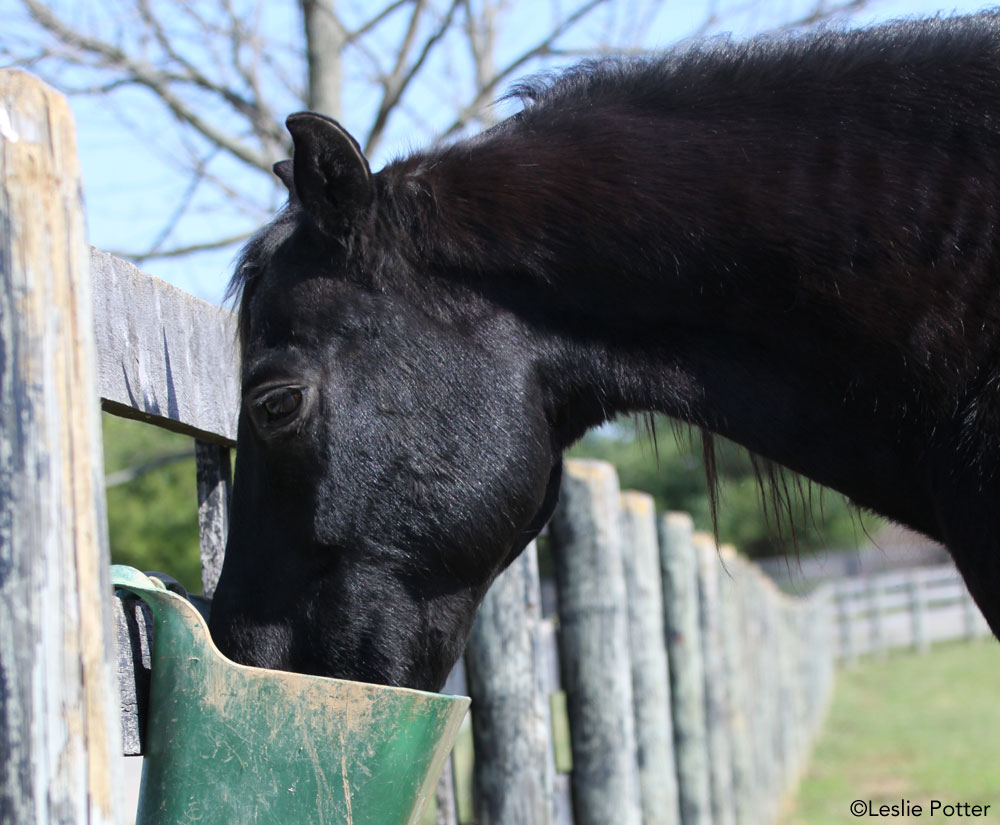 FACT: Horses evolved as grazing animals, and forage (pasture and/or hay) is still the basis of their dietary needs. The equine digestive system is designed to break down tough, stemmy plants and extract all the nutrition and energy they need from those materials. A great many horses get along very well on a forage-only diet; if your horse has finished growing and is only in light work, is an easy keeper, or is basically a happy pasture potato, he has no need for grain.

So what’s the advantage of grain? It supplies concentrated energy, in the form of carbohydrates, which some horses need if they’re being asked to do more work than what they would normally do in the wild. Show horses, racehorses and nursing broodmares can all use the extra nutritional support of grain to help fuel their higher energy expenditure. But because the equine digestive system is poorly designed to digest large quantities of carbohydrates, there’s a limit to how much grain you can feed without risking dangerous conditions like colic and laminitis. As a rule of thumb, remember that every horse should consume between 1.5 and 3 percent of his body weight in feed every day, and at least half of that should be forage, by weight.

MYTH #2: A horse in hard work needs higher levels of protein in his diet.

FACT: In a pinch, protein can be used by the horse’s body as an energy source, but it’s a very poor way to fuel performance because molecule for molecule, protein doesn’t produce much energy, and the horse’s body has to go to great effort (chemically speaking) to extract it. Carbohydrates and fats are infinitely better energy sources—far more energy-packed than protein, and easier to break down and absorb.

Protein does play a role in the diet, however: It provides amino acids, the “building blocks” for the construction and repair of muscles, bones, ligaments and all the other structures of the body. Young, growing horses, and those being used for breeding have higher protein demands because they are building new tissues. However, mature horses not being used for breeding only need about 8 to 11 percent crude protein in their overall diets to provide enough amino acids for the occasional tissue repair. The need for protein doesn’t really increase as a horse’s energy demands do, either, so there’s no need to switch to a higher protein feed if your horse is in high-intensity work.

MYTH #3: Corn/oats/barley/sweet feed will make my horse “hot,” or high-spirited

FACT: Various feeds have gotten a reputation for altering a horse’s temperament and turning him into an instant wingnut, much like sugar gets blamed for causing hyperactivity in children. To set the record straight, it’s true that horses naturally want to burn off their excess energy, so if the diet is supplying more than their current level of exercise demands, they’ll start bouncing off the walls. It’s also true that a very fit horse tends to feel really good, so his level of exuberance may increase. But no one type of feed is likely to be responsible; instead, it’s the amount of feed that’s at fault.

Certain grains may have gained a reputation for being “hot” feeds because they’ve been substituted indiscriminately for a similar volume of a lower-energy feed. Corn and barley, which have no fibrous hull, are more concentrated energy sources than oats, which do have a hull. So if you substitute a coffee-can of corn for a coffee-can of oats, then you’ll have a problem! This is why it’s so important to feed your horses by weight, not by volume. If you want to make a feed substitution, weigh your coffee-can full of oats … and then measure out the same weight in corn, or barley, or sweet feed, or whatever. Chances are, your coffee-can won’t be full! But you’ll be providing your horse with a similar amount of energy, so you won’t end up with an equine who thinks he’s one of the Flying Walendas.

Molasses, by the way, has gotten a bad rap. The amount of molasses in an average sweet feed only comes to about 1 to 2 percent of its total content—hardly enough to give your horse a “sugar buzz.” If your horse acts high when he’s fed sweet feed, it’s likely because he’s not used to the increased amount of concentrated carbohydrates. 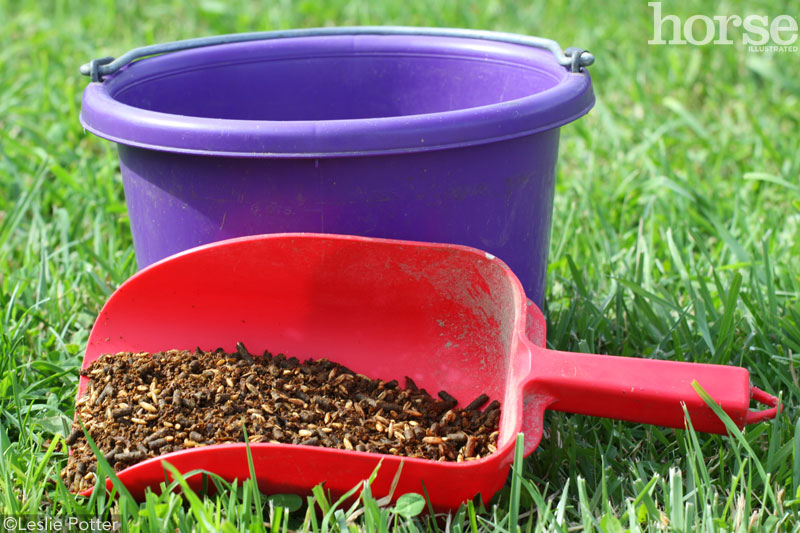 MYTH #4: When you feed a complete feed, you don’t have to feed hay.

FACT: Well, sometimes. Definitions of “complete feeds” vary from manufacturer to manufacturer—sometimes the term is used to indicate a grain ration which is fortified with vitamins and minerals to make it “complete,” but is still designed to be fed with forage (hay or pasture). Sometimes it’s used to indicate the feed contains both concentrates (grain) and forage (chopped or pelleted hay, or another fiber source such as beet pulp), and is designed to make up 100 percent of your horse’s diet. Generally, it’s best if your horse does eat long-stemmed forage (hay or pasture) along with his grain ration, for two reasons: First, it will help keep his digestive system purring along as it should, and second, it will help satisfy his natural grazing urge. But if your horse suffers from severe allergies that prevent him from eating hay, seek out a “complete feed” with a high concentration of beet pulp (more on this ingredient below). Be aware, though, that if hay doesn’t make up part of the diet, your horse may get busy as a beaver, chewing his stall fixtures, the fencelines and anything else left within reach.

MYTH #5: Sugar beet pulp is high in sugar. And if it’s not properly soaked in water, it will expand inside your horse’s gut and cause a horrible gastric rupture.

FACT: Let’s explode the myths instead of the horse. Beet pulp is the fibrous substance that’s left over after the sugar has been extracted from sugar beets. It contains almost no sugar (unless the manufacturer has added a little dry molasses to improve the taste). Beet pulp is naturally quite high in moisture and thus prone to mold, so it’s dehydrated and made into pellets or “shreds” before it’s packaged.

Beet pulp is an excellent source of digestible fiber. It’s relatively low in protein (about 8 percent) and high in calcium, which makes it an appropriate feed for almost all adult horses. If you are feeding supplements, top-dressing corn oil, or giving your horse medications, beet pulp can be an excellent place to hide the yucky ingredients. It’s a great addition to the diet if your hay is of poor quality, or if your horse has dental problems and can’t chew long-stemmed forage, or for horses recovering from an injury or illness. Plus, it’s usually quite inexpensive.

The best way to feed beet pulp is to soak it in water a few hours before meal-time; use twice as much water as beet pulp, and leave it to swell and absorb the moisture. (Because it has a tendency to ferment in warm weather, you’ll only want to make up one day’s worth at a time.) The resulting brown, fluffy stuff can be mixed in with your horse’s grain or served on its own. But don’t worry if you’ve added a little too much liquid, or too little. You can’t actually explode a horse with unsoaked beet pulp. In a study referred to in Lon Lewis’ “Feeding and Care of the Horse, 2nd ed.”, ponies were fed dehydrated beet pulp, up to a level of 45 percent of their total diet, with no ill effects whatsoever. Not only did they not explode, but they also suffered no signs of colic, nor did the water content in their manure change. However, most people prefer to soak beet pulp—it’s more palatable that way and less likely to cause choke.

MYTH #6: A weekly bran mash is good for my horse’s digestive health.

FACT: Wheat bran is actually junk food for horses. Yes, they love the taste, but it’s not really good for them. First, as a fiber source it’s not that digestible, and second, bran contains about 13 times as much phosphorus as calcium, an imbalance which can eventually affect a horse’s bone structure. Third, its famous laxative effect doesn’t really exist. Horses are quite sensitive to sudden changes in their diets, so when you feed your horse a bran mash instead of his regular meal, it causes a mild digestive upset, and the result the next day is loose manure. An occasional bran mash on a cold winter’s night does no real harm, but your horse’s digestive system would prefer beet pulp (soaked in warm water has a similar effect). If you feed bran on a daily basis, try to make it no more than 10 percent of his total diet. Avoid bran if you’re feeding a young horse—the calcium/phosphorus imbalance can interfere with his growth. On the whole, there are better feeds than bran. 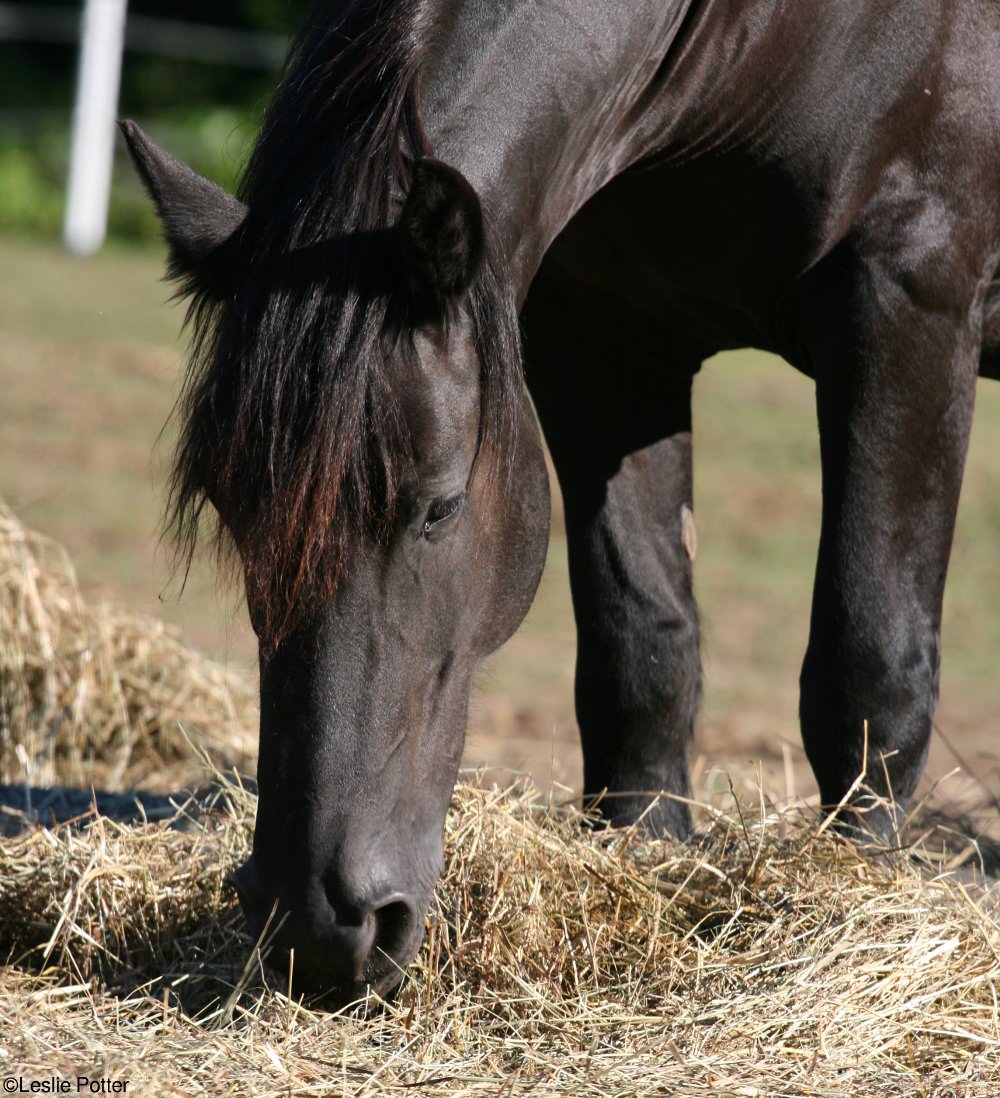 MYTH #7: Alfalfa hay is the best-quality choice for my horse.

FACT: Though horses definitely seem to prefer alfalfa in a side-by-side taste test with grass hay, alfalfa is far too high in protein for most adult horses. Depending on when it’s harvested, it can range up to about 24 percent protein—too rich for any horse other than a young, growing one or a nursing broodmare. Though excess protein doesn’t do any major harm, the kidneys have to work overtime to excrete it—and the result is excess of urine with a strong ammonia smell, which means more mucking to do! Alfalfa is usually more costly, too, and in some parts of North America it may be infested with poisonous blister beetles.

Grass hay is a better choice for most adult horses, with timothy being the most common variety; there’s also brome, bermuda and orchardgrass, among others. Though not quite as high in some vitamins, and not quite as sweet and tasty, it’s got a more appropriate protein level than alfalfa, doesn’t harbor blister beetles and is often less dusty. Mixed hays, which contain both legumes (alfalfa and/or clover or birdsfoot trefoil) and grasses, can be a good compromise too. You can get your local feed agent to do a hay analysis for about $20 to $40, which will tell you more about the nutrient content of your hay.

If you have more feeding questions, don’t be afraid to ask your veterinarian or the horse-feed specialist at your local feed store. They’ll be able to provide you with common-sense advice and help you make the best feed choices for your particular horse.