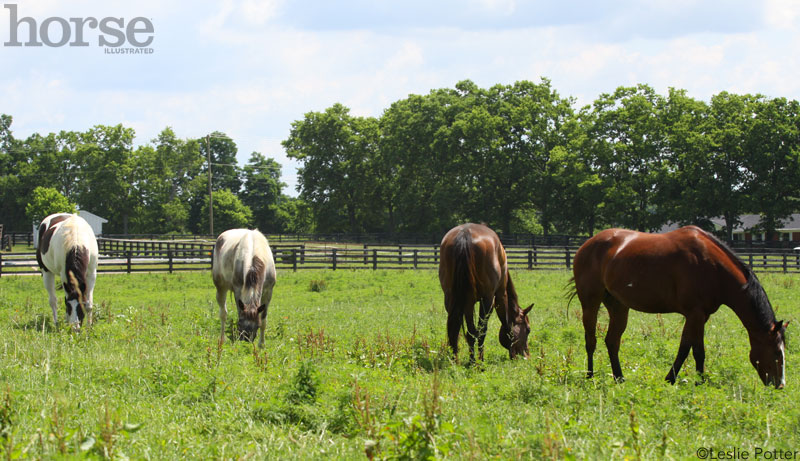 Ideas about deworming practices are constantly changing as research improves. Yet even with all the education available, horse owners tend to be creatures of habit, following old routines instead of adapting to updated recommendations. However, your horse’s health can be negatively impacted if you’re relying on outdated deworming practices.

Follow their suggestions to make sure your horse has the best protection from parasites.

Myth No. 1: Horses should be dewormed regularly year-round.

The early deworming recommendations from the mid-1960s—treat every horse every eight weeks and rotate deworming products through the year—were based on fighting large strongyles, also known as bloodworms. These parasites were indeed horse killers and often the cause of deadly colic; however, this parasite is rarely seen today on well-managed farms. (Nowadays, small strongyles are considered a primary parasite in adult horses.)

Your deworming plan should be based on your region, individual horses, and their potential exposure to parasites—not on a calendar. There is no such thing as a “one-size-fits-all” approach to parasite protection.

“Your horse’s parasites are local, so your deworming program should be tailored to the horse’s age and possible exposure to parasites, as well as climate and time of year,” says Kennedy.

For example, in the South, hot summers greatly limit parasite transmission, while harsh winters in the North do the same. That’s why your deworming program should start with climate, then look closely at your horse’s age, environment and exposure risk.

Foals and young horses will need deworming more frequently than older horses, simply because they have not yet developed immunity and are at higher risk of parasite infection.

“If you’re in a more northern climate, you may be able to refrain from giving dewormers when parasites aren’t active (winter, your non-grazing season) and vice versa for those in southern climates,” says Gray.

If you’ve been in the habit of deworming every couple months, it may be hard to accept that your horse may not need it that often.

Myth No. 2: Deworming should totally eradicate all parasites.

The goal is parasite control, not complete eradication. You should deworm enough to keep horses healthy and to decrease the risk of recontamination.

“Horses have always had parasites,” says Cheramie. “The biggest myth is that they should have none. That’s not achievable, and by attempting to do this, we’ve created resistance and made the deworming drugs we have less effective. Instead, we want to maintain the health of horses, while simultaneously maintaining the effectiveness of the anthelmintics (deworming drugs) currently available for as long as possible.”

Fecal testing is the cornerstone of modern parasite control. This allows you to identify individual horses as “low shedders” or “high shedders.” Once you know this, you can deworm each horse at the appropriate frequency: low shedders less often, high shedders more often.

“Targeted deworming is actually less work, less expensive and more effective,” says Gray. “Step one is having a fecal [egg count] performed on your horse. If it comes back less than about 200 eggs per gram [EPG], then your horse is likely a low shedder and only needs deworming once or twice a year. If the results show more than 500 EPG, then your horse is likely a high shedder and needs to be dewormed more often during the grazing season in your area.” Talk to your vet for advice about which dewormers to use, how often and when.

“Checking for the presence of worm eggs is a valuable check-up for your chosen approach to parasite control,” says Kennedy. “[But] testing must be conducted and interpreted correctly.” 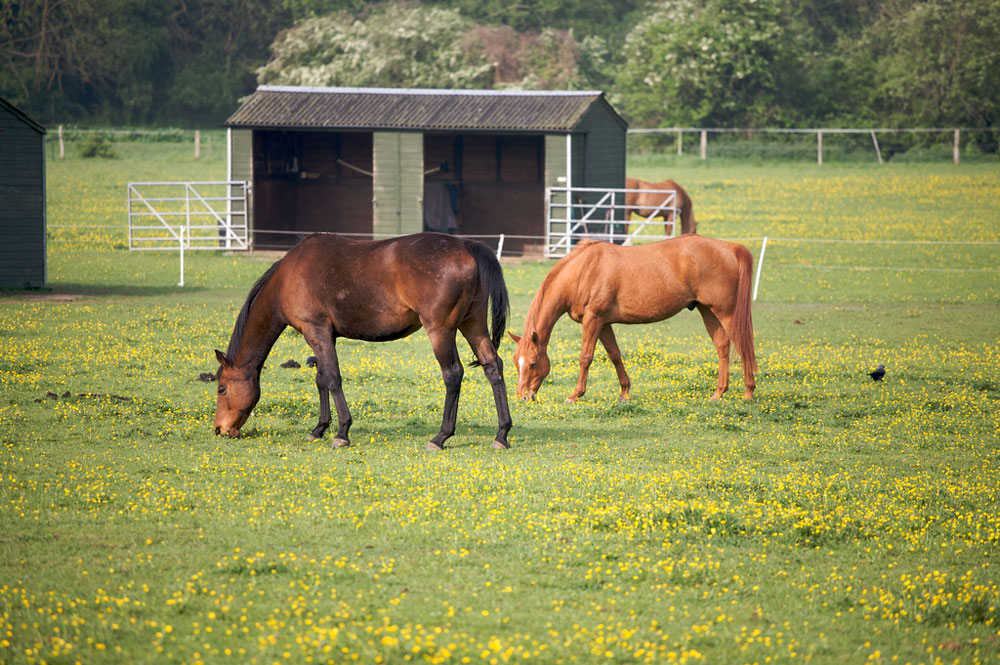 Myth No. 4: My horse’s fecal always comes back negative, so that means I don’t need to deworm him.

“A negative fecal egg count test does not mean a horse is parasite-free,” says Gray. A horse with a negative fecal may still have intestinal parasites; those parasites simply are not actively shedding eggs.

However, parasitologists emphasize that egg counts do give valuable information. Even when results are negative, these horses still need to be dewormed but will only require a minimum of recommended treatments.

“It’s important to keep in mind that even though a fecal egg count may not always directly correlate with the magnitude of an intestinal worm burden, it is still the best tool to determine parasite risk and to help direct our course of treatment,” says Morgan.

Myth No. 5: Rotating dewormers every two months is the best way to protect against parasites.

Several decades ago, horse owners were advised to rotate between the three chemical classes of dewormers: benzimidazoles (such as fenbendazole and oxibendazole), pyrantel, and macrocyclic lactones (ivermectin and moxidectin). Over the years, parasites have become widely resistant to benzimidazoles, somewhat resistant to pyrantel, and are showing emerging resistance to macrocyclic lactones.

“We’ve learned that rotating between chemical classes didn’t slow parasite resistance like we thought it would,” says Gray. “It’s important to make sure the dewormer you’re giving is still effective in your horse and on your farm. Your veterinarian can help with that by performing a fecal egg count reduction test (FECRT),” she continues. “Instead of counting eggs just once, a fecal egg count is done before deworming, then again 14 days after deworming, and the two numbers are compared.”

“To know which products work, there’s no other way to determine this but to use fecal testing on high shedders and working with your vet,” says Cheramie. “When you look at FECRT, you hope to see 90 to 95 percent or better reduction; anything less than that raises concerns about resistance.”

“Testing the efficacy of dewormers after use (through FECRT) defines the best drug for your horse,” says Kennedy. “If the dewormer you used is working and you used it correctly, you can keep using it.”

Efficacy testing should always be done on a group of horses; it is not an individual horse diagnosis.

Myth No. 6: For best protection, all horses on the same premises should be dewormed the same way at the same time.

The most effective parasite control program is based on a specific population of horses that share an environment. The drug class used also depends on the timing and the class of horse being treated.

For example, the rules for deworming foals are quite different than those for mature adult horses. Foals are susceptible to ascarids, and need to be dewormed at least four times during their first year.

It’s very important to develop a plan with your veterinarian because they know your farm management practices, your individual horses and their risk level. Once you have a targeted fecal testing and deworming plan in place as advised by your veterinarian, you can feel confident that you’re controlling parasites and reducing the risk of parasite-related colic and weight loss.

Myth No. 7: My horse never leaves the farm, so I really don’t need to worry about deworming.

Keep in mind that a horse can re-infect himself with his own intestinal parasites.

“Even if you have just one horse that never goes off site, he could still have quite a parasite load just from the eggs he himself passes and re-ingests,” says Gray.

It’s always a smart idea to take steps to limit the number of parasite eggs on the property, such as removing manure, managing the pasture so it doesn’t get overgrazed, not dragging manure to spread it over areas where horses are actively grazing, et cetera. Following these simple measures can greatly reduce the odds of your horse picking up parasites and continuing the cycle.

Myth No. 8: Fecal egg testing is the only thing I can do to protect my horse from parasites.

“The local environment determines whether transmission is likely to occur,” says Cheramie. “Small strongyles are transmitted almost exclusively on pastures.”

Eggs pass in the manure and develop into larvae, which crawl onto grass blades to be ingested by horses; this is how the cycle continues. Horses in the wild avoid grazing near manure, but this isn’t always possible in small or overcrowded pastures. Horses kept in stalls and dry lots full-time have lower risk of becoming re-infected.

As with so many things in life and nature, the 80/20 rule applies to parasites as well.

Because these horses pass more eggs in their manure, they are the ones contaminating the pasture. Keeping high shedders out of the field can significantly cut down on the number of infective larvae present.

Now that you are better armed to separate deworming fact from fiction, you can keep you horse healthier and do your part to prevent resistance to deworming chemicals in parasites.

For more, check out the Internal Parasite Control Guidelines document from the American Association of Equine Practitioners online at www.aaep.org.


CYNTHIA McFARLAND is an Ocala, Florida-based freelance writer, horse owner and avid trail rider. The author of nine books, her latest is The Horseman’s Guide to Tack and Equipment.