Castration is the most common equine surgical procedure performed on horse farms. Although veterinarians use different techniques, all routine castrations adhere to the same basic process and aftercare practices. Here are the basics that you should know if you own a colt or stallion that will be undergoing this surgery. 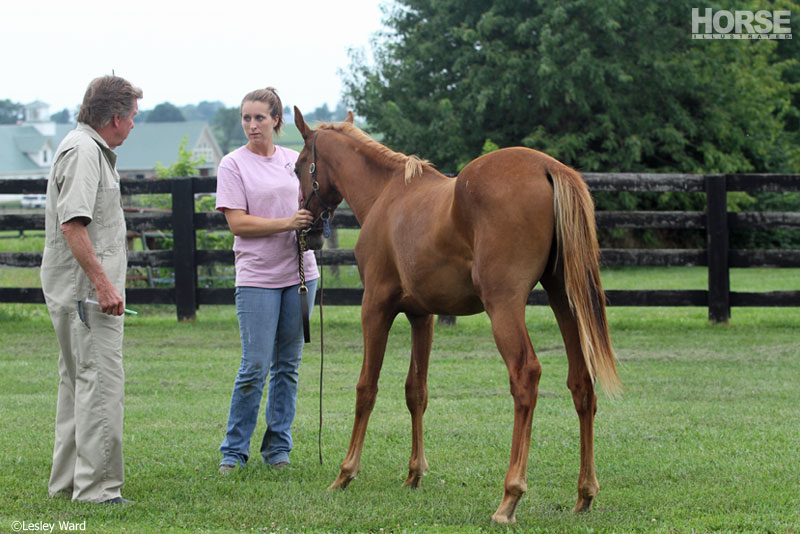 Castrations can be performed with the horse either standing or lying down. Photo: Lesley Ward

Castration, also called “gelding” in horses, is the surgical removal of both testicles. Performed most frequently in young colts, this procedure removes the primary source of testosterone from the animal, thereby eliminating unwanted stallion-like behavior, such as aggression. The benefits of having a gelding over a stallion for most horse owners are numerous. Geldings are far easier to manage than stallions. They can be turned out with other horses of either gender, and are calmer and more predictable in temperament.


Testicles fully descend from the abdomen into the scrotum by roughly 1 to 2 years of age in horses. Most veterinarians recommend gelding as soon as both testicles have descended. The younger the colt is at the time of gelding, the easier the procedure, as blood vessels to the testicles are smaller in young animals. This means there is less bleeding at the time of surgery.

Basic castrations can be performed with the horse either standing or lying down—it usually depends on the veterinarian’s personal preference.

The first step in an equine castration is sedation. The initial amount of sedation given prior to castration is based on the horse’s estimated body weight and his temperament. Most commonly, the sedative is administered via an intravenous (IV) injection in the jugular vein. Given this way, the drugs take effect very quickly, and within minutes the horse will appear quiet and relaxed, with a lowered head, droopy lower lip, and a hind leg bent and resting on the toe. At this point, the veterinarian may palpate the horse’s testicles to make sure both are descended.

If the horse is to be castrated lying down, the anesthetic drugs used to make him unconscious will be administered next. If a standing procedure will be performed, these medications will not be given; instead, the testicles and scrotum will be blocked with a local anesthetic.

The administration of anesthetic drugs to a horse on the farm is a well-orchestrated series of events that requires everyone to be attentive. After the drugs are given IV, they take effect immediately. The sedated horse will begin to stumble and then drop to the ground. A large area clear of clutter is imperative for this step; as the horse is lying down, he has little control over his movements and could be injured on anything in the way. Procedures can occur out in the pasture, in the riding ring, or wherever there is plenty of light.

Once the horse is down, most veterinarians would prefer him to be on his back with one or both hind legs in the air. Since the anesthesia lasts for a finite period—usually between 15 and 30 minutes—the vet must work quietly and efficiently to prep the surgical site, perform the castration, and clean up before the horse awakens and attempts to rise.

Both the standing and recumbent methods of castration are surgically performed the same way. After scrubbing the surgical site, the vet will make two incisions into the scrotum, one over each testicle.

Most veterinarians use an instrument called an emasculator for removing the testicles. It both crushes and cuts the spermatic cord. Crushing is required to prevent bleeding. If the horse is a large colt or an adult, the vet will also likely place stitches called ligatures around the cord to further prevent bleeding. These ligatures are made of absorbable suture material and will not need to be removed.

Once the testicles have been removed, the incision is left open. This is a very important part of the castration procedure, as it allows the surgical wound to drain slowly over the course of a week or two, reducing the chance of excessive, painful swelling.

After the surgery is finished, the horse will be positioned on his side and allowed to wake up from anesthesia. He will be groggy and unsteady when he first attempts to stand, so be sure to stand clear and give him room to find his balance. Once he’s steady and quiet, take him to his stall, a quiet paddock or a round pen. Remove all feed, even hay, until he’s is fully awake, which is generally within a few hours.

Stretch Your Horse For Better Health