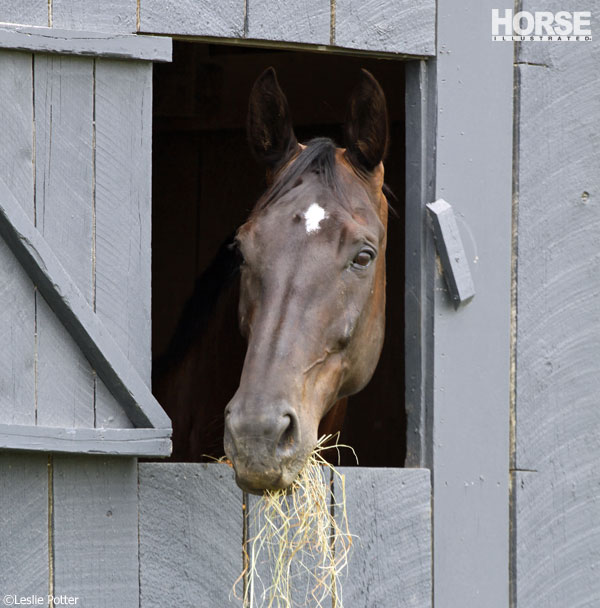 The decision about what kind of hay to feed your horse is not an easy one, even if you know a thing or two about equine nutrition. After all, with several types of hays available at your feed store, how can you possibly know which one is right for your particular horse?

We asked equine nutritionists, whose goal is to provide horses with the most balanced nutrition possible, to help explain the answer to this question.

Hay is a harvested plant that has been dried and cured after being cut in the field at various times in its growth period, depending on the type of hay. The leaves grow out first, the plant develops a bud, the bud becomes a bloom, and the bloom eventually goes to seed. In most cases, hay is cut during the late bud or early bloom phase. This method maximizes hay’s nutritional value and extends the amount of hay yielded per acre.

The fiber content of hay increases as it grows,while the protein content diminishes. Most of the protein found in hay is in the leaves, while the stalks are richer in fiber.

In order to produce quality hay suitable for feeding to horses—free of dust, mold and weeds—it must be cut at the right age and when the weather is dry and warm. After being cut, the hay dries in the field before it is baled.

A vast array of hays are commonly fed to horses in the United States, including timothy, orchard, alfalfa, coastal, oat, fescue, clover and rye, to name just a few.

Most horse owners are familiar with only a few types of hay, depending on the part of the country in which they live. However, a vast array of hays are commonly fed to horses in the United States, including timothy, orchard, alfalfa, coastal, oat, fescue, clover and rye, to name just a few.

Each type of hay falls into one of two categories: legumes and grasses. Commonly fed legume hays include alfalfa and clover, with most other hays falling into the grass family.

“Within the grasses, there are cool-season and warm-season varieties,” says Juliet M. Getty, Ph.D., an equine nutritionist in private practice in Haslet, Texas. “Cool-season grasses include timothy, orchard grass and fescue. These grasses grow best in areas where the summer season is not very hot. They have a slightly higher sugar level than warm season grasses and are therefore preferred by horses because of their taste. Warm-season grasses include bromegrass and coastal Bermuda.”

There are cereal grain hays as well, such as barley, oat, wheat or rye, which are also types of grasses. Getty cautions, “Grain hays tend to be higher in nitrates. While horses can tolerate nitrate levels up to 2 percent, it is best to have the hay tested before being fed. If this is the main source of forage in the diet, the horse will consume too much starch, leading to such problems as obesity, metabolic syndrome, and even laminitis,” she says.

In order to make the right choice for your horse’s diet, it’s important to understand the nutritional value of legume and grass hays, and how the two types complement each other.

“Grass hays have a medium to low protein content,” Getty says. “They are low in the essential amino acid, lysine. Therefore, they are best fed as part of a feeding plan that includes a legume [or a supplemental feed] to balance out the amino acid profile.”

Getty notes that the fiber content of most grass hays is relatively high, compared to other types of hays. For example, orchard grass, timothy and coastal Bermuda have more stalks, and hence more fiber, than leafier bromegrass or fescue.

Grass hays are also low in calcium, zinc, selenium and vitamin E. Timothy is somewhat higher in calcium than other grass hays and has a favorable calcium-to-phosphorus ratio; it also contains a substantial amount of vitamins A and D. When it comes to prairie or wild native grasses, these hays are typically lower in protein content than other grass hays. Their vitamin and mineral content is also lower. Generally, these grasses are combined with several weeds when grown, which pull nutrients from the grass plant.

“Grass and small grain hays vary greatly in nutritive value and palatability, depending on the variety, where it is grown and stage of maturity when harvested,” says equine nutritionist William A. Schurg, Ph.D., professor and equine specialist at the University of Arizona in Tucson. “Grass hays typically provide less protein and energy than good quality legumes. Because grass and cereal hays tend to have higher levels of fiber content and relatively low nutrient content, this makes them ‘safer’ to feed to horses in a free-choice setting. The exception to this would be fescue grass, which can contain an endophyte [an organism] which may cause problems in pregnant mares, such as abortion, stillborn foals and agalactia [a faulty secretion of milk].”

Conversely, legumes tend to be rich in nutrients and provide more energy than grass hays. Alfalfa is one of most commonly fed legumes and is widely available in many parts of the country.

“Alfalfa hay is well accepted by horses,” says equine nutritionist Robert Wright, Ph.D., veterinary scientist for equine and alternative livestock at the Ontario Ministry of Agriculture and Food in Fergus Ontario Canada. “Alfalfa hay has to be fed with some care because of its high calcium level in relation to phosphorus, which ranges from 5:1 to 8:1.” 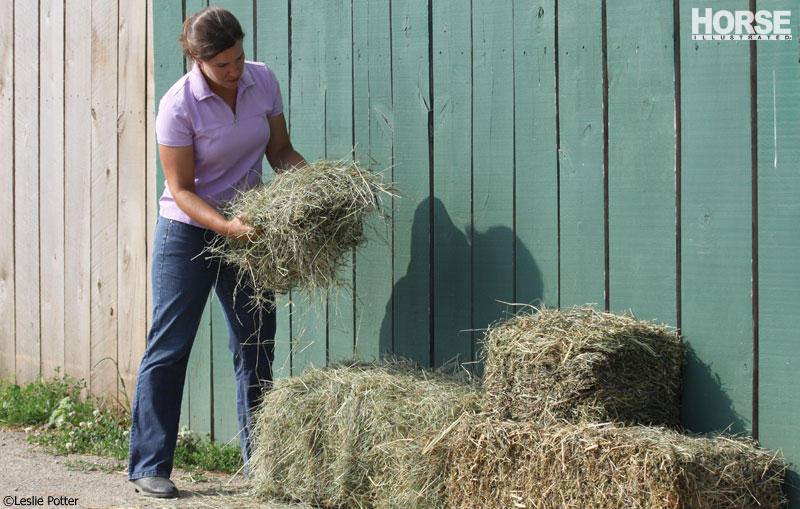 Alfalfa is an excellent source of protein and energy, according to Wright. “Adult horses require 10 to 11 percent crude protein in their overall diet, while growing horses require 12 to 14 percent,” he says. “Pure alfalfa hay, as found in second cut hay, can have protein levels up to and exceeding 18 percent protein. This high level of protein is not required for most horses.”

Wright notes that excess protein from both hay and grain feed sources is broken down into carbohydrates that serve as an additional source of energy. One downside of alfalfa consumption is that it can lead to increased urination and wetter bedding. Horses on light work schedules may also develop excess energy when fed an exclusive diet of alfalfa.

Clover is another commonly fed legume hay and one that is particularly enjoyed by horses, according to Wright. “Horses like clover and will select the highly palatable clovers from the pastures and hay,” he says. “The white clovers have 1/3 less fiber content than other roughages, such as bromegrass and alfalfa.”

With all this variation in nutritional value and digestible energy, it can be difficult to determine which types of hay to feed your horse. However, if you are like most horse owners, you’ll be limited in your decisions based on your geographic location—not all hays are available in all places. Whatever individual hays are sold in your area, the best option is to combine legumes and grasses to keep your horse healthy.

“Grass hay cannot provide all of the nutrients a horse needs to be healthy, so even the finest grass hay will require additional sources of nutrients either from other feedstuffs, such as legumes, other forages, concentrates or from supplements,” Getty says. “Grass hay acts as a staple to the diet by providing a continual source of roughage, which is necessary for the health of the digestive tract. Grass hays are lower in calories than legume hays and therefore are less likely to create weight gain.”

If a horse is being fed hay that does not have a high nutritional content, he should receive a vitamin/mineral supplement to compensate for the hay’s nutrient deficiency, Getty continues. “Vitamins, such as vitamin C, vitamin E and the vitamin A precursor, beta carotene, are easily destroyed by excessive exposure to sunlight, heat and moisture,” she explains. “Hays, especially legumes, are low in zinc and selenium, so supplementation is important here, as well. Since alfalfa is high in calcium and low in phosphorus and magnesium, it is necessary to balance it with other forages or feeds that can provide the additional phosphorus and magnesium.” 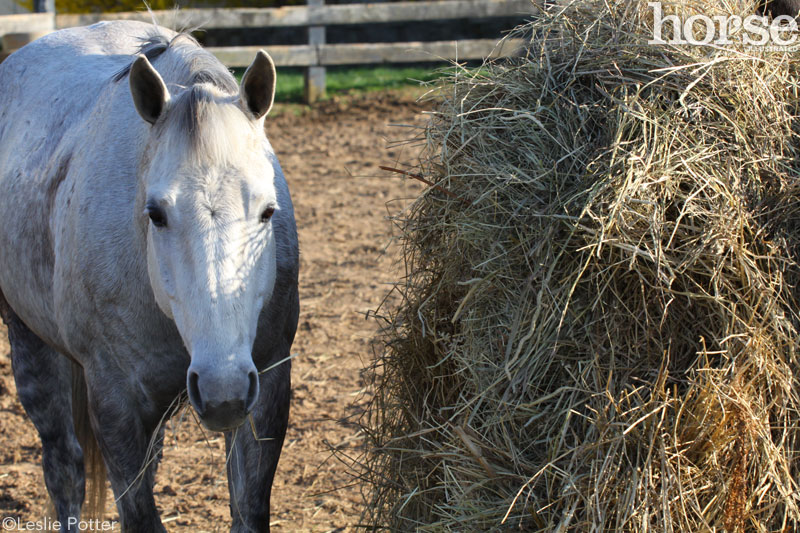 “It is true that a legume and grass combination may not meet all the needs of the horse; however, indiscriminate supplementation would not be my recommendation until an extensive hay analysis is conducted,” Schurg says. “Once one knows which nutrients are likely deficient then an appropriate supplementation program can be initiated. Too many horse owners want to add a dab of this and that and run the risk of oversupplementation. Consider that the bulk of our horses are only on light work, or less—a good quality mix hay would likely meet the primary needs of the horse at maintenance.”

Given this reality, feeding both grasses and legumes is important in order to provide the right balance of nutrients and high-quality protein. “It’s important to understand how each type of hay contributes toward this goal,” Getty says. “Legumes are slightly low in the essential amino acid methionine. On the other hand, they are high in the essential amino acid lysine. Therefore, it is beneficial to create a balance by feeding legume hays with grass hays. The high lysine content of legumes boosts the quality of grass hays, and the high methionine content of grass hays boosts the quality of legumes, thus creating a complementary protein that is of high quality.”

Feeding a poor quality protein will result in a horse that is less able to produce body proteins including muscle, bone, tendons, red blood cells, skin, hair, hooves, enzymes and antibodies. “Instead of paying close attention to the percent crude protein value of a hay, horses would be better served by mixing hays to create a feeding regimen of high quality,” Getty says.

“Horse owners should find the highest quality hay they can afford to buy within the geographical area they live in.”

Quality is also an issue when determining which hay to feed your horse, according to Schurg. “Horse owners should find the highest quality hay they can afford to buy within the geographical area they live in,” he says. “Hay will generally make up at least 50 percent of the horse’s daily diet. Horse owners need to make sure the hay is clean, is a desirable stage of maturity, is readily consumed by the horse, and is free of dust, weeds and mold.”

Schurg notes that many owners will find feeding a combination of grass with alfalfa to be the best fit for their horses’ needs. “Keep in mind that roughage is the foundation of a safe and successful feed program,” he says. “Spend time selecting the best forage you can afford to buy.”

United States Pony Clubs Symposium and Convention to be Held Where...