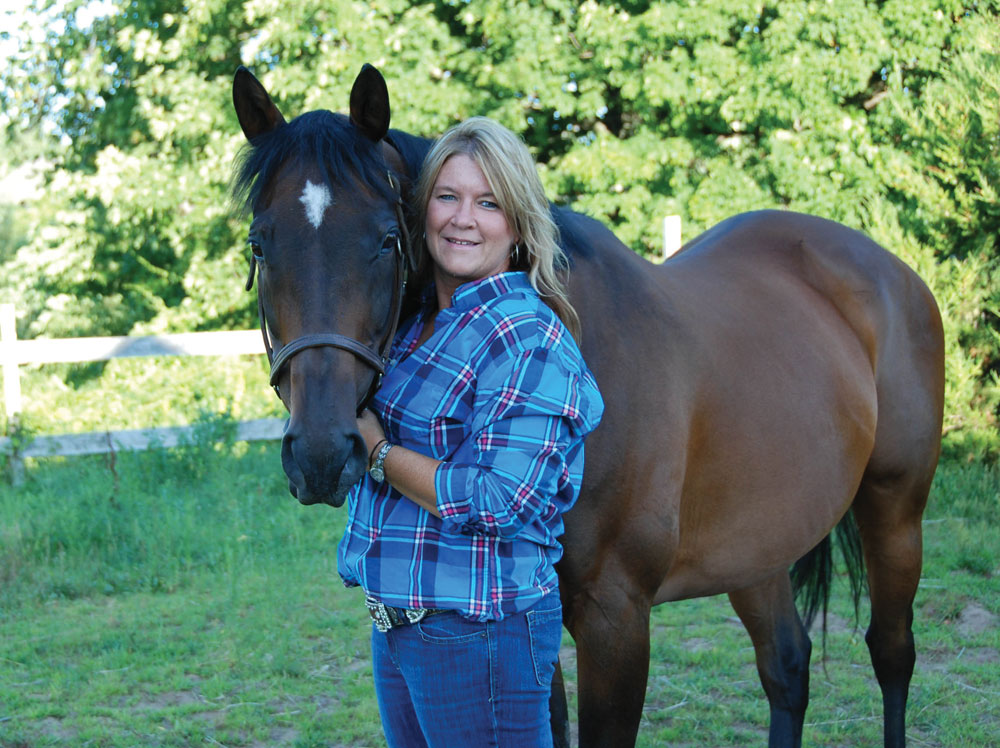 After treatment for EOTRH, owner Kym Langevin says that Peanut has never been better.
Peanut is my 13-year-old Quarter Horse/Thoroughbred gelding that I consider my third child. I purchased Peanut from my farrier when I was eight and a half months pregnant. Although I didn’t ride him until a few months after I had my daughter, it was love at first sight. He walked out of the stall and put his head on my big belly. I knew right then and there he would be with me for the rest of his life.

My story starts in the early months of 2012. Peanut stopped biting into carrots and apples. This was extremely odd to me because he is a horse with a sweet tooth—he loves treats of any kind. If I cut up the apples and carrots he would eat them; he just couldn’t bite into them. He tried, but could only scrape them with his front teeth.

This odd behavior didn’t go away, so I contacted my equine dentist. She examined him, and aside from a lot of tartar buildup she couldn’t identify the problem. I also had my vet look Peanut over. He couldn’t find anything wrong either and chalked it up to defiance, but I knew this wasn’t how Peanut would normally behave.

Over the next year, things remained the same. The only difference was that Peanut’s gums became pink and puffy—not to an extreme, but more so than usual. At his dental checkups, the tartar buildup was still a problem. He continued to eat, but was dropping quite a bit of grain. I didn’t think much of this because he had always been a messy eater. There were no issues with bridling him and riding him.

I was a little concerned about Peanut, but his personality still seemed normal. I couldn’t come up with a good enough reason to call the vet back out. However, I still had the feeling something wasn’t quite right. I searched for information, but couldn’t find any explanation for what was going on with Peanut.

By spring of the next year, I started to experience other problems with Peanut. Bridling became an issue—he didn’t want to take the bit. Within a month, I began having problems taking the bridle off as well. He would throw his head up and not drop the bit. I knew now that something was seriously wrong.

I called my equine dentist out again, and she wasn’t even able to put the speculum in Peanut’s mouth. However, this time she had an idea about what might be wrong. She told me that another client had experienced similar issues, and after several vet visits, X-rays and a consult with a specialist, the horse was diagnosed with Equine Odontoclastic Tooth Resorption and Hypercementosis (EOTRH). He had all the same symptoms as Peanut (click here to read about EOTRH).

I made an appointment to bring Peanut to a vet nearby that specialized in dentistry. I was worried about what the vet might find, but the fear of the unknown was scarier than knowing what he might possibly have.

I waited nervously while the vet took X-rays. Then, the bad news came. It was confirmed: Peanut had EOTRH in about half of his teeth. As I cried, I discussed the next steps with the vet. He told me that Peanut was in quite a bit of pain, and had been for some time. I knew we had to do something to help him. The vet explained the options. He could remove just the teeth that had the disease, but that would leave little support for the ones left in his mouth. The other teeth would eventually become affected in a matter of time and we would be right back at the same point again. If he removed all the incisor teeth, Peanut would only have to go through this once. The healing process would take time and might look worse before getting better, but in the end I would have a happy and healthy horse. I knew I couldn’t go through this again and didn’t want Peanut to suffer any more, so I told the vet to remove them all.

After surgery, all 12 of Peanut’s incisor (front) teeth were removed. Afterward, the vet showed me a few of the teeth they pulled. My knees buckled at the sight, and I was extremely uneasy about seeing Peanut after the surgery. However, to my astonishment, he was standing there munching on hay. I then went into his stall and gave him the biggest hug. His head and neck had been shaved for the surgery, but he was still my beloved Peanut. I couldn’t see anything in his mouth and decided not to look just yet.

The vet told me then what a trouper Peanut was, and that he would be just fine. At the moment, that seemed a long way off as I worried about getting him through the healing process. I was amazed that Peanut was eating hay so soon after the surgery, and the vet told me that his front teeth had been painful for so long that he had already learned how to use his lips to grab his food and then move it to his back teeth to chew. His front teeth had probably not been used in quite some time. 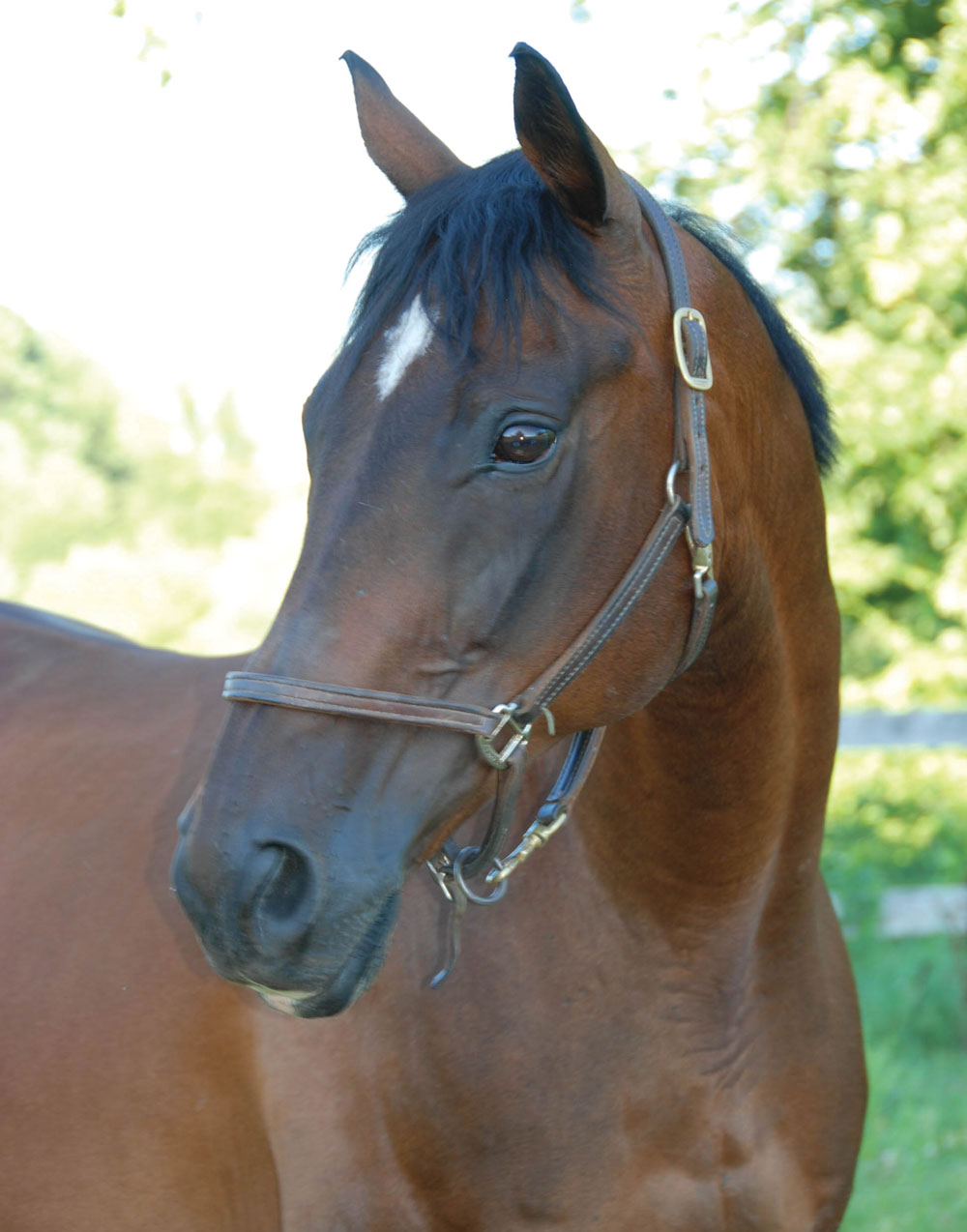 Despite having all 12 of his incisors removed, Peanut eats grain and hay, and even grazes by pulling the grass with his lips.

The Road to Recovery

After I brought Peanut home, the next few weeks were quite a bit of work. Three times a day I would go to the barn and rinse out his mouth. Because of the number of teeth that were pulled, it would take six to eight weeks for the gums to close up. Until then, I had to make sure that grass, hay and food weren’t lodged in the openings. It took a few days for him to get used to me doing this.


As the weeks went on, his mouth looked better and better. I was amazed at how normally he behaved, and I didn’t have to change his diet at all. At the end of the third week I had the OK to ride him, which would be the final test. I had to change the way I put the bit in his mouth, but once we both figured that out we were back to our regular riding schedule. Peanut felt better than ever—you could just tell by his spunk and energy. Over a year has gone by since his surgery, and I couldn’t ask for a happier horse. Pulling his teeth was the best decision I could have made for him. I have the horse I love so much back. I wouldn’t trade him for the world.