You’re in the barn aisle tacking up your horse when he ducks his head and expels a harsh, dry cough. Just one, but it gives you pause. He had started munching his evening hay when you arrived at the barn for a short ride. You wait for more coughing, but hear nothing. So, you hop in the saddle and head for the arena.

After a few minutes of warmup, you ask him to trot. In just a few strides, he starts coughing again, but this time it persists, sharp dry coughs, until you bring him to a halt. Concerned, you bound out of the saddle and look him over. He seems unfazed—bright and alert—and quietly stands while you contemplate what to do next. He snorts once as if to clear his nose, breaking you from your reverie. 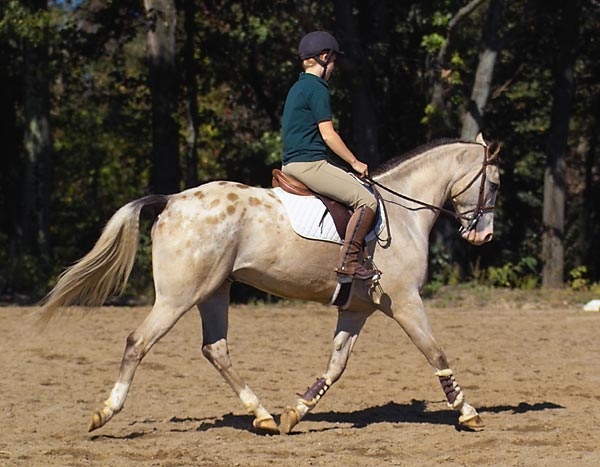 Taking the sensible route, you return him to his stall rather than risk riding him. He dives into his hay eagerly, occasionally coughing as he eats. Just to be sure, you grab the thermometer and take his temperature, and happily, it’s within normal limits, less than 101 F. You don’t think this is an emergency, so you leave him with his meal and plan to call your vet first thing tomorrow.

The next morning, your vet performs a thorough physical exam, listening with the stethoscope both before and after applying a plastic bag briefly over your horse’s nose. Once this “rebreathing bag” is removed, your horse breathes deeply so that the deepest lung sounds can be heard.

Your vet also ultrasounds your horse’s chest, looking for signs of inflammation, mucus or fluid in the lungs. Another diagnostic procedure entails passing an endoscope into the trachea to look for abnormal fluid, and then taking a sample to submit to the lab for culture.

As your vet outlines possibilities of what could be wrong, you listen carefully to the explanation. A tentative diagnosis is RAO, or recurrent airway obstruction. Your vet explains that RAO is similar to asthma in a human, but in this case your horse has likely developed respiratory allergies to mold and mold spores in hay. This has set off a cascade of inflammatory events in the lungs; the end result is RAO, historically referred to as heaves.

The Airways at Their Best

The anatomy of the horse’s airways has everything to do with his risk of developing RAO, and it affects his general health and performance. If you think of how water runs through a channel, the most efficient and fastest flow occurs in a straight line. Any curves or turns or narrowing of the channel slows the flow and creates turbulence. The same can be said of the way air flows through a tube.

A healthy horse has a streamlined upper respiratory tract: Exercise increases the horse’s demand for air so the nostrils flare open, and the soft tissues in the larynx at the back of the throat compress to increase the diameter of the tube for unrestricted airflow through the upper airways. Then, air passes into the trachea, flowing toward the lungs. Upon reaching the lungs, air follows along a path of branching tubes that get smaller in size the deeper into the lungs they go, much as branches of a tree diminish in size as they stretch farther into the sky.

The largest of these tubes are the bronchi; the bronchioles are smaller in diameter, with the alveoli being the smallest. The alveoli can be compared to bunches of grapes but are, in fact, tiny air sacs surrounded by abundant blood capillaries.

Lung inflammation causes a narrowing of the air tubes, particularly of the bronchioles and alveoli. These air tubes are lined with smooth muscle that can spasm and constrict in response to an irritation. Constriction of the “channel” causes airflow to meet resistance, which limits how much air the horse can inhale deep into his lungs. To make matters worse, a by-product of inflammation is a mucus and fibrin coating inside the alveoli and bronchioles.

In severe or prolonged cases of RAO, scar tissue adhesions effectively “glue” alveoli together in spots. With each breath, the alveoli of a “heavey” horse stick together rather than expand, or the bronchioles fail to open. With the aid of a stethoscope, your vet can hear wheezing sounds similar to what you’d hear if you ran a wet finger across bubble wrap—squeaky.

The worst changes start at the lowest part of the chest where mucus and debris are likely to collect first. Debris that collects in even the smallest air tubes stimulates a cough reflex that worsens as the lungs become more extensively affected.

The biggest challenge RAO creates for affected horses is the ability to effectively clear air from their lungs just prior to taking a new breath. The harder it is for an RAO horse to expand his lungs to breathe, the more work is created for the muscles of his diaphragm. The diaphragm’s job is to act like a bellows to compress the chest to squeeze air from the lungs and then expand the chest to allow the lungs to fill. Long-standing chronic cases of RAO develop highly exaggerated musculature around the diaphragm, along the belly near the flank. With each breath, these muscles are visually well defined, referred to as a heave line.

Prevention is the Key

Both prevention and management of RAO rely on sensible horse husbandry. It is important to house your horse in open air, such as an outside paddock or pasture, away from the mustiness and dust of a barn setting. 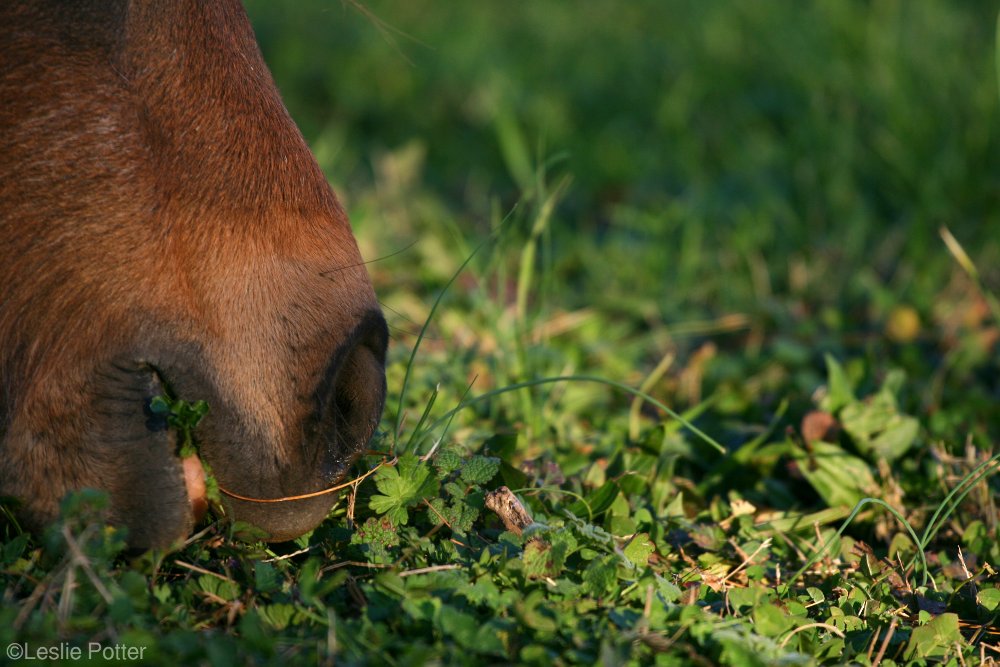 Pasture feeding enables him to eat with his head down, which limits the number of allergens that assault his airways. Most debris can be snorted away and cleared before entering the horse’s respiratory tract.

In addition, moist pasture grasses yield little dust. When pasture is not available, use feeders that allow a head-down eating position. Clean the feeders regularly to remove soiled hay or clumps of material that breed fungi and collect dust.

In winter climates or where pasture is lacking, hay is necessary to maintain good digestive function. Purchase only the highest quality hay and, for a horse with RAO, soak it thoroughly before feeding. This wetting requires more than just a sprinkle of water. Break open each flake and thoroughly soak it with a hose, or immerse it in a basin or tub for a couple of hours. Although seemingly labor intensive, this strategy will greatly reduce an allergic response from your horse.

Round bales are notorious for accumulating dust and mold spores, so avoid feeding these when possible.

Some horses are extremely sensitive to legume hays, like alfalfa. Keep this in mind when buying cubed or pelleted feed, as many of these are alfalfa based. Sometimes the fine alfalfa leaves breaking apart in improperly cured legume hay generate debris that irritates your horse’s airways

In other cases, such as in a hot and humid environment, mold grows quickly in alfalfa hay; mold spores create the damage. However, some allergic horses with RAO fare better when fed cubed or pelleted diets rather than hay. Grass silage is another alternative to offer as a “clean” feed, but make sure it is formulated for horses. You may need to experiment a little to find the correct menu to help your ailing horse.

If your horse must be housed indoors, then certain strategies will improve his respiratory health. Better “barn keeping” relies on excellent ventilation. A barn that is closed tightly, especially if heated in winter, is a breeding ground for mold, and a trap for ammonia fumes released from soiled and urine-soaked bedding. Ammonia is a strong respiratory tract irritant. 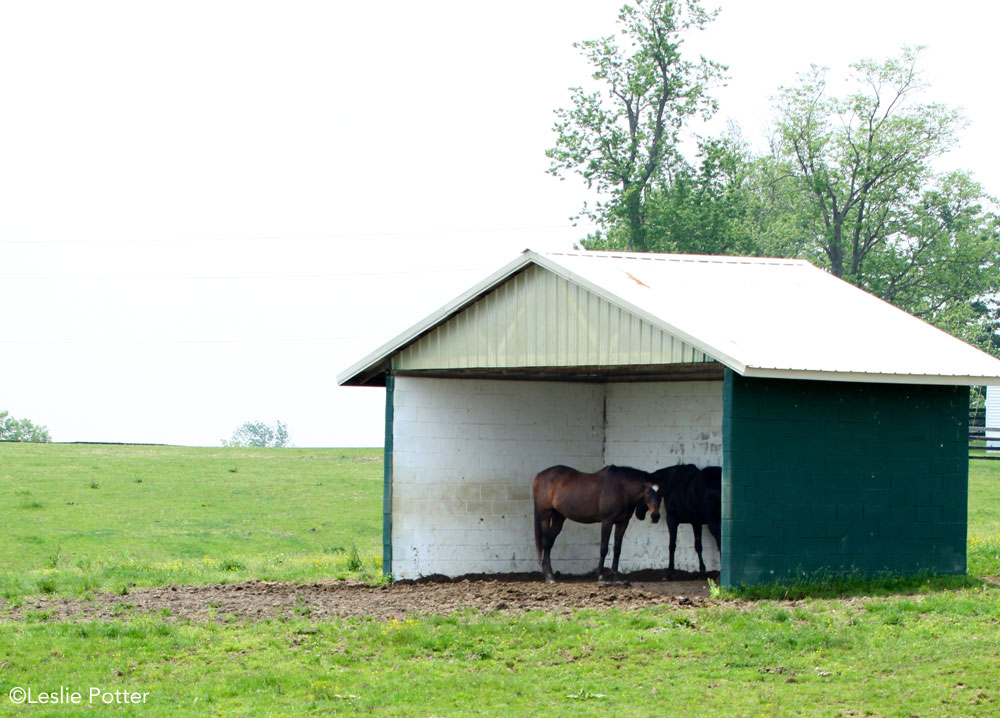 Best choices for bedding include wood shavings or shredded paper bedding rather than straw, which tends to harbor a lot of mold and spores. A horse housed on straw bedding and fed hay is reportedly exposed to 35 times more dust and particulates than a horse bedded on shavings and fed a pelleted diet.

Be cognizant of hay storage areas, too. Don’t store hay in a loft above a horse with RAO, as wind and building vibrations circulate hay dust through the air. Overhead storage is also problematic when bales are thrown from the loft at feeding time; a whirlwind of dust and mold spores may elicit an immediate allergic attack.

Additionally, fumes from tractors and motor vehicles driven through the barn adversely affect a horse’s airways. Move the horse outside to limit exposure to airborne dust during stall or aisle cleaning or periods of high traffic. Horses that are ridden in indoor arenas may be irritated by dust generated from the footing. Although dampening the footing in an indoor arena may hold down the dust, it also generates an environment conducive to mold growth.

Ideally, a horse should live outside with a spacious run-in shed to protect him from the rigors of the elements. Pasture turnout does not solve all cases since some allergens appear during certain seasons, such as springtime release of large amounts of pollen, or summer pollen release in the southeastern part of the country. Warm weather might trigger an allergic attack because a horse’s lungs work harder to dissipate heat from his body core. This may at first be recognized as an increased respiratory rate.

Environmental pollutants from traffic and/or industrial factories may push a horse past a threshold to the point that he experiences an allergic episode.

Before implementing any medical therapy for RAO, your vet must rule out a concurrent bacterial infection that adversely affects the airways. Not only do dust and mold trigger an attack of RAO, respiratory viruses or chronic respiratory infections also create similar inflammatory reactions. Routine vaccination against viral respiratory diseases helps maintain airway health.

If management of your horse’s environment and care don’t totally improve his condition, then it may be necessary to treat him with medications to reduce the inflammatory response. Some horses need daily corticosteroids (systemic or inhaled) to reduce inflammation, while others get along fine with inhalant or oral bronchodilator therapy.

More severe cases of RAO respond well to the use of an equine facemask (such as the AeroMask or Equine Haler) designed for administration of inhalant drugs. Metered dose inhalers, or puffers, can be aerosolized through the mask several times a day to control an allergic crisis, or solutions may be misted through the mask to accomplish the same end. Most horses tolerate these facemasks and treatments quite well, and come to recognize that relief is in sight when the mask is applied to the face.

The take-home lesson is that no medical therapy will improve your horse for very long if you don’t clean up the pollutants in his environment. If he continues to inhale offending allergens, you will continue to notice his cough and discomfort from RAO. This disease cannot be cured, but with careful attention to management details, it can be greatly relieved to keep your horse active and breathing as freely as possible.