Grass and legume hays have basic nutritional qualities that can provide most horses with all the sustenance they need. However, if the hay you feed is not of the utmost quality, your horse won’t be getting the right nutrition. For this reason, it’s important to inspect every bale of hay you purchase before you feed it to your horse. 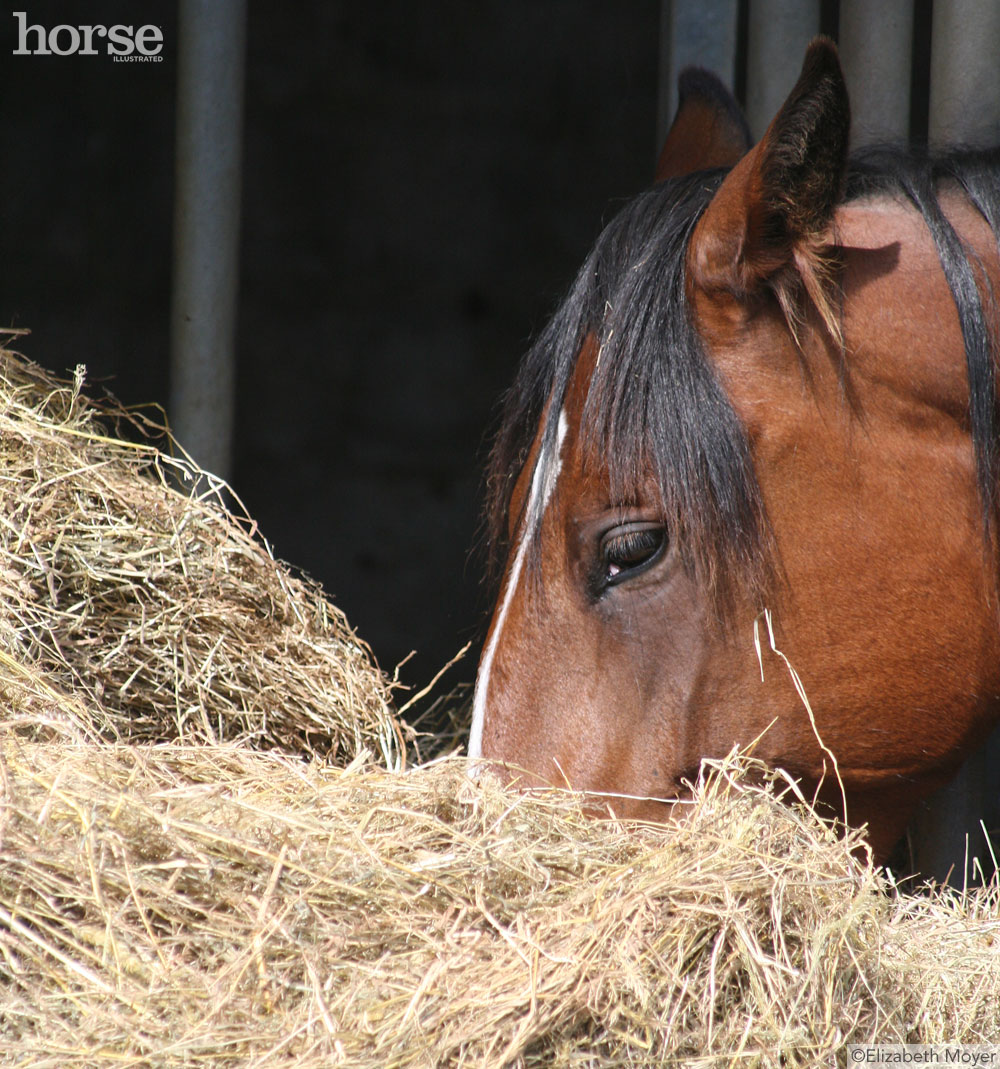 A good bale of hay should be crisp, bright in color and free of dust, since dust is an indication of mold,” says Juliet Getty, Ph.D., an equine nutritionist in Haslet, Texas. “Avoid any hay that is dark, browning or is hot to the touch, which is an indication of fermentation. When separating a flake of hay, look for any signs of mold—a white cloud of dust with a moldy smell, white or gray fuzz or blackened, dusty areas.

Legume hays are more prone to developing mold than grass hays,” she says. “Stalks and leaves should be clearly identifiable and not all packed together in a large mass. This is an indication that the hay was produced while the plant was wet. Mold is more likely to occur in this situation.”

Getty notes that hay containing a lot of thistle and other weeds has little nutritional value and should be avoided. She also recommends avoiding hay that is infested with insects.

When buying alfalfa, it’s particularly important to ask the seller if the hay is of horse quality. “If the hay is horse quality, ensure it’s not infested with blister beetles, which can be deadly,” Getty says. “Blister beetles tend to be a problem in end-of-summer cuttings, so first and second cuttings are the safest. These insects produce a toxin that can destroy a horse’s kidneys and intestines. It produces colic, and in high enough amounts can kill a horse.

“Most horses do well on a 12 to 14 percent crude protein content, if, and only if, the quality of the protein is high,” Getty says. “If a poor quality protein is fed, there will not be enough protein building blocks (amino acids) to build body tissue (e.g., muscle, bone, skin, hair, hooves, enzymes, red blood cells, antibodies, et cetera). And, consequently, the kidneys will be taxed to remove excess nitrogenous waste from the blood. If the urine has a strong ammonia-like odor, it is often an indication that the amino acids in the feed are not being utilized (due to feeding a low-quality protein).”

She adds that horses produce vitamin A from the beta-carotene that exists in plants. “So, getting enough vitamin A is generally not a problem—in fact, we see vitamin A toxicity situations in horses that are oversupplemented. Grass hays do have a fair amount of beta-carotene, but only about a third as much as the amount in alfalfa.

Alfalfa is also high in vitamin D, unlike grass hays,” Getty continues. “Horses that live in sunny areas and are kept outdoors during the day will generally produce enough vitamin D. Otherwise, supplementation is appropriate.”

Vitamin E, however, is low in most horse diets. Even alfalfa, though higher than grass hays, is quite low in this fat-soluble vitamin.” Getty says that vitamin E serves as a potent antioxidant. It also helps protect horses from stress-related damage.

Back to All About Hay >>