Use a stethoscope to count the number of heartbeats per minute (bpm) by placing the end of the stethoscope on your horse’s left side just behind and at the level of his elbow. Count each lub-dub as one beat. A normal resting equine heart rate is 28 to 40 bpm, whereas mild to moderate pain often drives it up to 64 bpm. Something of a critical nature, such as shock or an intestinal twist, will send your horse’s heart rate over 80 bpm. An increased heart rate is usually accompanied by rapid breathing and obvious signs of pain and distress. It is important to note that early stages of a surgical colic may not yet elicit high heart rates or dramatic pain.

The gums above your horse’s teeth (beneath his upper lip) should be pink and moist, like the pink color you see beneath your fingernails. Pale, brown-tinged mucous membranes or those of a muddy hue are of significant concern. Bright red or purple indicates shock.

Blanch the membranes of your horse’s gums by pressing with the tip of your finger and see how quickly the pink color returns. Normal capillary refill time (CRT) should take less than two seconds. Delayed CRT indicates cardiovascular compromise associated with dehydration and/or shock.

Pinch the skin over the point of the shoulder or on the upper eyelid to estimate how quickly it snaps back into position—it should take less than two seconds to go from a tented position to flat. One common myth is that if you see a normal skin turgor (elasticity) response, then you can assume the horse isn’t dehydrated. However, skin won’t remain tented until a horse develops at least 3 to 5 percent dehydration. Pinching the skin on the neck is misleading, since thin, wet or old horses have less skin elasticity than normal; even a sufficiently hydrated horse’s skin may show delayed return to normal.

With your stethoscope, listen on both sides of the flank, in the hollows just behind the rib cage and in front of the stifle, for sounds similar to what you’d hear when your stomach rumbles if you’re hungry. You should hear at least two or three active intestinal rumbles over a two-minute period in each quadrant of the flanks. Contrary to popular belief, just because you hear active gut sounds doesn’t mean all is well. A hyperactive gut may be noisy due to gaseous activity from over-fermenting feedstuffs or an early effort to move an impaction; loud sounds sometimes precede complete intestinal shut-down. Occasional noises similar to the sound of a penny falling down a well on the right side of the flanks indicate gas in the cecum and intestinal stagnation. Absolute quiet is worrisome, as that indicates an absence of intestinal motility and greater risk of intestinal displacement or torsion. 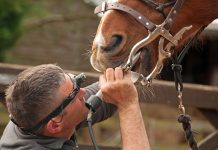 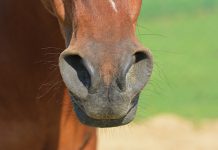 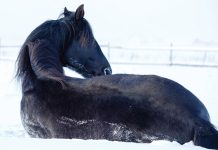