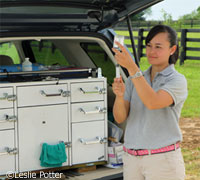 We all know it’s important to vaccinate our horses, but do we really know a lot about the diseases we are trying to guard against? Understanding these diseases can go a long way toward helping you make educated decisions about your horse, as well as help keep the equine and human communities healthy. Here is a rundown on some of the most prevalent diseases.

Rabies
Overview: Rabies is not frequently found in horses, but it is possible for them to become infected. The rabies virus is transmitted via saliva, usually from the bite of an infected wild animal such as a raccoon, fox, skunk or bat. Rabies is always fatal. Since rabies is zoonotic (meaning it spreads to humans), anyone who has had contact with a rabid animal may be at risk. Fortunately, the vaccine is extremely effective.

Treatment: There is no treatment once rabies is contracted; euthanasia is required. However, people can survive if they receive preventive care soon after exposure.

Further information: Public health consequences are significant if a horse is found to be rabid; therefore, the AAEP recently added the rabies vaccine to its core vaccination guidelines.

Tetanus
Overview: Tetanus is a disease of the nervous system caused by the spore-forming bacterium Clostridium tetani, and is often fatal. The bacterium is abundant in the soil. Spores can live in the environment for many years, which presents a constant risk to horses and people. It is not contagious, but infection can occur through puncture wounds, incisions or exposed tissue. “This is the most important vaccine for horses to get,” says D. Paul Lunn, BVSc, M.S., Ph.D., MRCVS, Dipl. ACVIM, and member of the AAEP’s Infectious Disease Committee. “The vaccine is close to 100 percent effective.”

Treatment: Injections of tetanus antitoxin, administration of antibiotics, tranquilizers and sedatives. The affected horse must be kept in a quiet, darkened stall because light and noise exacerbate the symptoms.

Further Information: Tetanus is on the AAEP’s core vaccination guidelines.

Encephalomyelitis (Western, Eastern and Venezuelan strains)
Overview: Sometimes called sleeping sickness, encephalomyelitis is a neurological equine disease that is spread by mosquitoes. Although some strains are deadlier than others, all strains infect the brain and spine. If the horse survives, he may have permanent brain damage.

“There were a number of reports in 2010 of non-vaccinated horses coming down with Eastern encephalomyelitis, so the risk is very real,” says Wilson. “However, the Venezuelan strain is not a risk at the moment, so it is not a core vaccine.”

Symptoms: Severe depression, weakness, fever and difficulty eating. Horses also exhibit strange behavior, such as walking in circles or into walls and other objects.

Treatment: Supportive veterinary care can be provided, but the disease is frequently fatal.

Further Information: Although mosquitoes are not prevalent in dry areas, the AAEP has still listed Eastern and Western encephalomyelitis on its core vaccination guidelines due to the grave nature of the disease.

West Nile Virus
Overview: West Nile Virus (WNV) infects both horses and humans. Horses represent 96.9 percent of all non-human mammalian cases of the disease. The virus is prevalent in all of the United States and most of Canada and Mexico. WNV originates in birds and is transmitted via several species of mosquitoes.

Symptoms: The virus affects the central nervous system. Symptoms mimic encephalitis and include any of the following: loss of appetite, depression, aimless wandering, walking in circles, weakness/paralysis of the hind legs, inability to swallow.

Treatment: There is no specific treatment for WNV; supportive veterinarian care is recommended. Although death can occur, the majority of horses infected with WNV recover. However, nursing a horse through WNV is no picnic. Prevention is much more cost-effective, and always preferable.

“With all the mosquito-borne virus vaccinations, people need to think about timing,” says Wilson. “It must be in the horse before mosquitoes come out.” Check with your vet for the optimal timing to vaccinate your horse.

“West Nile is occurring at a pretty consistent rate,” adds Lunn. “The disease is a real threat and more common than others.”

Further information: Vaccination is not a guarantee against infection. Since mosquitoes carry WNV, it’s important to reduce their breeding sites by eliminating or treating stagnant water. Report any dead birds found near the stable to your state department of health. WNV is part of the AAEP core vaccination guidelines.

Read about the AAEP’s risk-based vaccinations >>

My Right Horse Adoptable Horse of the Week: Oakalita Laurie —...