Simon, a sweet-natured gelding in his late teens, looks shaggy. He’s had a long, wavy coat for months and it’s now well past winter. His owner is concerned and calls the vet, who diagnoses Simon as having equine Cushing’s disease, medically known as pituitary pars intermedia dysfunction (PPID), based on clinical signs and blood tests. Simon’s owner is upset about this diagnosis, but his vet assures her this common geriatric horse disease is not a death sentence. Read more to find out how to manage a horse with PPID. 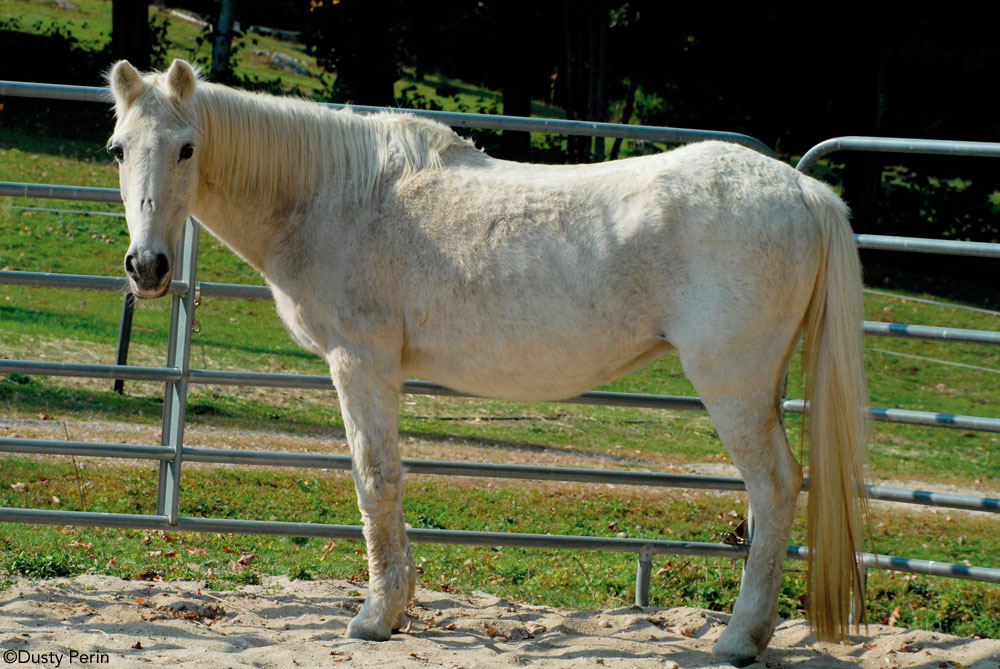 Due to its origins in the brain (see “Cushing’s Cause,” below), the bad news is that PPID cannot be cured. However, the good news is that it can easily be managed, especially when caught early. The drug of choice to manage PPID is called pergolide. The first FDA-approved pergolide for use in horses entered the market in 2011 under the trade name Prascend. Prior to this approval, veterinarians had to use other forms of pergolide obtained from compounding pharmacies.

Pergolide is a dopamine agonist, which means it works like dopamine in the brain to regulate and slow production of a hormone called adenocorticotropic hormone (ACTH). A dysfunctional pituitary produces higher than normal amounts of ACTH. This hormone signals to the adrenal glands to produce another hormone called cortisol. Constantly elevated levels of cortisol in a horse’s body produce the clinical signs associated with PPID, such as increased thirst (polydipsia), increased urination (polyuria), long and wavy hair coat (hirsutism), laminitis, muscle wasting, and poor wound healing.

Prascend is available in tablet form and is given orally. An average 1,000-pound horse typically is prescribed one to two tablets once a day, but your veterinarian will calculate the exact dose for your horse based on body weight and the severity of clinical signs.

The most common side effect of pergolide is decreased appetite. If you notice this in your horse, your veterinarian may advise you to reduce the dose for a few days until your horse is eating better, and once he is, increase the dose to the originally prescribed amount.

One challenge common to horses with PPID is that they are often underweight but sometimes mistaken for being overweight. This is not only because a long, shaggy hair coat can hide a thin body frame, but also because some PPID horses have a potbellied appearance. Horses with PPID are also prone to laminitis. The key for many PPID horses is to provide a diet that is low in starch and sugar, but high in fiber and moderate in fat.

This type of diet rules out alfalfa and grain, for the most part, leaving you instead with grass-based forage and pelleted feeds. Since many PPID horses are geriatric, carefully read the ingredient label on any senior feed your horse may be eating. Some senior feeds are high in starch to pack on the calories. Instead, consider adding a vegetable oil top dressing or rice bran to increase the calorie count for older PPID horses that are hard keepers.

Keeping geriatric needs in mind, some PPID horses may have dental issues and require easy-to-chew food. High-quality grass hay is key for roughage, and pelleted feeds, if given, may need to be soaked to prevent choke.

Some holistic research recommends the addition of antioxidants such as vitamins E and C to a PPID horse’s diet to combat the oxidative damage to neurons that has been linked as part of the cause of PPID. However, studies have not shown that increasing the levels of these vitamins in a PPID horse’s diet actually helps. Before you decide to add any dietary supplement to your PPID horse’s diet, talk with your veterinarian. She can read the ingredient label with you to determine the amount of vitamins actually in the supplement and be on the lookout for additives that may be detrimental, such as sugary binders.

A PPID horse, even under pergolide management, still has a depressed immune system. This means the horse is more susceptible to infection and the body will take longer to heal wounds. For this reason, it’s imperative to keep your PPID horse up to date on vaccines and have regular physical exams as well as fecal exams for parasites.

Some PPID horses seem prone to hoof abscesses, so make regular hoof trimming and daily hoof cleaning a priority. Routine dental care is also important to your PPID horse’s overall health for two primary reasons. First, many PPID horses are older and often require regular floating to manage sharp points and uneven tooth wear within the mouth. The second reason is many PPID horses, due to their compromised immune system, are susceptible to mouth ulcers. Oral exams with a mouth speculum and light allow your veterinarian a good view of any potential problems between the gums.

When started on pergolide, many fuzzy PPID horses will finally shed their excessively long coats. However, not all will shed, or won’t shed completely. If you live in a warm environment, you’ll need to body clip your horse in the summer months. Conversely, don’t assume a PPID horse can grow a coat thick enough to keep himself warm in the winter. Altered metabolism and old age can make it hard for some of these horses to thermoregulate, so a blanket in the winter may still be a good idea. If you notice an exceptionally fuzzy PPID horse getting sweaty in the winter, consider a moderate partial clip.

Regular grooming allows you to keep an eye out for wounds in your PPID horse. With an impaired immune system, wounds are slower to heal and have greater risk of becoming infected, so a small scratch or kick when coming in from the pasture is better to catch and clean early.

Should you ride a horse with PPID? The answer comes down to how healthy the animal is overall. If he is thin and has muscle wasting, then no. But a younger animal whose PPID is well controlled via medication and management and that doesn’t struggle with weight or other health issues could still be ridden, although stressful competition should be avoided.

Back in the old days, a brain tumor was considered the cause of PPID, and an inoperable one at that. After scaring horse owners half to death, the vet who broke the news had to allay fears by explaining there was no need to panic. These tumors were benign, meaning they wouldn’t spread to other parts of the body and they weren’t aggressive. Instead, these tumors—called pituitary adenomas—resulted in the dysfunction of the pituitary gland, a small part of the brain that releases important hormones that communicate with the rest of the body.

Not all cases of PPID are due to a tumor. Recent research has shown that aging can cause a decrease in the production of a neurotransmitter in the brain called dopamine. Dopamine helps keep the pituitary gland in check. When there are lower levels of dopamine in the brain, the pituitary gland produces hormones without restraint. Ongoing research continues to find new levels of complexity to this disease.

After a lengthy discussion, Simon’s owner was feeling much better about the PPID diagnosis. After a few months on daily mediation, some diet changes and some management checks, Simon shed his shaggy coat and wasn’t drinking as much water. Simon was clearly feeling better, and so was his owner.

Humans can also suffer from Cushing’s disease, although a different part of the pituitary gland is affected. The American neurosurgeon Harvey Cushing was the first to describe the condition (in humans) in the early 1900s. The equine version wasn’t documented until the 1960’s. Once called “equine Cushing’s syndrome” then “equine pituitary pars intermedia adenoma”, experts currently favor PPID (pituitary pars intermedia dysfunction) or simply equine Cushing’s disease.