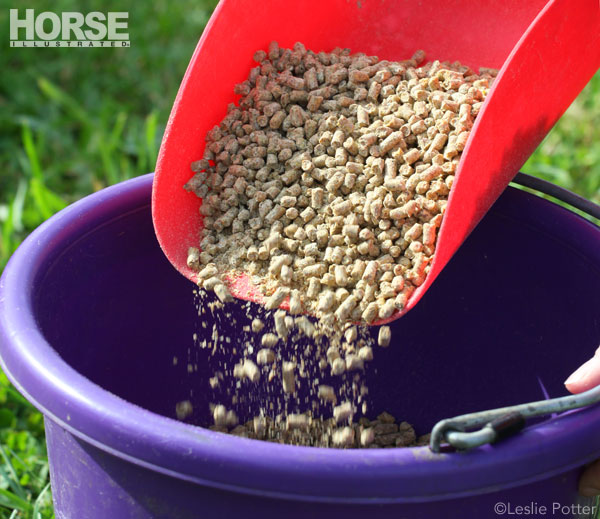 It’s a common perception that horses eat grain. But should they? Is grain really necessary in your horse’s diet? The answer is that it all depends on your horse and what you do with him.

First off, what exactly is grain? In the U.S., “grain” typically refers to oats. According to equine nutritionist Juliet M. Getty, PhD, of Getty Equine Nutrition in Waverly, Ohio, author of Feed Your Horse Like a Horse, oats are the mostly commonly fed grain in the U.S. and Canada.

“Oats can be fed whole or rolled, and be well digested in the foregut,” she says.


Other grains can include corn, which Getty says is not well-digested and therefore inappropriate for horses, as well as the bran portion of rice and wheat, often added to commercial feeds. In the United Kingdom and Australia, barley is another commonly fed grain.

To know whether your horse needs grain, it’s important to understand grain’s effect on the equine body.

According to Getty, grains are more than 50 percent starch, which is digested down to glucose, which is simple sugar.

“Glucose provides energy for cells to do work, or can be stored for later use as glycogen in the muscle or liver,” she says. “In order for glucose to enter the cells, the pancreas secretes the hormone, insulin.”

Normally, this is not an issue, but some horses are resistant to insulin, according to Getty.

“Their cells are not responsive to insulin, causing the pancreas to increase the amount secreted,” she says. “When insulin is elevated, it promotes fat storage. The more body fat, the more resistant tissues become to insulin, creating a vicious cycle.”
Getty also points out that insulin is also an inflammatory hormone, which when elevated, can lead to laminitis as well as damage to the hypothalamus portion of the brain.

“This can potentially result in other disorders, such as leptin resistance and equine Cushing’s disease,” she adds.

Given this effect on the horse’s body, grain should only be fed if your horse is doing a particular type of work.

“Equine athletes who require quick surges of energy, like in speed events, racing and jumping, do better with some starch in the diet because it is ‘burned’ anaerobically,” says Getty. “Even then, grain should not be fed in large amounts–no more than 2 pounds at a time–because it moves through the digestive tract quickly and could potentially go undigested, ending up in the hindgut to be microbially fermented. This can lead to endotoxin-related laminitis.”

Not all equine athletes need grain since not every sport requires the short bursts of energy that grain provides. Horses who are involved in endurance and slower-paced activities do better with more fat in the diet as their energy source, according to Getty. These horses still require glucose, but this is easily obtained from forages, such as hay or pasture.

If you have a non-working horse, you should keep grain out of his diet.

“Horses who are not working will do well with a forage-based diet, along with appropriate supplementation in the form of vitamins and minerals,” says Getty. “If extra calories are needed for occasional exercise, they can be provided from low starch feedstuffs, like beet pulp, soybean hulls, timothy or alfalfa pellets, copra meal, ground flax seeds, chia seeds, split peas and rice bran.”

What can happen if you feed your horse grain when he doesn’t need it? In addition to possible illnesses such as laminitis and Cushing’s disease, your horse is likely to put on weight, which will be hard on his joints.

Giving grain to your horse can be harmful to your health as well. When fed in excess, grain can make some horses hot and difficult to control, which can be dangerous to anyone riding or handling the horse.

Many horse owners like to use grain as a way to feed supplements or medications since it mixes well with powders and pellets, and encourages the horse to eat. But if you have a horse that shouldn’t get grain, what can you give him instead? Getty recommends beet pulp.

“Beet pulp is one of my favorite things to feed,” she says. “It is the pulp of the sugar beet plant, after the sugar has been removed. So the remaining pulp has virtually no sugar. If molasses is added to improve taste, it is low — less than 3 percent — that’s approximately a half-cup of sugar in 10 pounds of beet pulp. And you likely wouldn’t feed anywhere near that amount.”
Beet pulp has a lot of positive qualities, including being a good source of digestible fiber.

“This means it is easily digested by the bacterial flora in your horse’s hindgut,” says Getty. “And better yet, it doesn’t get digested in the foregut, so blood glucose levels are not affected. So it has a low glycemic index and minimal insulin response.”
So unless you are using your horse for gymkhana, jumping or racing, skip the grain. Your horse will be better off for it.

November 2019 SmartPak SmartTip of the Month: With Changing Seasons, Should...