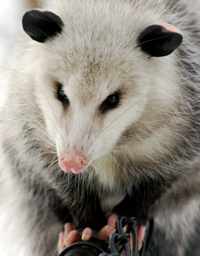 Equine protozoal myeloencephalitis (EPM) is an infection of the brain and spinal cord of horses by single-celled parasites known as protozoa.  EPM, which is the most commonly diagnosed neurological disorder in horses, can be a permanently debilitating or fatal disease. The disease is most commonly (probably > 95% of cases) caused by the protozoa Sarcocystis neurona; occasionally, another protozoa known as Neospora hughesi also can cause EPM. EPM is a disease of North, Central and South America, and is only observed in horses outside this region among horses that have been exported from the Americas. This infection is acquired by ingestion of the intermediate stages of the S. neurona parasite, which are passed in the feces of opossums and which contaminate feed and forage consumed by the horse. After the parasite is ingested, it is eliminated by the immune response in most cases.

In a small minority of cases (probably less than two percent), the organism invades the spinal cord or brain of the horse and grows, resulting in the clinical signs recognized as EPM. The organism is carried to the nervous system either directly by the blood stream, or within white blood cells that have engulfed the organism. Horses do not appear to be able to transmit the infection directly to other horses.

The clinical signs of EPM in the horse are quite variable and depend upon the anatomic location in the nervous system in which it resides. Chance seems to favor the spinal cord, and the most common clinical signs expressed are stumbling, a weak, weaving gait, and atrophy of muscles. If the brain is affected, which is far less common, the clinical signs may include blindness, inability to chew or swallow, atrophy of muscles of the head (such as the masseter in the cheek that closes the jaw during chewing), head tilt or seizures.

Diagnosis of EPM is challenging because of the variability of the clinical signs. Veterinarians depend upon three criteria for diagnosis; 1) the presence of clinical signs which are consistent with EPM; 2) ruling out other diseases of the nervous system which can look similar; and 3) laboratory tests to demonstrate that the horse has mounted an immune response to the organism. These tests, including the Western blot (WB), immunofluorescent antibody test (IFAT), and enzyme-linked immunosorbent assay (ELISA) tests, are offered commercially by various laboratories. Positive tests indicate exposure to the organism, but when the reactions are strong, and in the presence of clinical signs, these tests are considered supportive of clinical disease. Of the commercially available tests, there is no clearly superior choice. Because of the limitations of EPM diagnostic testing, other diagnostic testing (such as radiography of the neck, if deemed appropriate) should be performed to help exclude other diseases that result in similar clinical signs from consideration.

Treatment of EPM can be achieved using a variety of pharmaceuticals. Ponazuril, marketed as Marquis®, was the first licensed drug for the treatment of EPM. Diclazuril, a very similar compound to ponazuril, has received FDA approval, but has not been released by the company as of this writing. Nitazoxanide, marketed as Navigator®, and a trimethoprim-sulfadiazine combination product, Re-Balance®, have also been approved for the treatment of EPM. In similarly constructed studies, all of these compounds have demonstrated a very similar effectiveness (about 60 to 65 percent success) in treating EPM.  It is often necessary to treat for EPM beyond the recommended period on the product label of FDA-approved products.  Other treatments including acupuncture or chiropractic manipulations, various herbal remedies, immune modulators or hormonal drugs have no scientific support at this time.

The ideal prevention would be an effective vaccine against S. neurona. Though substantial research has been directed at this, no effective vaccine has been developed. Evidence from clinical trials also is lacking for other recommended preventive strategies.  Based on observational studies, it is proposed that methods including preventing exposure to S. neurona through keeping feed in a sealed bin, cleaning up spilled grain so that opossums are not attracted to the feed area, and feeding horses off the ground may help prevent EPM.

Application of products directly to feed to kill the S. neurona organism have no basis for effectiveness, and are not advised. Pretreatment of horses with ponazuril has been shown to decrease the risk of infection with S. neurona, and may in some circumstances be beneficial. For example, shipping stress is a known risk factor for development of EPM, and pretreatment with ponazuril prior to and during periods of similar stress may decrease the risk of disease.

The EPM story is truly a success story for modern veterinary research. Twenty-five years ago, we became aware of an enigmatic parasitic infection of the nervous system of the horse. Since then, veterinary and affiliated scientists have determined the cause of the illness, worked out a complicated life cycle, described the epidemiology of the disease, developed specific tests to diagnose infection and developed pharmaceutical agents to treat the infection. This highlights the importance of research in all aspects of an illness, and its contribution toward the final goal of effective means of prevention or treatment in individual animals. 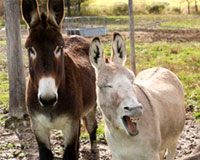 Guidelines for Donkey Dental Care Released by The Donkey Sanctuary