Q: I have a fast-growing, somewhat overweight 2 ½-year-old gelding. He is already 15.3 hands, which is large for his breed. He recently developed some swelling around the fetlock and cannons of both back legs. One was worse than the other, but both were noticeably swollen. They were hot to the touch and seemed a little painful to palpate. However, he was not lame at all. I initially pulled him out of his full-time pasture and put him in a stall, but that caused the swelling to become worse by the next morning. I have also cold-hosed his legs twice a day for 15 minutes. The swelling was gone in three to four days, but came back after a week. With more cold hosing it disappeared in about 24 hours. I’m worried about epiphysitis, especially since he is still in that awkward growing phase. Could it be epiphysitis? 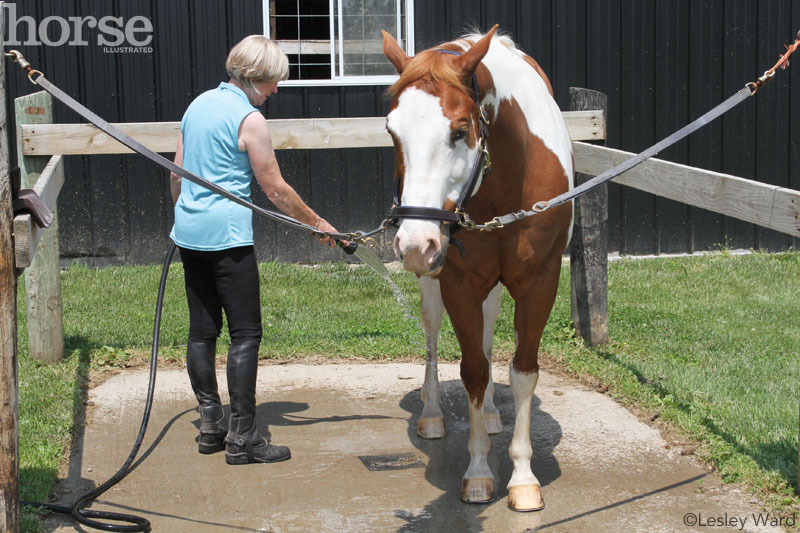 Cold hosing a horse’s leg won’t always resolve the symptoms of epiphysitis, but it can usually help control acute onset swelling from any cause.
A: There is no question that a fast-growing horse is particularly prone to epiphysitis, which is more correctly termed physitis, indicating inflammation of the growth plates. The fetlocks are commonly involved in epiphysitis cases, and it is not unusual to see both legs swollen at the same time, although not quite symmetrical.

There are multiple risk factors for this condition, which is part of the syndrome known as developmental orthopedic disease (DOD): fast growth rates; genetic predisposition; dietary imbalances, specifically excess calories or mineral imbalances; and/or overuse while at play in pasture. In this case, the fact that the swelling comes and goes in such short periods is not typical of epiphysitis. And, while it isn’t common for it to disappear with just a little movement in the pasture or subsequent to cold hosing, it is possible in the very early stages. The cold water hosing can be especially helpful to control acute onset swelling and inflammation, regardless of cause.

As you suggested, there are other possible reasons for bilateral hind limb swelling. These include overuse and strain; lymphatic stagnation often seen in a horse confined to a stall or small paddock; and viral or bacterial infections.

Unrestricted exercise on pasture is not advisable with epiphysitis, but some movement is important for general health and well-being. The decision to confine or turn out is best made when you have arrived at an accurate diagnosis.

Whenever you see leg swelling that doesn’t abate within 24 hours, it’s a good idea to call your vet to examine your horse and rule out something serious, such as a musculoskeletal problem like DOD that could have long-lasting repercussions on your horse’s athletic abilities, and also to rule out a possible contagious disease like a viral or bacterial infection. If your horse is suffering from epiphysitis, then dietary modifications are a critical element to healing, and that is best done by working with your veterinarian.

Nancy S. Loving, DVM, is a performance horse veterinarian based in Boulder, Colo., and is the author of All Horse Systems Go.