On any given day, the average equine veterinarian may see and treat a variety of conditions, illnesses and injuries—and those are just the scheduled cases. When the cell phone rings with an emergency call, there’s no telling what kind of trouble a horse might be in.

To get a taste of what veterinarians might have to deal with, we invite you to ride along on these unusual emergency calls.

Some emergencies require not only treatment of a horse in trouble, but also involve a rescue. That’s exactly what Christine Staten, DVM, came upon the afternoon of June 3, 2014. A partner with Adobe Veterinary Center in Tucson, Ariz., Staten got the emergency call from White Stallion Ranch, a regular client.

Earlier in the day, a contracting company had been at the ranch to dig a new septic system. The project involved digging channels approximately 6 feet deep that would allow drainage for the septic system, which was being installed in a larger hole approximately 12 feet deep and 20 feet across. For safety’s sake, all horses were moved off the lot and pipe fence panels were set up around the area as an extra precaution. 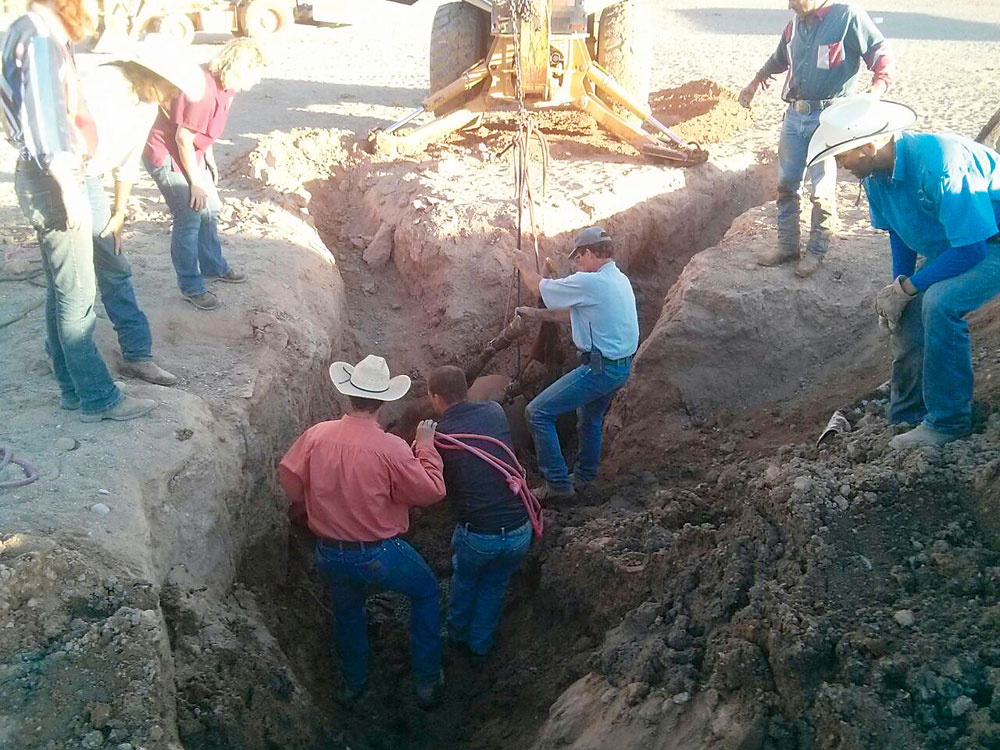 No one saw how it happened, but a curious 26-year-old Thoroughbred gelding named Ice managed to get into the fenced-off enclosure, apparently by pushing against the panels. When he was discovered, Ice was in one of the narrow channels leading into the larger hole. Manager Steven True was driving by the enclosure and happened to see the head of the horse who was desperately trying to get out of deep mud.

“The channel he was in was part of the leach field of the previous septic system, so it was very mucky and he was sinking in the mud,” says Steven, who immediately radioed for help. His uncle, Michael True (the ranch is owned and operated by the True family), quickly arrived with shovels and the men began trying to dig the frantic horse free.

Unfortunately, the panicked gelding flipped over backwards out of the channel into the deeper part of the hole. There, he rolled onto his right side. His back was up against the side of the hole, but his right front leg was wedged under an exposed leach pipe.

“We climbed down to Ice and got a halter and lead rope on him, hoping we could get him up and walk him out, but we realized this wasn’t going to be possible, so we called Dr. Staten,” says Steven. “We put blankets against the side of the hole to protect him and just tried to keep his head steady while we waited for her. We also called a friend with a backhoe and he came and dug a new channel, trying to make another path out.”


Although Steven had given Ice a sedative under Staten’s orders, the horse was still very upset. 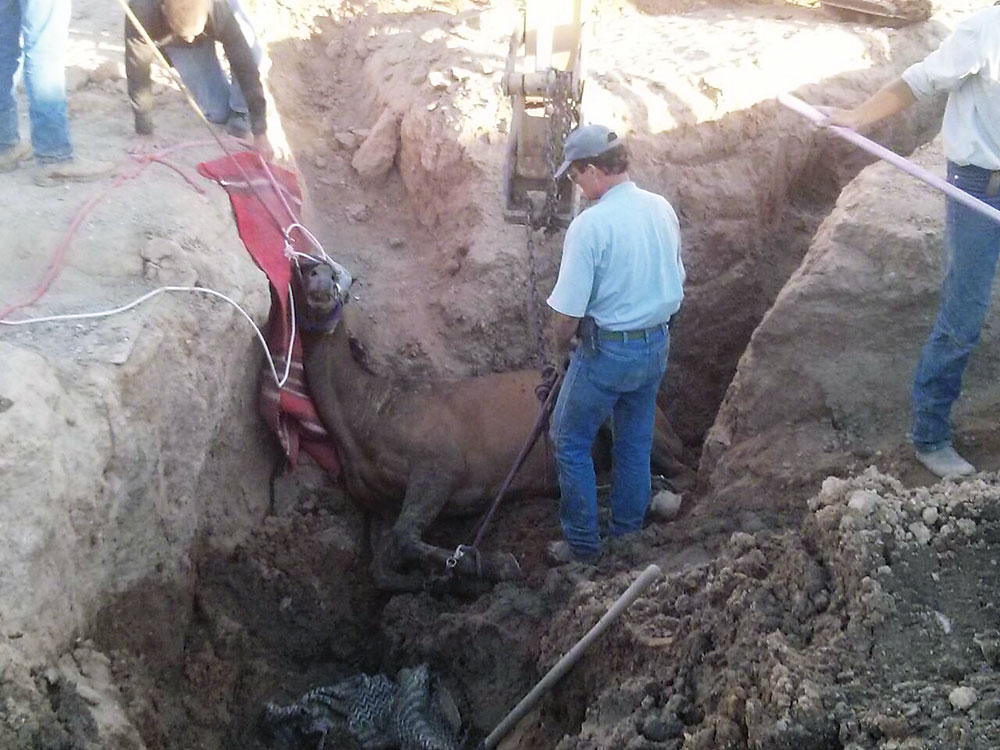 When Staten arrived on the scene, the situation looked dire. “This was an older horse and he was very distressed,” she recalls. “His heart rate was more than double the normal rate and his respiratory rate was incredibly elevated. There was so much mud at the bottom of the hole that we couldn’t see the horse’s legs clearly. We couldn’t tell if any were broken or caught around the leach pipe.”

Staten was able to further sedate the horse and then put him under general anesthesia. Under the circumstances, getting a needle into the horse’s jugular vein was no easy task. Michael put a rope around Staten’s waist and held it firmly to keep her from slipping as she leaned into the hole. Once Ice was completely sedated, Steven and Michael were able to safely work to free his leg from under the pipe. Fortunately, the leg wasn’t broken. 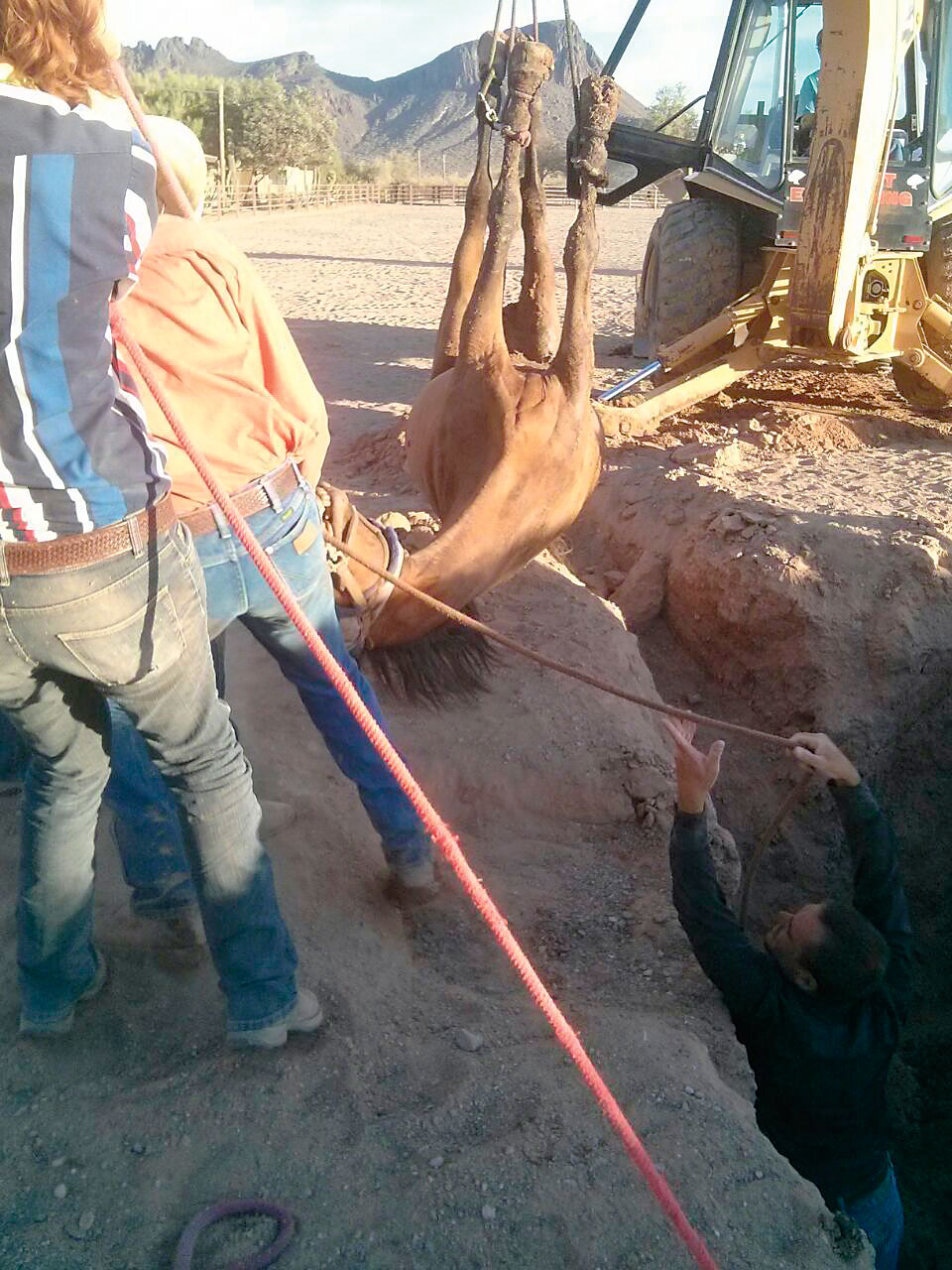 A horse’s legs are incredibly strong and able to hold the weight of his body. Knowing this, Staten outlined the rescue plan.

With old lariats, Steven and Michael True used half-hitch knots to tie the gelding’s front legs together at the pasterns and his back legs together in the same manner. To maintain even pressure, the ropes were then figure-eighted together and attached to the contractor’s backhoe. As Staten helped steady the limp head and neck of the unconscious horse, the backhoe operator slowly raised the now upside-down horse out of the hole. Once his body cleared the hole, the backhoe was lowered so the horse was lying on his side, some distance from the dangerous pit.

The ropes were removed from Ice’s legs and Staten went to work, running intravenous fluids and treating him with eye medications, additional anti-inflammatories and strong opioids for pain control. 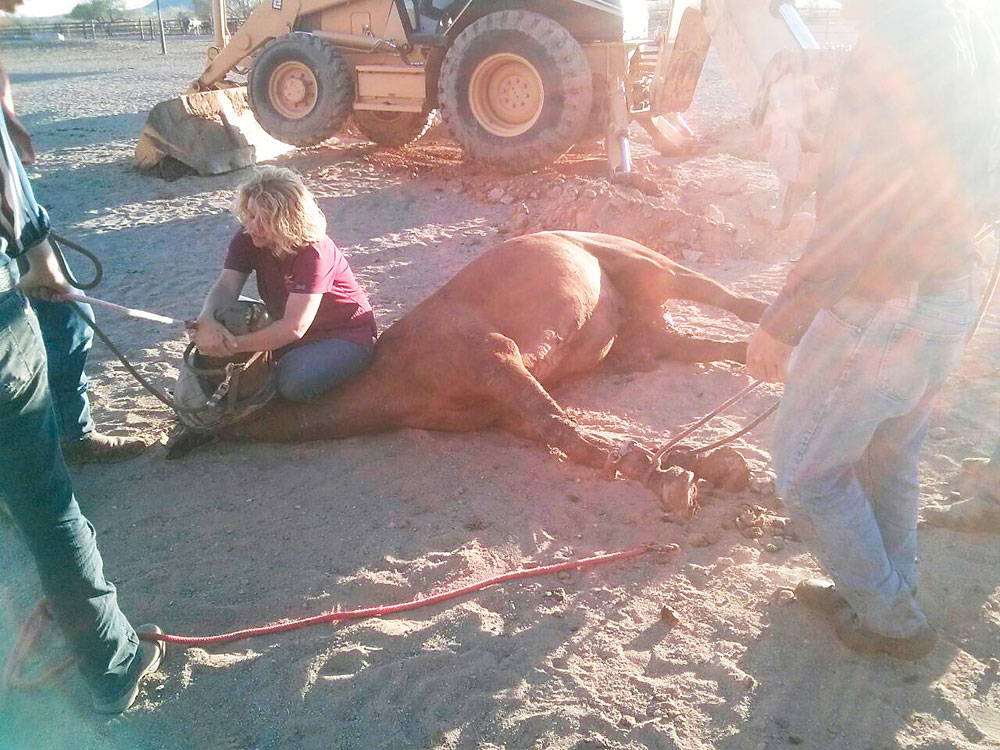 As the anesthesia wore off, the horse regained consciousness and got to his feet.

“His face was swollen from where he’d hit his head on the sides of the hole before he was sedated, and he had some lacerations on his body,” says Staten. “We had to clean up his wounds, remove debris and apply bandages for support. When I drew blood, his muscle enzymes were off the chart because of the stress he’d been through. He was very lame and it took a while to slowly walk him to the hospital pen.”

Steven and the ranch employees dutifully treated Ice’s wounds and kept him on stall rest while he recuperated. Hydrotherapy was also used to help reduce swelling and soreness. When Staten came out for another check six days later, Ice showed no sign of lameness.

On June 18, when Staten returned for a recheck, the gelding’s wounds were almost completely healed. Ice went back to work in the riding string about three months after the incident, none the worse for his dramatic adventure.

“These guest ranch horses are cared for better than many [privately owned] horses I see,” says Staten. “I saw this horse recently and wouldn’t have even recognized him from that day last June. Every rescue scene I’ve been on has been so unique. What a vet brings to the scene is knowledge of equine anatomy and how to use drugs appropriately. For example, knowing that the horse’s legs would be strong enough to withstand pulling him out of the hole that way. Ultimately, it takes a team to pull off such an amazing rescue. I couldn’t have asked for a happier ending.”

CYNTHIA McFARLAND is an Ocala, Florida-based freelance writer, horse owner and avid trail rider. The author of nine books, her latest is The Horseman’s Guide to Tack and Equipment.