The time had come to bring the horses home to our small farm in Piedmont, S.C. The barn was ready, the fences were installed, and a brand new arena completed my childhood dream. Months of planning and learning about building safe equine facilities were behind us, and we could rest assured we had done everything to keep our horses happy and healthy for a very long time. Or so we thought. 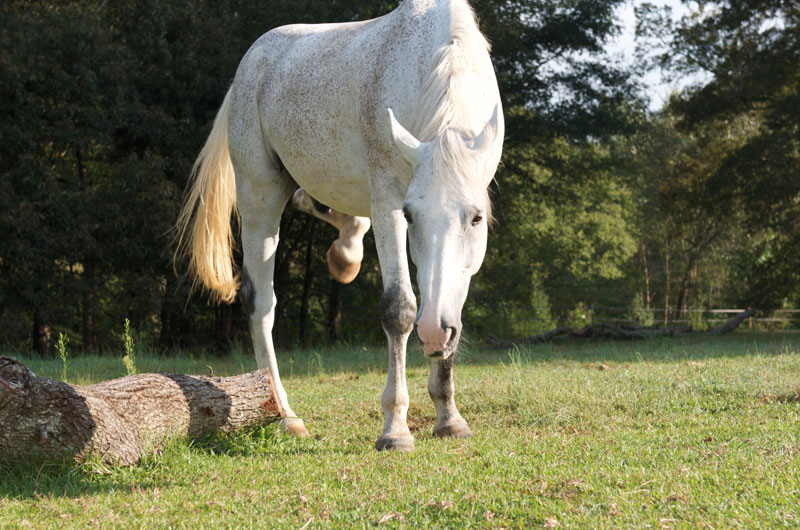 Even though the arena builders had to tear up a significant part of the pasture to make the ring level, they did a fabulous job and assured us the grass would grow back quickly. I limed, fertilized and put down grass seed, and in the spring, the pasture surrounding the ring was green once more.

I was looking forward to the moment our horses would graze in these magnificent pastures. A few weeds had appeared, but after inspecting the flat leaves with the yellow flowers, I believed them to be just dandelions, and thought we had nothing to worry about. If only I had known what was about to happen.

About two months later, I noticed my Dutch Warmblood, Wycasco (“Wik”), seemed a bit stiff. Then he started to refuse to trot in a circle to the right. When I free-longed him, he looked very sore all over his body. I racked my brain for possible causes. EPM (equine protozoal myelitis) crossed my mind, and since some of our pasture is on a hill, I thought he might have run up and down the pastures a bit too hard. I called several vets for consults and sent videos for insight on what it could be, but to no avail.

My local vet came out for a checkup. He didn’t see any abnormalities with Wik’s gait or behavior and couldn’t find anything wrong with him. But I knew something was very wrong. The question was—what? I gave him Adequan, supplements, different saddles, shoes, no shoes, rest, chiropractic treatments, massages—but nothing made a difference. In fact, it got worse.

One morning, I walked in the tack room to get feed. Normally Wik pokes his head in the door to watch me prepare his food. Then he will take a few steps backward to let me pass and follow me into the run-in shed to eat. Not that day. He tried to back up, but got very anxious. It almost looked like he had severe abscesses in his hind feet. I wondered if pain was the cause, thinking perhaps the farrier had been overzealous and trimmed his feet too short. Then he tried to make it over a 4-inch beam to access the run-in shed and stall. It was a horrible sight. He looked like he had no clue where his hind feet were and he got very anxious. The more anxious he got, the harder he tried to make it over the beam. I helped him to get away and fed him outside. I was very worried. What was going on here?

Coincidentally, my neighbor called that afternoon. He asked me if I had heard about Australian stringhalt, and invited me to come look at his mare that had it. I hadn’t heard about it, nor had I heard of any other affected horses in our area, but replied I would be happy to come over.

When I walked into my neighbor’s pasture, I noticed his Thoroughbred mare Phoebe could barely walk. She was unable to back up and her hind legs were moving in the oddest fashion, yanked up high to her belly every time she took a step.

While this was different from Wik’s symptoms, it struck me that both horses had problems with moving and controlling their hind legs. When I asked my neighbor when he first noticed something amiss, he explained how a few weeks ago the mare had just seemed stiff, but then steadily worsened to her current condition. When I returned home, I spent the whole night researching Australian stringhalt and quickly came to believe that this was Wik’s problem.

Early symptoms of stringhalt begin to appear after roughly seven to 21 days of grazing flatweed-dominated pastures. It begins with slight incoordination in one or both of the hind limbs when a horse is initially walked off. As a horse begins to warm up, this improves.

Research has yet to explain why only some but not all horses are affected, and hard keepers like my Dutch Warmblood seem more likely to be affected early. In more severe cases, horses exhibit mild signs when quiet, but develop total incoordination and the goose-stepping gait when excited or agitated, especially by the inability to walk properly. Often horses are unable to back up without severe incoordination. The description fit Wik.

The next morning I went out to inspect our pastures. Most of it looked OK, but when I got to the spot where the new arena was installed, my heart skipped a beat. The area surrounding the ring that I thought was covered with dandelion was in fact riddled with flatweed. The grass had not fully come in yet, and the flatweed had taken that opportunity to spread abundantly. Since the flowers are so similar in appearance, I had not recognized that this was an entirely different weed than dandelion.

The weeds both have similarly shaped leaves, a yellow flower and a bulb of seeds that fly on the wind. However, unlike the soft, smooth leaves of the true dandelion, flatweed is covered with fine hairs.

Removal of horses from the affected pastures is crucial. Most will recover by themselves, but not all. Immediately I moved Wik and my pony to a paddock. I had all the pastures sprayed with weed killer, even though only the spots surrounding the arena seemed affected. I created a pasture improvement plan and limed, sprayed, and fertilized to encourage the grass to grow and replace the weeds. I learned that flatweed spreads during droughts, and that year had been a dry summer.

In the meantime, Wik could barely walk. He yanked both his hind feet up in a spasm all the way to his belly. He could not trot. He could canter in an odd fashion, pushing off with both hind legs at the same time in a bunny hop. The inability to use his body made him very anxious. He spooked at the slightest sound, and I noticed that he never seemed to lie down.

Online research suggested controlled exercise might aid recovery. When Wik improved after a few months, I started hand-walking him in the arena. Using clicker training and treats, I worked on asking him to take small steps back and other simple movements, and eventually turns on the forehand. Slowly he improved.

Finally, after about seven months, his walk had almost returned to normal. He could back up, and he could turn around the haunches and the forehand again. I was thrilled! However, he still could not trot. A friend had heard of another horse that had been treated with Phenytoin (an anticonvulsant drug usually used to treat epilepsy) for Australian stringhalt. We contacted the owner for the details and our local vet ordered the drug for us the same day. The first few days after Wik was on it, he was very sleepy and finally started to lie down to sleep again. On the fifth day, I brought him in the arena for his physical therapy. I was curious to see if I could ask him to try a trot.

When I had asked previously, he would transition into a canter right away. However, that day he offered one single step of trot! I was so relieved.

After 10 minutes, he was able to trot about 20 feet. It was odd and without rhythm, but it was a trot, and I can say we were both surprised and beyond happy. The next week I caught Wik trotting up the hill by himself for 10 steps. After that, he trotted more and more.

Eventually, I caught Wik racing around with his pasturemate Huckleberry, really using his body full-out, so I thought I might try riding again. On a sunny morning, it seemed I fidgeted forever with the saddle before finally mustering up the courage to climb on. We only walked 30 feet from one end of the pasture to the other, but it was sheer heaven to me. I got off and buried my nose deep in his mane. He poked at my pockets for a treat and looked very relaxed and content. I had my friend back!

From the time I first learned about Australian stringhalt, it took Wik a full year to recover. My neighbor’s mare took even longer to get well, but also made a complete recovery.

At our farm the grass has finally replaced the flatweed on the area around our arena, but I still don’t let the horses graze on it and I vigorously patrol the pastures for signs of new flatweed growth. And now, every chance I get, I share my story with other horse owners to help them understand the danger of a simple weed that looks so very innocent, but can cause devastating heartbreak for them and their horses. 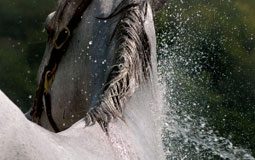