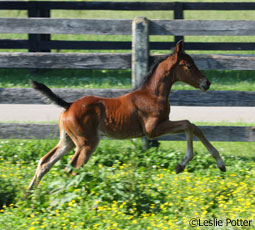 Eleven months have crawled agonizingly by, but the long wait is finally over. You have joyfully witnessed the birth of a beautiful colt at dawn following a sleepless all-night vigil. All appears to be well, and you settle down in the straw to watch the new arrival’s efforts to gain his feet, eagerly waiting to catch a glimpse of him nursing. His efforts to rise are comical, but it’s well past your breakfast time and you’re anxious to see him safely on his feet before you return to the house.

After the trying ordeal of birth and the energy expended struggling to his uncertain feet, the first thing your foal needs is fuel in the form of his first meal. Eagerly, he begins searching everywhere for it. His exploration takes him across his mother’s chest, behind her elbows, around the belly and in her flank, nuzzling and sucking everything. It seems like an eternity before he gleefully discovers his mother’s equine “bottle.” If he’s lucky, he’ll find sweet life-giving milk to reward him for his efforts. But what if after his laborious search, he were rewarded with the equivalent of an empty glass?

Milk-flow failure may not be foremost in your mind as you watch the birth and first moments of your young champion’s life. Most breeders, if they even think of it, are more worried about complications from excessive milk production rather than no milk. But the complete failure of milk flow following foaling, known as agalactia, affects as many as 1,200 to 1,500 mares annually. Although comparatively rare, the outcome can be devastating to your foal.

Agalactia can occur for a number of reasons. Your mare may have a problem actually producing the milk, suffering from a breakdown of the milk production enzyme. The most likely cause of this is a hormonal deficiency from grazing on fungi-infected fescue grass. This depresses the levels of milk-producing hormones thyroxine and prolactin, and may also produce the chemical chanoclavine, which inhibits mammary development. However, the causes of MPF aren’t limited to fescue poisoning. Diseases can also lead to this problem: Acute metritis and mastitis are two of the most common.

Even if adequate milk is being produced, a mare stressed or frightened during or shortly after parturition may have plenty of milk but fail to eject. Milk ejection failure can be caused by release of the “fight or flight” hormone epinephrine, which inhibits the “milk let down” hormone, oxytocin.

The good news is that if your mare only suffers from milk ejection failure, repeated nursing attempts by the foal often will be enough to stimulate milk flow, and if not, an injection of oxytocin and warm compresses to the udder should correct the problem. Unfortunately, however, when agalactia is caused by the failure of the mammary gland to produce milk, treatment often is futile. Injecting thyroid-releasing hormone twice a day for 5 days following foaling has had fairly good results, but if treatment is discontinued before the full 5 days, milk flow will cease. Eighty percent of all mares undergoing this treatment will lactate within 48 to 72 hours of the initial injection, but due to the delay in milk production, the foals won’t receive the colostrum within that critical time needed for antibody protection.

Fortunately, there are other alternatives if milk flow is not initiated within a few short hours of foaling. Milking several ounces of colostrum from another foaling mare or several mares in the same area can be an acceptable substitute. Many breeding farms routinely milk a small amount of colostrum from their mares and freeze it for future emergency use. Your vet may know of such breeders or owners who would be willing to help you out. If you have access to a veterinary hospital of school, they may have also saved colostrum. If you’re unable to obtain any colostrum, your newborn will require serum transfusions and vigilant care.

While there’s no perfect substitute for mother’s milk, foals can survive and even thrive on artificial preparations. Once your foal has received some form of passive immune transfer, your next concern is to supply a diet his immature gut can handle. The presence of the foal and his attempts to nurse will often stimulate milk production in the mare. If not, however, a nursemare is one option — although this may involve complications since it’s important to leave a foal with his dam if they’ve bonded, even though she isn’t providing sustenance.

Of your mare stays dry and a nursemare isn’t available, raw goat’s milk or a commercial milk replacer formulated for foals can be good substitutes. Be prepared to bottle feed these hourly around the clock for the first 10 days. Feedings can be cut back to every 3 to 4 hours by the third week (day 20) with the introduction of solid foods in the form of commercial foal pellets.

Hopefully, your foal will never experience a “dry tap,” and his mother will have plenty of rich milk for the taking. But if not, your prompt awareness of the problem and appropriate action can make the difference between life and death. 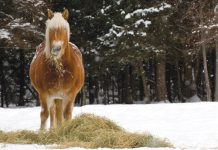 Munching Through the Snow: A Vet Talks Winter Nutrition for Your Horse 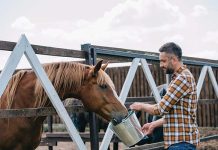