If you own a horse long enough, chances are that at some point he is going to come up lame. Sometimes it’s obvious what is wrong, such as a gash on the hock or a wayward horseshoe nail. Your veterinarian does a quick checkup, makes the diagnosis, prescribes an appropriate treatment and is off to the next appointment.

Other times, the origin of the problem isn’t as obvious, and your veterinarian might insist on doing a complete lameness exam. These consist of asking lots of questions, checking all of the legs instead of just the lame one, and running tests that don’t seem to directly relate to the lameness, including bloodwork and maybe even a dental evaluation. 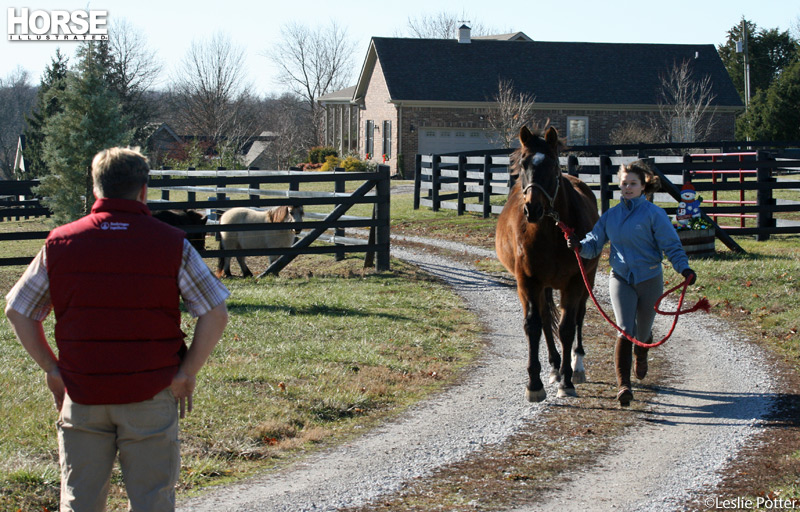 For chronic and less obvious lameness issues, veterinarians need to search for clues that can help identify the source of the problem. Those clues could lie in the horse’s use. Or, they might involve non-orthopedic problems that manifest in pain or lameness or a visible, secondary lameness in a limb that’s the result of a hidden, primary problem elsewhere. The hunt for answers generally includes getting the horse’s history, conducting a physical exam, using hoof testers, performing flexion tests and doing nerve blocks.

Depending on what those tests reveal—or fail to reveal—your veterinarian may also do bloodwork and additional tests.

For stubborn cases that don’t yield answers, your veterinarian might go further and suggest your horse undergo advanced diagnostics at a veterinary clinic.

Here’s a closer look at how veterinarians search for answers in a lameness exam.

“All lameness exams start with obtaining a horse’s history from the owner,” says Daniel B. Slovis, DVM, of Three Oaks Equine ambulatory veterinary practice in Goochland, Va. “This information includes the animal’s age, use, conditioning, and how and when the lameness was first noted.” For example, causes and treatments of common lameness disorders in aging horses are significantly different from those seen in youngsters. The same applies to an out-of-shape horse returning to work versus a fit horse experiencing a sudden lameness.

“Was the lameness noted with or without a rider, while performing small circles, traveling in a certain direction or during a particular gait?” asks Slovis. Answers to these questions could suggest where the lameness originates.

The kind of work the horse has been doing is also important: “Specific limb lamenesses are sometimes associated with specific professions for horses,” says Tia Nelson, DVM, a farrier and owner of Total Dynamic Balance Veterinary Clinic in Helena, Mont.

During the physical exam, the vet will look for detectable physical abnormalities or changes in the horse’s movement and which part of the body seems to be affected.

“We look at the animal’s conformation,” Slovis explains. “Are the feet under the horse? Is the shoe giving enough support to his heels? Are his toes too long and causing a leverage problem that creates strain on joints and tendons, which will lead to strain on the entire spinal column? We like to watch the horse on a longeline or under saddle at a walk, trot and canter, and in a straight line, on a small and large circle, while changing direction, et cetera.”

The veterinarian will pick up and check each foot to look for rocks, cracks, uneven hoof or shoe wear and loose shoes. Hoof testers can determine if the horse has foot pain. If the horse has recently been trimmed or shod, this can leave his feet feeling a little tender; for example, a “hot nail” might be set in a sensitive part of the hoof.

Your vet will also examine and palpate your horse’s muscles and joints, looking for heat, swelling, pain, and reduced range of motion or lesions—not just in the limbs, but everywhere on the horse’s body. “A painful muscle up high in the shoulder or back can result in lameness,” Nelson says.

Even something as seemingly unrelated to lameness as your horse’s mouth will be checked, as pain from sharp points or edges on the teeth can cause a horse to act and move differently.

Although a horse’s history and a physical exam are often enough to identify a problem, sometimes it’s necessary to continue looking further if the vet was unable to confirm the diagnosis or identify the disorder. In those cases, the next steps are to perform a flexion test followed by a nerve or joint block.

In a flexion test, the veterinarian bends various joints in each limb for 60 to 90 seconds; the horse is then trotted off in a straight line on a hard surface so the vet can check his gait for abnormalities. “These tests put strain on a specific joint or region,” explains Slovis. “Any lameness we note is graded on a lameness scale of 1 to 5. After the flexion test identifies a specific area of concern, we then isolate that region by nerve blocks or joint blocks. These blocks numb or anesthetize the nerve or joint causing the most discomfort.” If the isolated area is indeed where the pain originates, the horse immediately shows improvement. 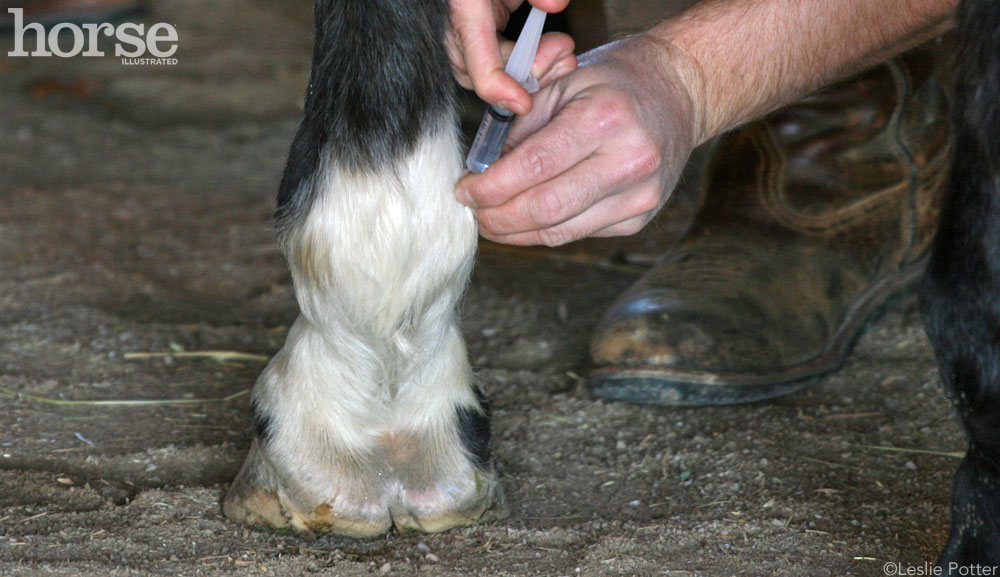 Sometimes, if an area in one foot is blocked, the veterinarian will notice if another limb becomes obviously lame, says Nelson. ”When the most painful foot is blocked, the other foot will manifest its lameness. Your vet may check that foot with hoof testers, flexion tests and/or blocking at that point.”

If the source of lameness still cannot be identified, the veterinarian will perform other tests, looking for both orthopedic and non-orthopedic problems. These diagnostics include radiographs (X-rays) and/or ultrasound of the isolated region in the search for abnormalities. “Radiographs can reveal bone and joint pathology. Ultrasound is used for soft tissue pathology,” says Slovis.

Veterinarians schooled in equine chiropractics may also do an evaluation to check for lameness associated with a subluxation (partial dislocation) of a joint.

Judy notes that neurological disorders are some of the most common problems that are manifested in abnormal gaits and can be confused with orthopedic lameness issues. “Neurological problems may be the result of compression of the spinal cord in the neck [Wobbler’s syndrome] or destruction of nerves from a parasite [such as EPM and Lyme disease]. These types of problems require multiple tests, including bloodwork and spinal fluid analysis.”

Other non-orthopedic tests usually involve taking a horse’s temperature, since an increase suggests infection; bloodwork, which identifies infections and disease; and a complete blood cell count (CBC), which can indicate the presence of inflammation, infections, viruses, anemia, parasites, chronic disease or nutritional deficiencies. “Sometimes, if a horse is sick with some sort of bacterial infection, his bones can ache,” Nelson notes.

Despite the tests conducted by your veterinarian, some disorders still defy identification. At that point, the next step is sending your horse to a referral clinic, which will offer advanced diagnostic techniques (as well as advanced treatments) that are not available in a field setting. Some of those high-tech devices include:

Be aware that a complicated lameness takes time to figure out, and no single diagnostic test will provide answers for every condition. “In most cases, a complicated lameness exam can take several days to perform, and a diagnosis can require the use of many modalities to accurately characterize the full extent of the injury,” says Judy.

Keep in mind that the longer a problem exists, the more difficult it will be to find a resolution. “Early intervention provides the best chance to return the horse to his previous function,” says Adair.

Prompt veterinary attention plus an accurate diagnosis can help save you time, money, stress and worry, and can bring your horse back to health and soundness sooner.

Further Reading
When to Call a Professional
Mystery Lameness