How do horses see the world around them? Learning about how horses view their surroundings helps us better understand equine behavior and in turn makes us better horse people. We asked Paul E. Miller, DVM, Diplomate ACVO, Clinical Professor of Comparative Ophthalmology, Department of Surgical Sciences, School of Veterinary Medicine at the University of Wisconsin-Madison, to answer the most common questions about equine vision. Here’s what he had to say:

1. Horses can be flighty animals prone to spooking. Does the way they “see” the world have anything to do with their proclivity toward spooking?

No. Being “flighty” has to do with being a prey species and not their sight. The average horse has a visual acuity of about 20/30 to 20/40, which is much better than the average dog (20/75) or cat (20/100), but slightly worse than the average human (20/20). In humans, 20/20 means that a person can identify the details of an object from 20 feet away. That standard is applied in animals too, so in horses 20/30 vision means that the horse needs to be 20 feet away from the object to see the same details that the normal person can discern from 30 feet.

2. Generally speaking, horses seem to spook more when they see something unfamiliar in the distance. Does this behavior imply that they can’t see distances very well?

Not really. Horses see at distance relatively well, but not quite as well as humans. The horse’s somewhat lower acuity means that images in the distance are little grainier for him, but not blurry. And unless the distant image is very small, a horse can see it. The horse’s eye is designed to scan the horizon (note the pupil is a horizontal rectangle) and as such potential predators at distance are of particular interest and understandably elicit a heightened state of awareness. It appears that the horse’s overall approach to unidentified objects is to treat them as potentially harmful until proven otherwise.

3. Can horses see close up?

Absolutely. The horse is believed to be able to focus on images that are 50 centimeters (about 10 inches) or farther away. Images closer than this tend to be out of focus, just as images that are very close to our eyes are out of focus (especially as we get older and need reading glasses!). From about 6 feet away the average horse can tell a difference in depth of about 9 centimeters (about 3 1/2 inches) whereas the average person can detect a few millimeters (a couple sheets of paper) difference in depth from the same distance. The ability of the horse to see up close and to discern depth, however, is more than adequate for its lifestyle and its grazing habits.

4. Does a horse’s vision change throughout his lifetime, similar to that of humans?

I assume this is asking about normal horses and not horses that developed cataracts, et cetera. The effect of aging on the horse’s eye has not been very well investigated. The fact that horses do not read or do needlepoint means that even if they did lose some ability to focus on very near objects (as do older humans) it’s not likely to have much of an impact on their lives. Some age-associated human disorders such as small cataracts also appear in horses with age, but since most horses do not perform activities that require precise vision these disorders have relatively little effect on their lifestyle.

5. Humans can’t see directly behind them. Do horses have blind spots too?

Horses have a very large panoramic field of view. With one eye they can see approximately 190-195 degrees horizontally (e.g. from side to side–the horizon) and about 178 degrees vertically (e.g. from top to bottom or “grass to sky”). Using both eyes horses see virtually 350 degrees and the horse almost has a complete “sphere of vision” around its body with only a few small “blind spots.” These blind spots are: 1) located between the two eyes in the region of the forehead (much like the area that would be occupied by a unicorn’s “horn”); 2) directly below its nose; and 3) the width of the animal’s head directly behind it. Clearly, the horse’s large field of view makes it difficult for any potential predator to “sneak up” on it. The horse also has an area where the field of view of the two eyes overlaps, allowing both eyes to see the same object at the same time (binocular vision). This area, which is about 55 to 80 degrees wide, is directly in front of the horse and significantly improves the horse’s ability to detect depth in this area. It should be noted that the area of overlapping vision between the two eyes is much larger than a dog’s or wolf’s (30 to 60 degrees) but less than that of a cat (around 140 degrees) or human (around 170 degrees).

6. Do we know whether horses see color?

Yes. Unlike humans, which have three different types of retinal cells (blue, green and red cone photoreceptors) to detect color, horses have only two (a blue cone photoreceptor and a second photoreceptor that is most sensitive to light and is roughly between that of the human red and green cone). The horse also has fewer numbers of color detecting photoreceptors than do humans, and they are arranged differently in the retina than are human cone photoreceptors. Humans with normal color vision typically see four basic unique hues–blue, green, yellow and red–and about 100 intermediate colors that can be thought of as varying blends of pairs of the four unique colors (for example yellow-green, reddish-yellow/orange, reddish-blue/violet) and so forth). The most dramatic impact of having two cone types instead of three is that horses (and some “color-blind” humans) have only two unique hues, believed to be something similar to blue and yellow, and there are no intermediate hues. When colors at the far ends of the spectrum of visible light are mixed, the result is either a white/gray (this occurs in the blue-green range of the color spectrum), or a desaturated version of one of the two basic hues (e.g. a pastel yellow or a pastel blue). In a sense, horses are orange-blue “color-blind” in that although they can see objects with these colors, they cannot differentiate between orange and blue solely on the basis of color since they both appear to be gray-white to the horse. The fact that horses also have many fewer cones in the central retina than humans do also suggests that their perception of color may not be as vivid as that of humans and that colors appear as washed-out pastels or sepia. Nevertheless, this serves the horse’s purpose.

7. Can horses see at night?

Yes, they have a number of adaptations that allow them to visually outperform humans in dim light. For example, they have a large pupil that is arranged as a rectangular slit, they have a reflective tapetum that further improves vision in dim light by acting as an internal light reflector (causing their eyes to “glow” at night if the light is just right), and they have more rod photoreceptors that work in dim light. Humans have developed the ability to see color at the expense of their abilities to see well in dim light. Instead of developing to identify ripe, yellow fruit hanging from a green tree (like humans have), horses have evolved to function under a much greater range of lighting conditions (perhaps five times larger than humans) and to afford a more panoramic view so as to avoid predators. Because the horse’s food is essentially immobile and not particularly challenging to capture, much of its visual abilities are dedicated to ensure the animal’s survival by being “defensive” in nature. Since many predators have evolved coat colors that closely match the background in terms of color, and in some cases texture, color may be a relatively poor way for the horse to “break the camouflage” of the wolf and it can better see the wolf by having better visual acuity, depth perception, ability to function in dim light, and a wider field of view.

Liked this article? Here are others you’ll enjoy:Is it Safe to Ride a Blind HorseWatch for Eye Problems in Senior HorsesCaring for a Blind Horse

Avoid Vet Day Blues: Strategies to Help Your Horse Work With a Veterinarian 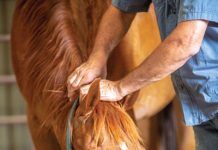 Stretch Your Horse For Better Health