If equine body workers like Wendy Coren get their wishes, a map of fascia meridians throughout the horse’s body will be developed soon. And when it does, it might mean big possibilities for using kinesiology tape to train new movement patterns quickly. Until then, therapists continue to use trial and error for the applications of the lightweight and flexible tape to the horse’s skin, often with compelling results. 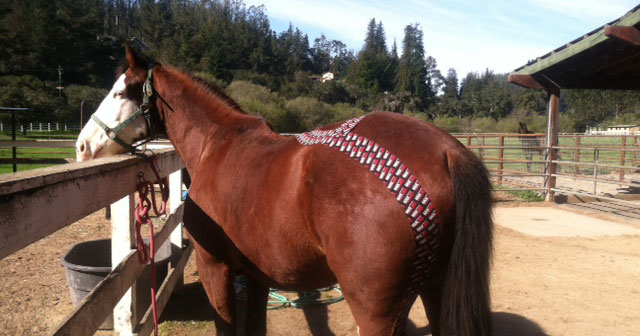 Introduced to the horse world from human competitive sports over five years ago, kinesiology tape has steadily gained credibility among competitors, racetracks, and rehab facilities. Last year, five-time Olympian equestrian Anne Kursinski featured an educational post about the benefits of the tape on her online Riding and Jumping Mentor program. Top riders like jumping star Ian Miller rely on taping to prepare for, and recover from, competitions.

Proponents of the tape believe it works by gently lifting the skin and nerve receptors to increase tissue circulation. Physical therapists use it to treat inflammation and pain. Therapists like Coren believe its usefulness extends to creating new movement patterns. Through its sensory input to the body’s fascia beneath the skin—the sheath of connective tissue that binds and weaves through muscles and organs—kinesiology tape can stimulate particular muscle chain recruitment.

Directly signaling fascia like this can change a horse’s posture or gait immediately.

“If it’s going to work, it works right away. I find it ridiculously effective,” said Coren. When correctly placed, the tape, which comes in various widths, sends delicate stimulation along meridians that can either unblock restricted movements or recruit new ones.

Large-scale equine studies to prove this effect have so far been sparse, but some research has come from human athletics that indicate it might exist. In a 2008 study at China Medical University, fifteen women with knee pain were studied ascending and descending stairs while wearing kinesiology tape around the joint. All of the subjects measured decreased impact force when descending the stairs and a new muscle activation patterns for their quadriceps muscles. A similar study a few years earlier, which included some subjects wearing placebo taping, showed the same results of quadriceps activation among kinesiology tape wearers.

“On a global scale, the benefits of kinesiology taping in equine training and rehabilitation is changing how the equestrian community views this up and coming modality, and it is quickly becoming mainstream”, said James Ruder of Equi-Tape, a company that sells kinesiology tape and offers courses for its use. 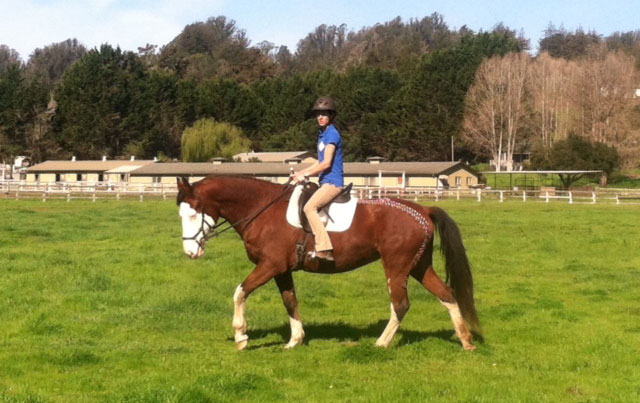 Even among human sports, though, the tape has its doubters. In 2014 the Australian Physiotherapy Journal published its findings from numerous randomized trials involving nearly 500 people that indicated kinesiology tape showed only minimal effectiveness in treating musculoskeletal issues. A 2012 paper in the journal Sports Medicine examined ten separate studies and concluded that kinesiology tape did create measurable muscle activation through taping, but only inconsistent results for range of motion gains and pain relief.

Today many vets have measured dramatic—and immediate—results from taping horses with movement dysfunction. Other times no visible change occurs. The exact placement of tape on the horse’s body might explain these varying successes. Researchers and equine therapists are still working to figure out the location and direction of the horse’s entire network of fascia lines, which would allow for more accurate taping procedures. At last year’s International Fascia Conference for humans, European researchers presented a partial map of muscle and fascia chains known so far in horses.

Even while it remains a work in progress, numerous vets and body workers, consider the tape highly beneficial, especially because it allows them to treat areas experimentally in a non-toxic, non-invasive way. Practitioners and laypeople alike can experiment without any negative consequences to the horse.