Sooner or later, it’s bound to happen to any horse owner: walking in from the pasture or trotting around the ring, your horse appears “off.” You may not be able to tell exactly what’s wrong, but you know his movement is definitely not right; his normally smooth symmetry looks unbalanced. Certainly, not every lameness is created equal and having four legs to choose from when trying to locate the problem can seemingly make the issue four times as complicated. Here are some tips to help you pinpoint the location of your horse’s mystery lameness.

The first rule of a basic lameness exam is 90% of all equine lameness is in the foot. But, which foot? Dividing the horse into front and rear halves helps simplify things, as a front-end lameness usually appears differently than a rear leg lameness. However, let’s begin by learning how to properly set up a horse to evaluate his gait.

Although lameness can be evaluated in a round pen if you don’t have anyone around to help you, ideally, the horse should be trotted in a straight line on a flat, smooth, hard surface by someone else while you observe the horse. Have your helper keep a loose lead rope while she’s trotting alongside the horse. The trot is the most common gait at which to evaluate lameness unless of course the lameness is severe enough to be evident at the walk or the horse is non-weight bearing on a limb.

Now let’s learn about identifying a front leg lameness. A horse that is lame on a front leg will have what is called a “head bob.” Although a horse has a natural head movement at the trot, this up and down movement will become exaggerated when a front leg hurts. Just as you shift weight to the right if your left foot hurts, a horse will lift his head when a lame front leg hits the ground. This requires you to watch head movement and match it with corresponding foot falls. For example, if the head goes up when the left front leg hits the ground, you’ve found a left front lameness.

When horse owners are first starting to learn how to look for lameness, they will sometimes hear people call out the head movements: up, down, up, down. This can help you start to see a pattern and then match footfalls to the beat. The best place to see a head bob is when you are watching the horse trot from the side.

What if a hind limb is lame? A hind limb lameness most commonly presents as a “hip hike,” sometimes also called a gluteal rise. To identify a hip hike, watch the horse’s croup, which is the highest point of the horse’s rump. The croup should stay mostly level during a normal trot, but if a hind limb is sore, the horse will hold up his hip when the lame hind limb hits the ground.

This movement is most easily seen at the level of the croup. Therefore, if a lame left hind leg hits the ground, this is when the croup will be held high. It will then lower back down to normal when the right limb hits the ground. A hip hike is most easily visualized when you are standing directly behind the horse and he is trotted away from you.

Locating lameness takes a lot of practice, especially when a lameness is subtle. Here are some tips:

Once you establish what leg the horse is lame on, further examination may help pinpoint where on that leg the problem is. Remembering the rule about lameness in the foot, some horse owners will use hoof testers to determine where the hoof hurts. Watch your veterinarian or farrier the next time they use this tool and ask about it if you are interested in learning how to use it.

Palpating the limb for heat or swelling can also help hone down the location of the pain. Before starting any treatment, consult your veterinarian. Further diagnostics may be necessary to properly diagnose what’s wrong.

Although locating the lameness is extremely important, describing its severity is also imperative. Fortunately, the American Association of Equine Practitioners (AAEP) has developed a standardized lameness scale to assign a number to a lameness depending on its severity:


2 = lameness is difficult to observe but consistent under certain circumstances


3 = lameness is consistently observable at the trot under all circumstances


4 = lameness is obvious at the walk

This scale allows you to accurately describe the lameness to others as well as provide some sort of measure with which to evaluate changes, such as day-to-day improvement.

Watching your horse as he normally moves will help you more easily identify when something is not right. With some practice and a little patience, the location of a mystery lameness may unravel right before your eyes. 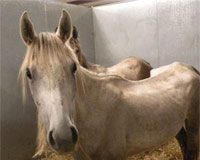 Dozens of Neglected Arabian Horses Will Be Auctioned in Texas this...