Research published in 2005 revealed the presence of ulcers in the colons of performance horses. According to the study, conducted by Frank Pellegrini, DVM, 63 percent of horses involved in competition sports, ranging from dressage to racing, suffered from colonic ulceration.

Pellegrini’s work confirmed the findings of earlier studies, showing that 87 percent of horses have gastric ulcers (ulcers of the stomach). When combined with his findings on the lesser-understood issue of colonic ulcers, however, his study demonstrated two startling facts. He found that 54 percent of performance horses suffered from both gastric and colonic ulcers. Further, Pellegrini’s study showed that 97 percent of performance horses had some type of ulceration.

“This research suggests that ulceration in the colon may be to blame for the low grade anemia, colic and other conditions seen frequently in high performance horses,” Pellegrini says. “Most importantly, it brings into focus the need for further research on the direct causes of colonic ulcers and how exactly they affect the horse.”

Pellegrini’s research proves that colonic ulcers exist prevalently within the performance horse population. Unfortunately, no treatment now available can cure them. Omeprazole, used for gastric ulcers, was formulated for the specific conditions found inside the stomach and will not positively affect the delicate colonic environment.

“Given that more than 60 percent of all performance horses may be suffering from colonic ulceration, which cannot be treated with traditional ulcer medications, it may be time for equine caregivers to consider other options,” Pellegrini says. “A dietary supplement intended to maintain optimum digestive tract health may be the best solution to preventing colonic ulcers before they negatively affect performance and attitude in the horse.”

One approach to promoting overall digestive tract health involves the use of non-testable, natural foodstuffs to heal the intestinal tract and support good health throughout this critical system. Among the ingredients of such a diet is the sort of natural fiber found in oats and barley. To be certain, more information on a natural approach to preventing ulcers in performance horses is on the horizon.

Spring Conditioning: Get Your Horse Fit 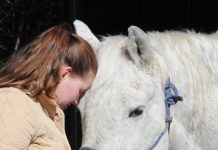 Strangles in Horses: Fact vs. Fiction 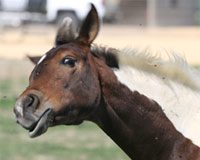 Question of the Week: Sensitivity to Gnats