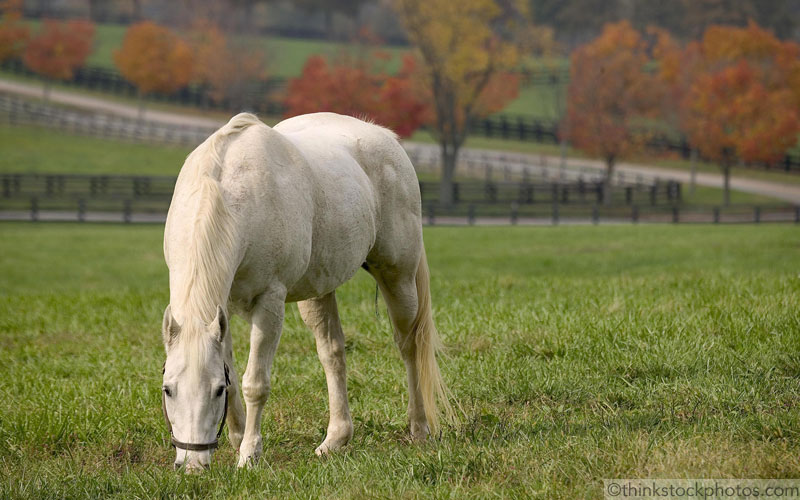 Tapeworms were once considered a fairly benign parasite, unassociated with serious problems in equines. But recent studies show tapeworms are anything but harmless. Consider the statistics:

Why didn’t we know about this before?

“Tapeworms are intestinal parasites that infect horses, as well as other species, throughout the world,” explains Brady J. Bergin, DVM, assistant professor, Oregon State University. “They belong to the class of parasites known as cestodes. The three types of tapeworms that can infect horses are Anoplocephala perfoliata, Anoplocephala magna and Paranoplocephala mamillana, with A. perfoliata being by far the most common.”

Unlike other worms, horse tapeworms need an intermediate host to complete their life cycles. That host, the forage mite, becomes infective by ingesting tapeworm eggs; the horse swallows the infective mites while grazing, and the tapeworms mature in the horse’s intestine within six to 10 weeks.

Although much is unknown about the mite’s biology, they’re widespread, living in pastures, lawns and vegetation, says Craig R. Reinemeyer, DVM, Ph.D., immediate past president of the American Association of Veterinary Parasitologists, and president of East Tennessee Clinical Research Inc., the research group that identified tapeworm prevalence in the United States. The mite also seems to favor temperate climates.

“They live in the humus, the organic layer of the soil,” says Robert H. Dressler, DVM, manager of Equine Veterinary Operations at Pfizer Animal Health. “In the arid desert areas of the Southwest, there isn’t a whole lot of humus, and that’s where there is a much lower incidence of tapeworms.”

Bottom line: Any horse that grazes on pasture is at risk for ingesting infected mites.

Although studies now demonstrate that tapeworms are everywhere in the United States (albeit in varying numbers), experts had been unaware of their prevalence because of the inability to accurately diagnose tapeworm infection in the horse.

“Traditionally, we looked for tapeworm eggs in fecal exams, but that’s been very ineffective,” Dr. Reinemeyer says. “With most other parasites in horses the females stay in the gut and pass out eggs, and the eggs leave the horse in the manure. With tapeworms, the eggs develop in a lower segment of the worm’s body, which separates and passes out in the fecal matter into the environment, but it’s not an ongoing process. The tapeworm body is like a freight train with a bunch of boxcars, one chained to the other. The end of the tapeworm matures faster than the rest of it, so every once in a while the caboose (which is like a bag of eggs) drops off. That bag may not rupture until it gets outside the horse or gets farther down the track, we don’t know.”

Further, although tapeworms were detected during surgery or postmortem, they weren’t associated with any disease process.

That all changed in the mid-1990s when a British researcher developed a test that could detect an immune response to a specific protein exuded by tapeworms into the horse’s blood. Although this test only determines exposure to tapeworms as opposed to an active infection (much like horses that have been exposed to equine protozoal myeloencephalitis, or EPM, don’t necessarily have the active disease), it was a step in the right direction and enabled researchers to discover just how widespread tapeworms are.

Since then, researchers learned that tapeworms cause degrees of intestinal damage and disease. Dr. Bergin says, “This damage occurs when large numbers of tapeworms firmly attach to certain areas of the digestive tract, such as the small intestine or, more specifically, the ileocecal junction (the common opening of the ileum, colon and cecum). Their attachment can lead to inflammation, irritation and ulceration at this site, impairing normal function. This intestinal malfunction can also adversely affect the digestive tract, leading to three common types of colic associated with tapeworm infestation: ileocecal intussusception, ileocecal impaction and spasmodic colic.”

Even though prevention of tapeworms isn’t truly possible, you can successfully treat these parasites in a horse and prevent the onset of colic and other complications that may be related to tapeworm infection, notes Tom Kennedy, Ph.D., vice president of research and development, Farnam Companies Inc.

In the past, equine tapeworms were controlled with double or triple doses of pyrantel pamoate. “That did a fairly good job but was not 100 percent effective,” says Kevin Hankins, DVM, field veterinary consultant for Fort Dodge Animal Health. “It was costly plus it was sometimes a nightmare to get two or three tubes of dewormer into a horse.”

But the recent development of praziquantel in paste and gel formulations for horses offers an affordable, easier, and, to date, more effective alternative. “Praziquantel has been around for a long time, and has been used extensively in dogs and cats,” Dr. Hankins states. “It kills the tapeworms in the horse by destroying the worm’s protective, tough outer layer, thus making the parasite vulnerable to the horse’s immune system, which takes care of it from there.”

Explains Frank Hurtig, DVM, manager, Veterinary Professional Services at Merial Inc., “The addition of praziquantel to horse parasite control medicines containing macrocyclic lactone drugs (i.e. moxidectin and ivermectin) has been an advance in treatment and control of tapeworms in horses. Praziquantel has a wide margin of safety in horses.” Thus with one dose, praziquantel/macrocyclic lactone formulations offer treatment of tapeworms as well as broad-spectrum activity against strongyles, ascarids, pinworms, bots and other common horse parasites.

The only precaution is treating a horse infected with a lot of parasites or one that is clinically ill, Dr. Hankins says. “If they have a very high parasite load, you could end up causing an impaction from all of the parasites killed off in the gut. Also, when parasites die off, they can produce a toxin, and that can make your horse sick. If your horse is already ill or heavily parasitized, his immune system is likely suppressed and would react differently to a normal deworming schedule; that is why dewormers are labeled as only for use in healthy animals.”

Some veterinarians treat at-risk horses by either administering a reduced dose and/or administering mineral oil 24 hours prior to deworming to help with the passage of the dead parasites.

Currently, praziquantel is labeled only for treatment, not prevention. But Dr. Hurtig notes, “Since tapeworms are extremely difficult to definitively diagnose in the live horse, it is best to simply treat for tapeworms on a frequent basis.” This will benefit horses, since using praziquantel products routinely at labeled dosage recommendations removes tapeworms before they become a problem instead of after a problem (i.e. colic) is apparent.

Work with your veterinarian to develop a program that’s specific for your horse and climate. Dr. Bergin says that there is not a single catch-all recipe for controlling parasites that works for every horse in every area—it’s based on a number of factors that need to be evaluated, and from there your veterinarian can create a plan.

Although praziquantel is safe, don’t overuse it as parasites likely will build resistance to it. Dr. Reinemeyer explains, “Frequent use of dewormers puts tremendous pressure on the parasites to adapt to survive this continuous onslaught, so they select for resistance. We’re seeing that now with ascarids and ivermectin.”

To reduce the spread of parasites, remove manure from stalls daily, dispose of fecal material away from pastures and feed/water supplies, and chain drag or harrow pastures to break up manure piles. Don’t feed your horses directly on the ground; this increases the risk of ingesting forage mites since it is where they typically reside. Avoid overcrowding or overgrazing pastures (rotate if possible). Finally, quarantine all new additions to the herd and perform fecal exams to determine parasite status in general and to avoid the introduction of parasites.

While differentiating between tapeworm exposure and an active infection is still a guessing game, researchers hope to soon change that. Stephen Kania, Ph.D., associate professor, University of Tennessee College of Veterinary Medicine, has developed a test, with the support of the American Quarter Horse Association, that detects proteins released by the tapeworm parasite into fecal material. “This test differs from antibody detection in that a positive result is likely to indicate an active parasite infection,” Dr. Kania says. “We are currently at the stage of validating the test with samples from a large number of horses.” If all goes well, it’s possible this diagnostic test will be available in two or three years and could be a great aid in advancing knowledge on tapeworm infection.

Fortunately, you have the tools now to avoid tapeworm problems in your horse. Discuss the risks of infection in your area with your veterinarian and work out a responsible deworming program appropriate for your horse.