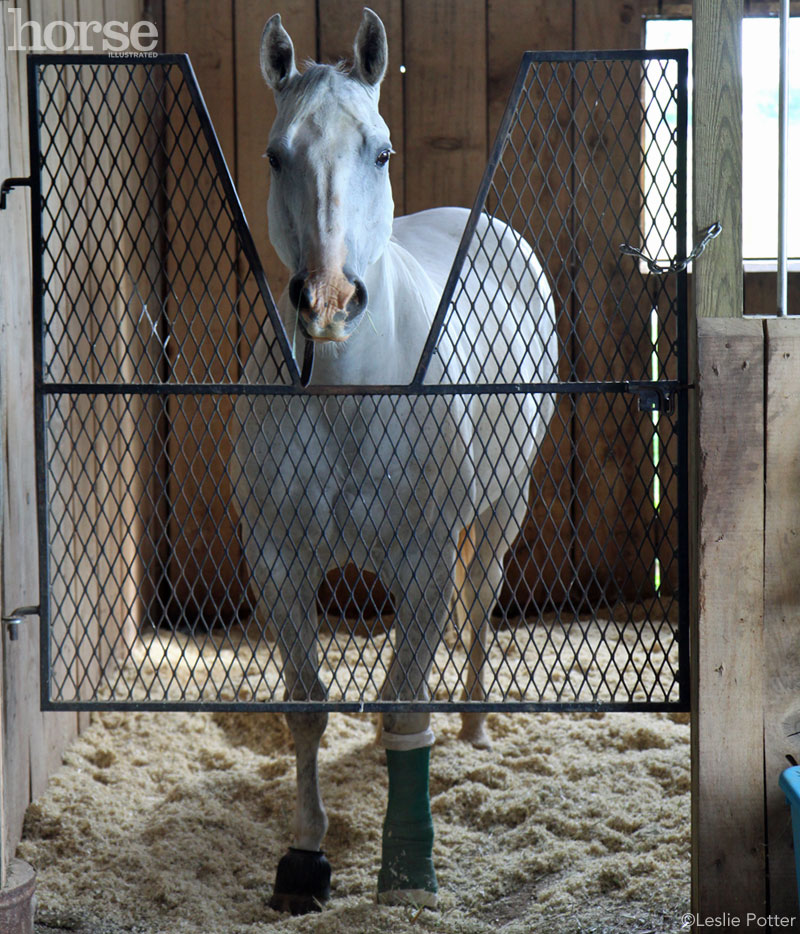 After his long winter off, you’ve put your horse through a springtime conditioning regimen, and he’s ready for competitions, weekend camping trips or plenty of pleasure riding on the local trails. You’ve been slowly putting him through his paces, and all is well except an unusual swelling on one of his forelegs that popped up after a romp in the pasture with his buddies. Your one-two punch of icing, bute and standing wraps is helping, but he’s off. So you call out the vet—and get the bad news. Your horse has a tendon injury, and you won’t be doing much riding this summer.

Every breed and riding discipline has its own set of tendon and ligament injuries, but across the board there are four major structures in the forelimbs that are most commonly injured. Here’s a look at those injuries and the prognosis for each, which in many cases is quite good thanks to veterinary advancements.

Anatomy and Physiology of Tendons and Ligaments

Tendons and ligaments are made from the same basic tissue and have the same basic structure. The tissue is a very strong fibrous material that groups together in bundles, forming long cords.

Ligaments join bone to bone. They are stabilizing structures that essentially hold bones together and stop them from overextending, overflexing or overrotating.

There are four main tendons and ligaments at the back of the horse’s leg that do the majority of the work: suspensory ligament, inferior check ligament, deep digital flexor tendon and the superficial digital flexor tendon. In a horse’s forelegs, these four structures are the most commonly injured tendons and ligaments. When injury does occur in these structures, the infamous “bowing out” along the back of the leg is visible—in layman’s terms, the horse has a bow.

Medically speaking, a bow can be different “types” of injuries involving tendons and ligaments: Strains that cause tendons and ligaments to stretch are described as type I lesions. They result in swelling of the tendon or ligament. Depending on the location and amount of swelling, the horse’s leg is usually only slightly enlarged, warm and painful, and lameness may or may not be present.

The superficial digital flexor tendon is responsible for stability and flexion of the lower leg. When this tendon is injured, there is generally some lameness, but even severe damage may not be career ending.

The deep digital flexor tendon is a workhorse of a tendon: It not only stabilizes the leg during maximum load (full weight bearing), but also flexes all of the lower leg joints during hoof flight. If it’s significantly damaged, there is lameness, heat, pain and swelling, and it could be career ending.

Suspensory ligament in-juries are the most serious and can be the hardest to treat. Like the deep digital flexor tendon, an injury here causes lameness and swelling. The job of this ligament is to stabilize the leg during maximum load; it stops the fetlock from dropping to the ground.

With all of these structures, one thing is certain: The more severe the injury, the more lameness there is. 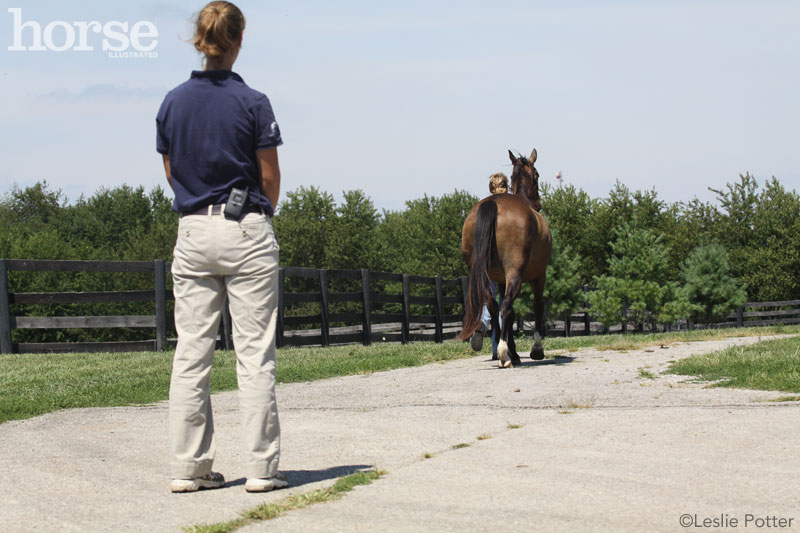 Depending on the tendon or ligament affected, and the type of injury that has occurred, a horse can have varying degrees of lameness, from mild to severe.

Signs of Trouble
Being familiar with what is normal in your horse’s legs, along with his normal way of going, will help you know when something isn’t right. The more severe or recent the injury, the more heat, pain and swelling that occur. Sometimes there is an enlargement in the area without lameness or obvious pain. When these enlargements occur though, it is still cause for concern. A veterinarian can palpate (feel) the leg and tell which tendon or ligament is involved, but a confirmed diagnosis comes from ultrasounding the affected area.

Ultrasound is the most basic and useful tool to evaluate these soft tissue injuries. From these images we can see which structure is damaged, the extent of damage, the location, and we can measure the damage. MRI is also used to diagnose soft tissue injury, as well as scintigraphy (scan).

In the old days many horses were simply “turned out” for six months to heal a tendon/ligament injury and then rechecked. Certainly our minds have changed in this area over the last five years. If your horse is unlucky enough to get one of these injuries, today there are many options to help him recover.

The current thinking is to decrease inflammation and rest the horse to prevent any further damage. Icing and cold hosing are very effective for reducing inflammation within the first 48 to 72 hours after injury. The leg is wrapped for support and may be poulticed in an effort to decrease the inflammation further. I often use a gelcast, which is a special bandage that has magnesium salts in it that act like a poultice. It is combined with four other layers of wrapping and looks like a soft cast. It supports the fetlock and minimizes the pull on the back of tendons and ligaments, essentially resting the damaged area.

Anti-inflammatory drugs can be useful to keep pain and swelling down. If the injury is mild enough that it can be managed without these medications, sometimes the pain keeps the horse off the leg, which allows for rest and healing.

Depending on the severity of damage, the horse is usually stall rested for a length of time, then hand walked, and then put back to modified work until the area is healed. This process can be very subjective and variable depending on the horse, owner, environment and veterinarian. The current theory and practice is to start the horse back to modified work earlier in an effort to strengthen the tissues and help them realign as close as possible back to their original fiber pattern. However, under-saddle work is typically limited to a walk only within the first few months of injury.

Treatment Advances
Aside from rest, we now have many new treatments that are clinically proven to help tendons and ligaments heal stronger and get horses back to their performance lives. For some horses this means returning back to the level of previous workload, while others may need to step down to less demanding careers.

Extracorporeal shock wave therapy (ESWT) has become a very valid therapy for these types of injuries with a good deal of success. At this time it is unknown exactly how ESWT works, but it is thought that it increases blood flow, stimulates healing and possibly numbs pain.

Another treatment proven to be successful is bone marrow transplant. Bone marrow from the horse’s sternum is extracted and then transplanted into the area of damage. Here again, the full mechanism of how this works is unknown, but it is believed that within the bone marrow are chemical and cell mediators that stimulate healing, including stem cells.

This leads us into another area of exciting treatment options: stem cell therapy. It is now possible to extract stem cells from a horse’s own fat, and then use those cells for healing. Stem cells are those that haven’t differentiated into any specific type ofcell yet: They still have the potential to become skin, bone, tendon, ligament, et cetera. It’s an exciting concept because it means these cells can be placed in damaged tissue, allowing the tissue to then  regenerate.

Another therapy is IRAP (interleukin-1 receptor antagonist protein). IRAP is a chemical mediator in the blood that stops the bad chemical mediators in the blood produced by inflammation from being able to do damage, and allows the good chemical mediators to work more effectively. Blood from the horse is taken and incubated on special glass beads which grow the IRAP. The IRAP is then harvested and injected into the injury site. Unfortunately, this therapy is not widely available yet, but that may change.

With the exception of stem cell therapy from fat, I have personally used all of these therapies on tendon and ligament injuries and have seen great success to the point of horses returning to their former level of competition or life. They are all exciting wonderful treatments that have opened the door for many horses and owners.

Our ability to diagnose, treat and prevent tendon/ligament injuries has improved tremendously over the last few years. Although these injuries are still extremely serious, they’re not as overwhelming as they once were. With good care and treatment, many tendon and ligament injuries can now be overcome.