It may seem strange that a horse can essentially live in a field full of salad and yet maintain good weight on a 1,000-plus-pound frame. How is that possible? Humans are much smaller but need higher concentrations of protein and fat, in addition to vegetables, to stay healthy.

The reason for this is a difference in digestive systems. Omnivores (plant and meat eaters) and carnivores (meat-only eaters) absorb most of their nutrients straight from their food in the small intestine, which accounts for two-thirds of their digestive tract. Fiber, the indigestible portion of plants, is not a significant source of nutrients for humans, although it has many other important health benefits. 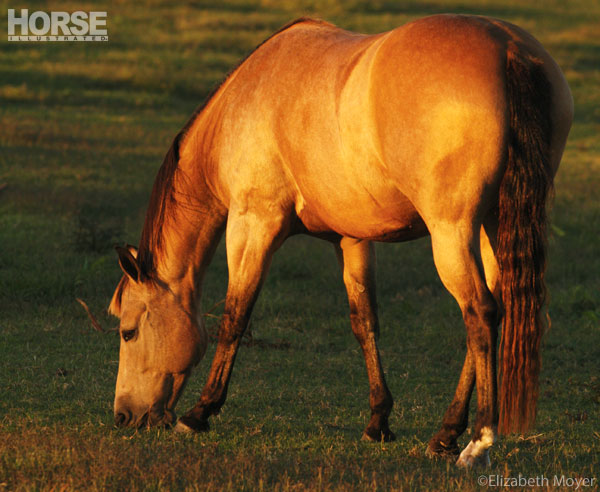 As herbivores (animals that eat only plants), horses must find another way to get nutrients out of a food source that has much less direct caloric value. The secret is microbes: tiny bacteria, protozoa and fungi that break down, or ferment, the plant fiber into an energy form the animal can absorb. In return, the animal provides both the plant matter and a protected place the microbes need in order to survive.

For an herbivore to benefit from a significant amount of fermentation, the microbes need to be housed in a high-volume digestive tract. While humans do experience a small amount of microbial fermentation in the large intestine, it is much less than that of herbivorous animals.

Ruminants, such as sheep and cattle, have a four-compartment stomach containing a large population of microorganisms that allow fiber fermentation to occur prior to the small intestine. The stomach of a cow accounts for over 70 percent of its digestive tract volume.

In nonruminant herbivores—such as horses, rabbits and elephants—microbial fermentation happens after the small intestine in the hindgut (cecum and large colon). A horse’s hindgut accounts for about 70 percent of his total digestive tract capacity.

The Horse’s Digestive System
The first step of digestion is the grinding of food particles by the horse’s molar teeth, mixing the food with saliva before it proceeds down the esophagus to the stomach.

» Stomach
A horse’s stomach is small compared to his body size, holding only 2 to 4 gallons.

“Horses produce stomach acid 24/7 and not just in response to a meal,” says Lydia Gray, DVM, medical director and staff veterinarian for SmartPak Equine. “Horses have the smallest stomach capacity relative to the rest of their digestive tract of all domestic animals, such as cows, pigs and dogs. In practical terms, this means that horses are not designed to eat large meals and then rest and digest. Instead, horses are meant to nibble nearly all day long.” Food in the horse’s stomach is barraged with acid and enzymes for about 20 minutes before moving along to the small intestine.

» Small Intestine
In the 70-foot-long small intestine, simple carbohydrates (sugar and starch), protein, fats, vitamins and minerals are absorbed. From there, any remaining undigested particles and fluids proceed to the hindgut.

» Hindgut (Cecum and Large Colon)
The cecum is a 3- to 4-foot-long “dead end” pouch at the start of the colon that can hold up to 30 liters of fluid. The large colon is 10 to 12 feet long with a whopping 100-liter capacity; it’s an important fluid reservoir that the horse draws from during prolonged exercise.

The hindgut’s fermentation process generates a form of energy that the horse can absorb, providing 30 to 70 percent of the total dietary energy, depending on the feed source.

“The extra calories produced in the fermentation process also help keep the body warm,” says Gray. “That’s why extra hay is recommended for those cold days in winter.”

» Small Colon and Rectum
The small colon is about the same length as the large colon, but it’s much smaller in diameter. The small colon and rectum are where 90 percent of the water from the digestive contents is absorbed.

The Importance of Fiber
It’s good to be aware of the fermentation process when feeding your horse because you are “feeding” the microbes too. Horses in the wild graze on small amounts of fibrous grasses all day, which is rarely how we feed them in captivity.

Horses should eat at least 2 percent of their body weight in forage (hay or pasture) per day in order to meet their roughage requirement. This equates to 20 pounds of hay for a 1,000-pound horse. Grains/concentrates should always account for less than 50 percent of the diet by weight, but some horses don’t require any grain at all if they are not in hard work and get a vitamin/mineral supplement. 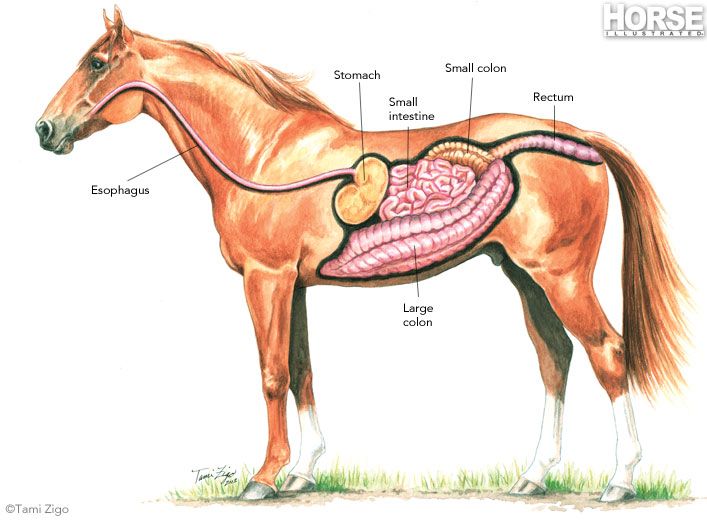 Problem areas
Trouble can arise at many points along the equine digestive system. The following is a breakdown of some of the most common issues.

» Stomach Ulcers
You’ve probably heard the alarming statistic that up to 90 percent of horses in a regular training program have ulcers. This shouldn’t be surprising when you consider that lots of grain paired with insufficient forage is one of the major causes of equine ulcers. Additionally, the longer a horse fasts between meals, the higher the levels of stomach acid become, increasing the risk of developing ulcers.

“Other risk factors include intense exercise, stress, transportation, injury or illness, and long-term or high dosages of nonsteroidal anti-inflammatory (NSAID) drugs, such as phenylbutazone,” says Gray.

Symptoms of ulcers can be subtle, such as a rough coat, poor performance, grinding of the teeth, slight colic symptoms and lack of appetite. An endoscopy performed by your veterinarian is the only way to diagnose ulcers and their severity with certainty. GastroGard (omeprazole paste) is the only FDA-approved product used to treat gastric ulcers in horses.

Since prevention is always the best medicine, try to provide your horse with frequent hay meals. Chewing on forage produces large amounts of saliva, a natural buffer against stomach acid. Alfalfa is thought to have an extra buffering effect due to its high calcium content (think of Tums for horses), but it’s also higher in calories, which can be a problem for overweight horses. Best of all is 24/7 pasture grazing, but that is not possible for every horse owner’s situation.

» Colic
“Colic is a catch-all term for pain in the abdomen that can be caused by a myriad of conditions, many of which are never diagnosed,” says Gray. Some of the more common causes may include impaction, gas and intestinal twists.

Impaction is often caused by dehydration, which dries out the food moving through the intestines and makes it easier for the food to get stuck. There are three particularly narrow areas in the horse’s large colon where feed can get stuck if it’s too solid. To help prevent this, make sure your horse has plenty of clean water at all times.

Gas colic can be caused by sudden changes in the diet or overfeeding of starchy grains, both of which can throw the microbe population out of balance.

“Hay changes can increase a horse’s chances of colic tenfold, while grain changes can increase chances by fivefold,” says Gray.
Keep your horse on the same feeding routine as much as possible. If you need to change hay or grain, start with a 75/25 ratio of old to new, gradually switching to 50/50 and 25/75 before changing over completely after 10 days or so.

Sand colic is a problem in regions with sandy soil. It’s best to take preventive measures by not feeding horses from the ground, and by providing a psyllium supplement for one week each month to move the sand out of your horse’s gut.

Torsion colic accounts for only a small percentage of colic cases. Only surgery can fix an intestinal twist, so the horse will need to be transported to a clinic. Always contact your vet right away if your horse is experiencing colic symptoms because it is not always obvious which cases will resolve easily and which ones need emergency veterinary treatment.

» Laminitis
Laminitis refers to a painful inflammation of the feet that can often cause permanent lameness, and is sometimes fatal. Overindulging in grain or pasture high in sugar and starch is a frequent cause, especially for horses that are extra susceptible (ponies and horses with equine metabolic syndrome and/or insulin resistance).

If too much sugar and starch are consumed from grain or grass, they can’t be completely digested in the small intestine and will reach the hindgut. Their rapid fermentation there can lead to bacterial populations dying off, resulting in a release of toxic byproducts that can trigger laminitis.

To help prevent this cause of laminitis, grain/concentrates should always be fed at ½ percent of your horse’s body weight or less per meal. For a 1,000-pound horse, this will be 5 pounds. If your horse has a very high requirement for concentrate feed to keep weight on, divide it up over three or four meals instead of two. Pasture grazing should be tightly limited for horses prone to laminitis, or you can keep them in a dry lot where their meals can be controlled.

By understanding how your horse’s digestive system works, you’ll be better able to prevent the problems that can arise.

Managing Editor HOLLY CACCAMISE has an M.S. in Animal Science with a specialization in equine nutrition.