When it comes to your horse’s health, old wives’ tales and other long-standing beliefs may mislead horse owners with the best intentions. Here, we look at five common equine medical myths and determine whether they’re true or false.

TRUE: Horses are unique in their anatomy in many different ways, and one such anatomical trait makes it impossible for horses to vomit. When food is swallowed, it passes from the esophagus into the stomach by way of the lower esophageal sphincter, also called the cardiac sphincter. It’s designed to act as a one-way valve to protect the lower esophagus from acidic digestive juices in the stomach.

In most animals, including humans, this valve is weak and periodically allows for backflow, which results in vomiting during times of sickness. In horses, this valve is extremely strong and does not allow any backflow, thereby preventing a horse from vomiting. Additionally, the angle at which the esophagus enters a horse’s stomach is so acute that this also prevents backflow.

The most profound consequence of a horse’s inability to vomit is colic. In the case of impaction colic, fluid and gas begin to build up within the blocked gastrointestinal tract, causing pain and bloating in the small intestine and stomach. When a veterinarian passes a nasogastric tube through a horse’s nostril and down the esophagus during a colic exam, it can release fluid and gas that would otherwise not be able to come back up through the esophagus. In a severe case of impaction colic, if the gas and fluid aren’t released, they can cause the stomach to rupture and lead to death.

Related: The Truth about Colic >> 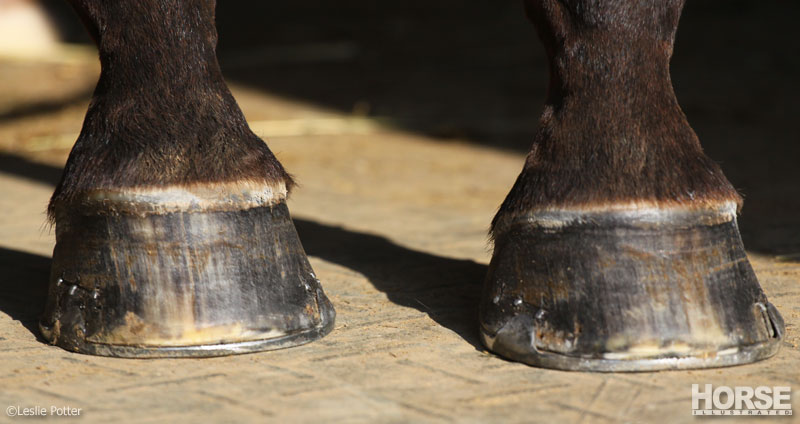 FALSE: Misconceptions about horses’ hooves have been around for a long time.

Many of these false impressions were due to the inability to visualize
the inner structures of the hoof. This was really only understood when
veterinarians began using microscopes and radiographs (X-rays) on a
regular basis to study the location of the coffin bone within the hoof
capsule and the microscopic laminae and blood vessels within the hoof.

There was even an old rhyme that perpetuated this misunderstanding:

What we know now is that the skin pigment of the hair at the coronary band determines the color of a horse’s hooves. This explains why a horse with a white sock will have a white hoof on that leg. Some horses with more complex color patterns, such as Appaloosas, may even have striped hooves; again, this coloration is determined by complex skin pigmentation.

Structurally, a dark hoof and a white hoof are exactly the same, making white hooves no weaker than dark hooves. Reasons for the perpetuation of the inferiority of white hooves may stem from genetics. If a line of horses with white hooves were genetically predisposed to weak hooves or poor hoof conformation, it may have been easier to base judgment on the color of the hoof rather than its overall structure.

#3: Horses can’t breathe through their mouths.

TRUE: Horses are referred to as “obligate nasal breathers,” which means they only breathe through their nose. This explains why during and immediately after a race or other strenuous physical activity, a horse will have large, flaring nostrils in order to take in as much oxygen as possible.

Again, this unusual aspect of a horse’s behavior is linked to his anatomy. The back of the roof of the mouth, called the soft palate, is present in most mammals, including horses. This structure separates the nasal cavity above from the oral cavity below. In horses, the soft palate is exceptionally long, extending all the way back to the throat where it touches the epiglottis, a piece of elastic cartilage in the larynx that flips up during swallowing to prevent food from going down the trachea (windpipe). In horses, because the long soft palate forms a complete barrier between the nasal and oral cavities, air can only come in through the nose and into the lungs. In humans and other animals, the soft palate is not as long, so air can reach the lungs from the nasal or oral cavity, thereby allowing us to breathe through our mouth or nose.

Although this respiratory design may seem disadvantageous to a prey animal such as the horse, which relies on quick escapes and vast oxygen consumption, a horse’s exceptionally large nostrils can move sizeable amounts of air down the trachea. When galloping, a horse’s neck will extend out, creating a relatively straight path from the nostrils to the trachea to the lungs, making oxygen delivery extremely efficient.

#4: A broken leg is a death sentence for a horse.

FALSE: The prognosis for broken legs in horses
has come a long way over the past few decades. Veterinary medical
advances—including those in radiology, anesthesia, surgical techniques
and pain management—have helped save numerous equine patients with limb fractures.

Not all leg fractures are created equal, though. The size of the horse
and location and severity of the fracture are the major aspects that
determine overall survivability. Horses are unable to spend long amounts
of time lying down due to their weight causing muscle, nerve and even
lung damage on the “down” side over time, so the challenge with a limb
fracture is keeping the leg motionless long enough for the bones to
heal.

Fractures in which the bone alignment has not been altered and that are located low on the leg, such as a pastern bone, can be stabilized with a heavy cast and have a fairly good prognosis. However, the farther up the leg the fracture is located, the more difficult it is to stabilize the injury for proper healing. In general, fractures below the knee or hock are reasonable candidates for surgical repair, while fractures above those joints have a poorer prognosis.

Other factors that determine a horse’s prognosis after a fracture include whether the fracture has broken through the skin or involves a joint, and how many breaks there are. The horse’s age and size also affect prognosis. Fractures in foals often carry the best prognosis, since their overall body size is still relatively small and growing bones have the fastest healing rate.

Unfortunately, sometimes complications with the leg that isn’t fractured can lead to euthanasia for a horse. When a horse with a leg fracture stands, he will bear most or all of his weight on the remaining three “good” legs. Particularly in the front legs, which bear 60 percent of the horse’s total body weight, the good leg undergoes extreme and chronic weight-bearing stress, putting the hoof at risk for support-limb laminitis. Laminitis is a common side effect of fracture recovery in horses and a common cause of post-fracture-repair euthanasia.

Related: What Happens When a Horse Fractures a Leg? >> 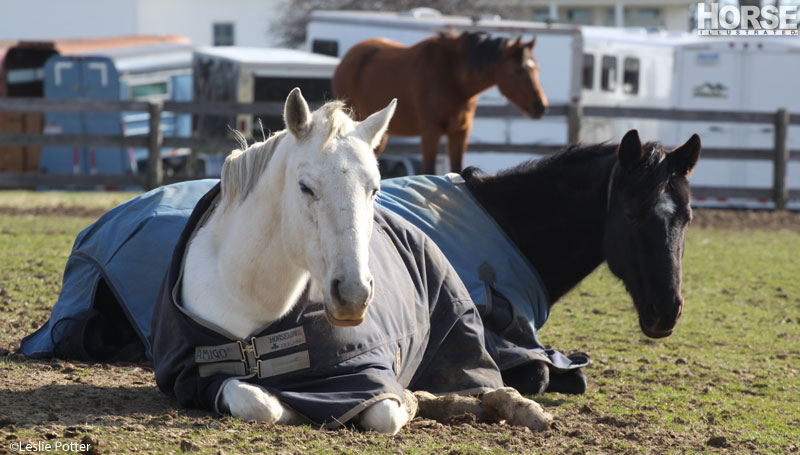 #5: Horses only sleep standing up.

FALSE: As prey animals, horses are able to rest in a standing position, allowing for a quick escape if a predator or other threat is detected. However, this rest does not provide the horse the opportunity for deep sleep, also known as REM (rapid eye movement) sleep. Horses need to lie flat on their side to attain REM sleep, although they do not appear to require long periods of REM sleep to benefit from its restorative properties. Horses can go days without it, and will do so if they don’t feel comfortable lying prone, such as in loud, unfamiliar places. When a horse does feel comfortable lying down, he usually won’t be down for more than an hour at a time. Horses repeat short REM cycles throughout the day or, more commonly, during the night.

A horse can rest standing up, and look extremely relaxed doing so, because the stay apparatus present in both the front and hind legs. This unique aspect of a horse’s musculoskeletal system allows him to lock his front and hind leg joints through the use of tendons and ligaments. This helps him to stay upright without requiring energy to engage his muscles. Most horses will have one hind limb relaxed with just the toe of the hoof on the ground, while the opposite hind limb is held straight in a locked position. He can catch a light snooze while still being able to run off at a moment’s notice.

Learning fact from fiction when it comes to your horse’s health can lead to a better understanding of his unique anatomy, physiology and behavior. This can also help broaden your horsemanship skills, benefitting both you and your horse.