The Coggins test is an integral part in maintaining the health and welfare of the United States’ horse population. However, even though many horse owners in the U.S. are familiar with the test, few know much about the disease it tests for: equine infectious anemia (EIA). Read on for more information about the Coggins test and EIA. 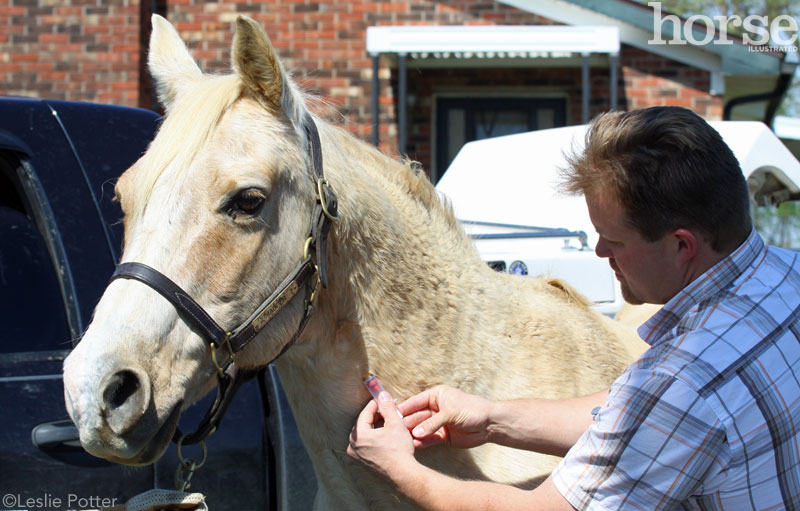 Equine infectious anemia is a viral disease affecting horses, mules, and donkeys. Transmission via blood occurs either by biting insects such as horse flies and deer flies or contaminated objects such as needles.

Also known as swamp fever due to its historical propensity to occur in Gulf Coast states, EIA is manifested in two stages: acute and chronic. When a horse is first exposed to the disease, the acute stage develops. The virus replicates rapidly in the horse’s bloodstream. This viremia results in fever, depression, anorexia, bruising, and fluid accumulation under the belly and down the legs. Signs may progress to death.

If the horse survives the acute stage, the chronic stage occurs. Here the horse may go through periods of normality while occasionally suffering from flare-ups of fever, anorexia, anemia, and enlarged lymph nodes. Anemia occurs due to the body’s own destruction of infected red blood cells. Historically these chronically infected horses were referred to as “swampers”.

Occasionally, after an initial infection, some horses can become silent carriers and show no signs of the disease. These horses still remain a reservoir of infection for other horses.

There is no cure for EIA and no vaccine. Testing is the only way to monitor and control the disease. A nationwide outbreak of EIA could result in devastating losses to the horse industry. Fortunately, testing is simple, relatively inexpensive, reliable, and quick. Named after Dr. Leroy Coggins, the veterinarian who developed the test in 1970, the Coggins test is a blood test that detects the presence of antibodies against EIA that may be present after exposure to the disease.

To conduct a Coggins test, your veterinarian will take a blood sample from your horse and submit it with paperwork that documents your horse’s identification, including registered name, age, gender, breed, color, and notable markings such as socks, blazes, whorls, brands, and scars. Coggins tests are analyzed in state-run laboratories.

The Coggins test is a specific type of laboratory test conducted via a technique called agar gel immunodiffusion (AGID). Another type of EIA test called the C-ELISA (competitive enzyme-linked immunosorbent assay) is offered in some states. The benefit of the C-ELISA is that results can be processed faster compared to the Coggins test, but with the C-ELISA, there is an increased chance of false-positive results. If a positive test result is found on a C-ELISA, a Coggins test is run to confirm the findings. For international travel, the Coggins test is the required test.
Although the prospect of having a positive Coggins horse is unnerving, the chances are slim. Since the emergence of the Coggins test over four decades ago, according to the USDA, the percentage of EIA positive horses in the US has dropped from 4% in 1972 to less than 0.002% in 2012.

What Happens after a Positive Coggins Test?

However, the question remains: if there is no cure, what happens if a horse tests positive? If a Coggins test returns positive, the first thing your veterinarian will do is contact your state veterinarian, place your horse in quarantine on your farm, and repeat the test to rule out the chance of a false positive.

If the second test confirms the initial result, there are three options. The first and most common option is euthanasia. Even if a positive horse shows no signs of the disease, it is still a reservoir for transmission to other horses. The second option is to place the horse in permanent quarantine. Quarantine for EIA has many strict regulations including being two hundred yards away from any other horse and housed in a barn covered with mesh to keep out biting insects. A third option is to transport the animal to a recognized research facility.

Who Needs a Coggins?

If your horse never travels, a yearly Coggins is not required. Many owners prefer to have a Coggins drawn annually just to have it on record in case of unplanned travel. Coggins results can take up to a week to process, depending on where you live, so if you’re caught in a rush, it’s handy to already have the test conducted.

There is no age limit as to how old a horse must be to be tested, although most foals aren’t tested until six months of age. This is because at this age, most maternal antibodies have worn off and won’t interfere with testing the foal’s own blood.

Like yearly vaccines, the Coggins test is routine for many horses in the U.S. This helps not only maintain the health of the horse and farm but also the biosecurity of the horse industry nationwide.

Liked this article? Here are others on horse health:
8 Things Horse Owners Should Do Before a Vet Visit
Preparing a Horse for Overseas Travel

October 2019 SmartPak SmartTip of the Month: Keeping Your Horse at...