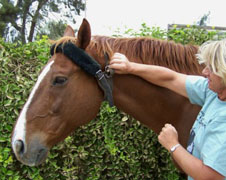 Cribbing is at the top of the list of stable vices, probably because it’s destructive and difficult to cure. A horse that cribs uses its upper incisors to grab hold of a solid object and then arches its neck until the muscles of its throat bulges. Often the horse will make a grunting sound as it gulps in a small amount of air. The habitual cribber leaves broken boards and weakened corral panels in his wake. The horse suffers, too. Most cribbers are poor keepers. Since they’re pre-occupied with cribbing, they don’t graze or eat as much as they should. Ingesting too much air predisposes them to gas colic. Plus, their upper incisors become unnaturally worn. So, what can you do if you’re saddled with a cribber?

The first thing to understand is that cribbing is not the same as wood chewing, where a horse nibbles like a beaver through anything constructed of wood. Instead, cribbing is a compulsive habit and is thought to release endorphins in the horse’s brain, producing a pleasurable sensation. The horse cribs and gains the immediate reward of feeling good, which entices the horse to seek the same pay-off over and over again. How and why horses begin to crib is a mystery. Studies have demonstrated that they don’t learn from a neighbor. It just begins spontaneously, often as the result of boredom, stress or sudden confinement.

If you have a confirmed cribber there are two types of deterrents. The most common option is a leather cribbing collar that prevents the neck muscles from expanding. It doesn’t halt the habit of cribbing, it merely reduces the effect. When adjusting a cribbing collar, find a happy medium between getting the collar tight enough to do its job and yet loose enough so that the horse can still eat, drink and breathe without discomfort. The standard rule is that a cribbing collar should be buckled tightly enough to remain in place without shifting when the horse lowers its head, but loose enough so that you can slip two fingers underneath the collar and the horse’s throat. A more permanent yet costly alternative is laser surgery. Performed under general anesthesia, the Modified Forssell’s Procedure clips the precise nerve and muscles utilized in cribbing. Though there is some recovery time and minimal scarring involved, the surgery has proven to be quite successful in permanently ending or greatly reducing the ability to crib.

Finally, when attempting to curb cribbing, don’t resort to inhumane treatments. Collars that zap a horse with electricity or prick him with sharp metal spikes haven’t proven to be any more successful than plain leather collars. Another anti-cribbing tactic is to insert metal hog rings between the horse’s upper incisors, with the idea that the rings will prevent the horse from grabbing hold of an object with his teeth. Hog rings are placed in a pig’s snout to prevent them from grubbing through the dirt and under fence lines; they are not meant to be crammed between a horse’s teeth. In fact, the American Association of Equine Practitioners (AAEP) has released a statement against the use of hog rings in horses, citing “visible damage to the gingiva (gum tissue)” and “the potential for persistent pain.” Dealing with a cribber can be frustrating, but it should always be approached with an educated mindset and a concern for the horse’s welfare.