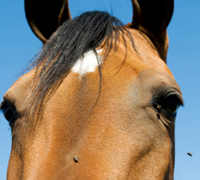 It’s only a matter of weeks before it hits: fly season. In warmer regions, the annoying invasion is already happening. To counteract the assault, horse owners take up arms with sprays, lotions, traps, baits…and wasps.

Yes, wasps, but not the stinging variety. The parasitic wasps used to control pesky insects are harmless to humans, animals and beneficial bugs, but they are relentless fly killers. Sheri Herrera de Frey, president of Arbico Organics in Tucson, Ariz., which markets the wasps under the tradename Fly Eliminators, says the wasps “are gnat-sized, nocturnal, USDA-approved burrowing insects that do not bite or sting.” She explains that these wasps, known as fly parasites in the bug business, have been used commercially since 1940.

Fly parasites are a mix of Muscidifurax zaraptor, Muscidifurax raptorellus and Spalangia cameroni wasp species that insert their eggs into the pupae (immature stage) of several species of flies—mostly common houseflies and biting stable flies. The fly parasite larvae then feed inside the pupa and eventually kill it. The beneficial parasites complete their development, emerge as adults and continue the process by searching out more fly pupae to dine on.

Several companies sell these parasites to anyone with a fly problem, including horse owners. Mic Grandfield, whose Redding, Calif., company, The Source Biological Fly Control, sells fly parasites, explains how his process works. “The parasites are packed [and shipped] in wood shavings in a  paper bag in a cardboard box. We recommend that the parasites be taken out of the box but kept in the paper bag at approximately 80 degrees until the hatch starts to occur. The parasites, when hatching, can be seen as small black specks above the packing material when the bag is held up to a light or window. Once the hatch is starting, the material needs to be sprinkled sparingly around all areas where there is manure, damp soil, damp bedding or other damp organic material. The parasites should not be distributed where they will be crushed underfoot, where they would be removed during stall maintenance, or where they would become food for wild or domestic birds.”

Tom Spalding of Spalding Laboratories in Arroyo Grande, Calif., which sells the wasps under the trademarked name Fly Predators, considers the process to be very simple. He explains that the key to successful fly control with parasites is to go where the manure is. “The Fly Predators feed on manure-breeding pest flies, so you release them in your manure piles, places in pastures where your horses tend to go, near watering systems and feed areas and inside the barn.”

Tom also states that timing is crucial for the optimum results. If you release for the first time during fly peak season—July through August—”you won’t see results for up to 30 days,” he says. “The parasites don’t kill adult flies, they only feed on the pupae. A fly’s average life span is nearly 21 days, so you have to wait for the adults to die off before you start to see results.”

A better system is to release before fly season begins, and continue releasing on a monthly basis until the season ends. To help people determine when to release, how much to release and what the cost is, the Spalding Laboratories website includes a handy calculator that computes the quantity of parasites you need based on your region, acreage, and the number of horses and other animals you own. The site also calculates the cost for the entire fly season.

Whether you keep your horses pastured or in stalls, fly parasites can be effective. However, there are some considerations. “The more confined the habitat, the easier it is to maintain large numbers of wasps,” Mic Grandfield says. “As the acreage increases, treating the areas the horses frequent can still be reasonably effective. Open range and rotational grazing are more difficult to control due to the need to maintain populations of parasites in many areas.”

If you keep your horse at a boarding facility and are interested in using fly parasites around your stall, forget about it unless the whole ranch is on the program. “You have to treat the entire facility in order to control the fly problem,” Tom Spalding says. Otherwise, the flies will outnumber the wasps and you won’t see a difference.

Tom explains that the best way to maintain successful fly control, regardless of your acreage size, is to release sufficient numbers of parasites. “Flies can travel up to a quarter mile; the parasites only travel up to 300 feet. So if your neighbors have horses, the parasites probably won’t make it across property lines.”

Sheri Herrera de Frey explains, “Flies are master breeders with a single female laying 1,000 eggs that will hatch into 1,000 adults within one week.” She says the wasp female is not nearly as productive. “[It] will only lay approximately 300 eggs that will take three weeks to hatch.” According to Sheri, the parasites can never eradicate their natural enemy, only significantly reduce fly populations. But when parasitic wasps are used along with fly traps and repellents to combat the larval stage of the fly, excellent fly control can be achieved.

Overhead misting systems and premise sprays kill the wasps, but products that you use on the horse—fly sprays, roll-ons, lotions, et cetera—can still provide benefits without harming the “good” bugs. However, Mic Grandfield explains that you have to move your horse to an area well away from where the parasites are during application of any spray-on products due to overspray. Fly traps, baits and sticky paper are all safe to use with fly parasites, but it’s best to use them well away from release areas. “We strongly recommend the use of fly traps outside the perimeter of the pasture, corral or stable area,” Mic says.