You’ve spent time and money clearing, grading and bringing in materials. Your dream has come true: You’ve built a riding arena in your own backyard. Now comes the maintenance …

Your beautiful arena won’t stay that way without ongoing upkeep, which includes an investment in some tools. Maintenance needs vary depending on factors, such as footing material, weather, daily use, type of riding and budget. Some basics do apply, however, regardless of your situation. 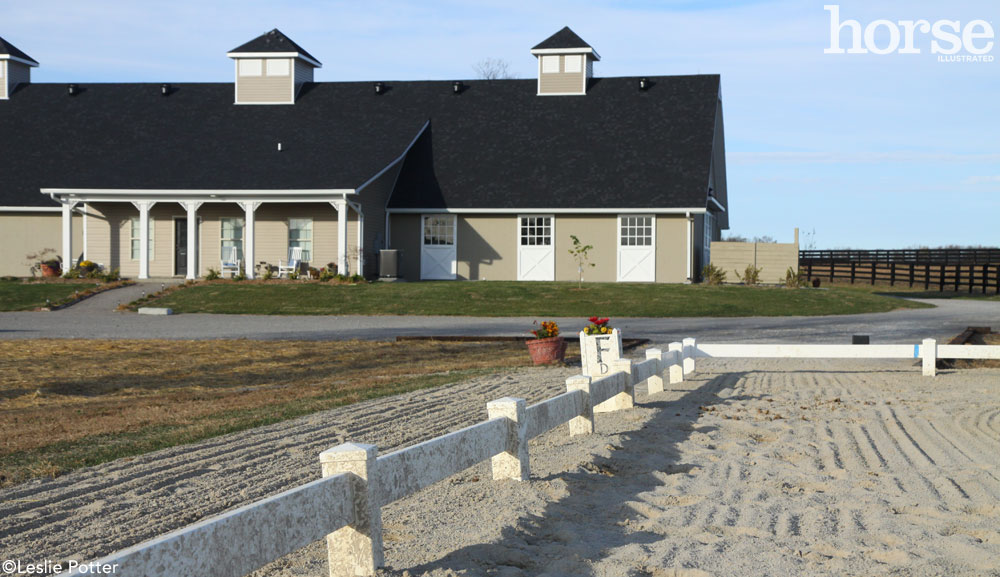 A well-maintained riding arena allows your horse to perform at his peak. The best riding surfaces offer your horse just enough cushion, good traction (not too slick or uneven) and minimal dust. A good arena is located away from any run-off and is typically built with three layers of materials. The bottom layer is the “sub-base” (native soil), which has been graded and leveled (or slightly crowned for drainage), then compacted with heavy equipment. The middle layer in an arena is the 4- to 6-inch “base” made of a material that is designed to compact (crushed rock material with granules no larger than 1?4 inch is ideal). This base is rolled with heavy equipment to further compact it and follows the slope of the sub-base. If a crown is incorporated, it should be built down the center of the arena, lengthwise, sloped 1 to 2 percent on both sides. (An indoor arena shouldn’t have drainage problems, so it can be designed flat.)

The top layer of the riding arena is the footing or riding surface, which is usually sand, wood products, rubber, stonedust, or a mixture of these materials with perhaps a little topsoil, stall waste or sawdust added in. No matter what you use, the trick to maintaining your arena—and the footing that sits on top—is taking care of the base.

“A good base that is well-built should last you 10 years,” says George Chatigny, general manager of the Los Angeles Equestrian Center (LAEC). Located north of downtown Los Angeles, LAEC is the venue for many world-class equestrian events. It’s also home to many outdoor riding arenas, one fully covered stadium arena and more than 500 stalls for horses boarded at the facility.

George says that along with environment, the wrong equipment and poor maintenance will wreck your base. “An arena is only going to last a short while until you find the means to water it and drag it on a regular basis,” George explains. “As the horse goes around, the footing is packing, and if you don’t get into the arena on a regular basis, then that arena will pack down.”

Dragging an arena can be as simple as using a hand-held arena rake. But more often, some heavy equipment is needed. Arena “drags” come in many designs—simple to sophisticated—and the purpose of these tools is to move footing back to where it needs to be. Some drags can be pulled with either a pickup truck or utility vehicle; others require a tractor with a 3-point hitch.

Watering an arena can be done with nothing more than a garden hose and a sprinkler attachment, but many companies now offer arena watering systems that do the job much more efficiently. Also, some drags actually feature watering systems that let you water while dragging. The benefit of this feature is that it allows the user to tackle troublesome spots in an arena, such as unshaded areas. How much water to use depends on your environment (arid versus humid), whether your arena is indoor or outdoor, and how well you’re maintaining moisture levels on a regular basis.

In the case of LAEC, watering and dragging is done more than once a day because of the high traffic and arid conditions. A small facility, particularly a home arena used only a few times a week by a few horses, won’t need as much attention but upkeep is still required. “Drag and water your arena every day,” George recommends, even if you’re not riding in it daily. “If you have something [a drag] that penetrates the surface and doesn’t bust up the base, it will constantly keep the material from compacting, and your horses are going to find more enjoyment traveling on something that has a little bit more air, a little bit more fluffiness to it. So even a spike-tooth screen drag [that doesn’t rip the base] on the back of a bumper of a pickup truck is going to help.”

Daniel Webb, business manager at the Center for Equine and Pre-Veterinary Studies at the University of Findlay in Ohio, follows a similar protocol in order to maintain good footing in the college’s riding arenas. “We water and drag every day—twice a day when school is in session.” In addition to two indoor arenas for its students, the University of Findlay also maintains outdoor arenas.

But Daniel warns that you have to be careful not to touch the base when dragging. “You can’t go any deeper than the footing itself,” he says. Ripping into the base causes ruts and unevenness. Unfortunately, once this happens you have to strip away the footing, fix the base by leveling and flattening, and then bring the footing back in.

Another way to protect your base is to pay special attention to highly trafficked areas, such as an entry gate area that can become rutted over time. Also, mix up your riding routine so that you aren’t constantly traveling on the same line. For example, if you jump, change your course often. Also, mix up your on-the-rail, off-the-rail work, so you don’t develop a well-worn track in your arena. Another problem is when footing “collects” over time. Even though your base is intact, footing can pile up in places. To fix this problem, George recommends releveling your footing every two months using a leveling tool featured on many arena drags today.

Keeping your footing in your arena can be tricky if you don’t have solid walls around it. The University of Findlay uses block walls to keep footing in, but not everyone can afford the luxury. “The material that you paid for and want to ride on is not in the right track. Therefore you need to bring it back and redistribute it in the arena,” says LAEC’s George Chatigny. He recommends tackling this chore when you relevel.

During the rainy season, the maintenance crew at LAEC is on high weather alert. Before a rainstorm hits, the crew levels and smoothes the footing to help shed water, and the arenas are off limits for riding or turnout until the base and footing dry. Riding in a saturated arena is dangerous for your horse, and it tears up your base. Using an alternate safe “sacrifice” riding surface will save your arena investment. While Los Angeles’ “extreme” weather typically amounts to only the occasional downpour, other parts of the country aren’t so fortunate. At the University of Findlay, weather includes snow and ice. “We don’t use our outdoor arenas during the winter months—we stay in the indoor arenas instead.”

Carol Craig, who along with her husband Mel, owns CJ Ranch in Crown Point, Ind., says she uses her outdoor arenas most of the year. Carol, a trainer and horse show judge, holds several shows at her facility for both English and western riders. “People are surprised, but we ride outdoors nearly all winter. We do have a covered arena, but our outdoor ring holds up very well.” Carol says that even when there is snow on the ground, the footing can be rideable, as long as there’s no ice. “Our soil is a heavy clay, but we have found just the right mix of native soil and sand for our footing.” To maintain that mix, arenas at CJ Ranch are dragged daily.

If you’ve spent the time and money to design a riding arena, take the time to maintain it and it will last longer and cost less over the long run. Also, a good riding surface will help your horse stay sounder, saving you countless dollars on veterinary bills.

The Fine art of Footing at the Washington International Horse Show