Many horse owners dream of owning a home riding facility. Lucky you—your dream has come true. You have the barn, your horses are happily settled, and now you’re eyeing that bare patch of ground and envisioning your dream riding arena. Many home riders make do with a sectioned off piece of ground near the barn that they affectionately call their arena. But this homespun effort is really an arena in name only. Without a good base and proper footing, it’s difficult to make the going consistent enough for your horse’s health and safety. If you want a safe, workable arena that will hold you in good stead for years, it’s going to take planning, effort and, it must be said, an investment of resources. 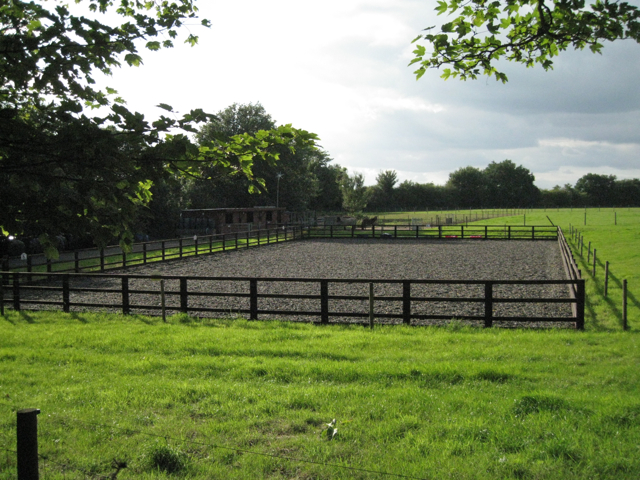 ©Copyright Robin Stott and licensed for reuse under this Creative Commons License
The job of the base is to make a level surface to support the footing above. If the base is properly installed, there will never be low spots, deep spots or areas that collect water in your arena. The ideal footing helps cushion your horse’s every stride by allowing his hooves to slide just a little bit as he sets them down and provides a firm surface for his hooves to dig into as he pushes off. Leaving your ground as is will never provide these benefits, so as a result your horse’s performance will suffer because he won’t be able to trust the footing, and he will remember, perhaps spook, at uneven spots. Without proper drainage, you may also find your homemade arena under water and unusable most of the time.

Robert Malmgren, author of The Equine Arena Handbook: Developing a User-Friendly Facility, is considered the foremost authority on arenas. He says creating an arena on your own is very hard if not impossible because you need several players to help you avoid pitfalls.

“Making an arena seems like a lot of complications, but you’ll avoid mistakes if you plan right and employ the right people,” explains Malmgren, who is from Colorado Springs, Colo. “Mistakes are very costly to correct after the arena is installed.”

Before you put a shovel in the ground, sit down and get organized. Think about where you want to put the arena. Right next to the barn may seem convenient, but if that area collects water, think again. Drainage is a concern in every arena, so you’ll want to avoid land that’s a perpetual pond, if possible.

“As we get into global warming and climate change, we are going to have some extremes in moisture,” Malmgren adds. “This year in Colorado we’ve had some very extreme rains with a long duration of storms. That kind of rain would inundate an arena with drainage problems.”

Next, you need to determine the soil type in the site. Malmgren says to seek free assistance through people at your local office of the Natural Resources Conservation Services (www.nrcs.usda.gov). “They are the government’s soil people for the entire country,” he says. “Every county should have an office. Go in and tell them what you’re building and ask about what kind of soil you have. They usually have the information at hand, and can tell you whether it’s possible to create an arena in that area. They also provide good information, such as the percentage of sand, silt, clay and gravel in your soil. They will often come out to your site.”

Make sure to have a plat map of your property with you so the NRCS officials can pinpoint the location. They might not be familiar with the arena characteristics you require, so tell them what you need to know: type of soil, three feet in depth. Also, ask if the soil is high in clay, which is important regarding water absorption and base stability.

The next step is to obtain a permit. Getting a permit for an arena might sound like overkill, but most counties require at least a grading permit if a certain amount of land is disturbed. You may also need an erosion and sediment control permit. You may not think you are disturbing that much land, but you will disturb twice as much earth as the size of your arena.

You’ll need to get yet another expert on your side—a soil consultant. Soil consultants are engineers who understand all the ins and outs of working with soil. They are the ones called in to advise facilities such as baseball fields, golf courses and parking lots. Look for a soil consultant under listings for engineering consultants.

The NRCS office may also recommend someone in your area. “A soil consultant is important because you’ll be moving soil and he’ll know how to help you do that correctly,” Malmgren says. “He can look at the NRCS’s information and tell you what you need to do to make the arena work for your situation.”

Starting at the Bottom:

The base is important for a successful arena. Bottom line: You will never have a good arena without an adequate base. Your soil consultant will help determine your base requirements and if the soil will form a stable base. The base should be about six inches below the surface, if it’s a stable base. “If it isn’t stable, you might have to bring in some crushed stone to create a firm base,” Malmgren says. “You want the base to be firm because it will create a level surface for the footing above. The stone will have to be rolled when installed to create maximum hardness and evenness, and so it stays in place.”

Your topsoil might make a good base and you can put your footing right on top of it, but that’s the exception rather than the rule. Soil situations are different for everyone. It can even be vastly different within the same locale. One neighbor might have clay soil while another has sand.

Some areas of the country are subject to “frost heave” where the ground expands in the winter, causing rocks to come up to the surface. In the spring you’ll find rocks on the surface, and you’ll have to pick them up every year. The soil consultant will tell you if frost heave might occur in your area. If you have frost heave, extra heavy rolling at the time of construction will help keep your base in place. The NRCS may also give you this information at no charge.

Anyone who has had training interrupted because of a flooded arena knows how frustrating it is. Sinking money into an arena that sits underwater part of the year is a waste. Your soil consultant can help you avoid drainage issues.

He or she will first determine what your soil is like from the surface down to three feet deep. So perhaps you’ll have three feet of pure clay or maybe six inches of loam and then six inches of sand, followed by gravel.

“This is important to understand because you need to know how your soil handles water,” Malmgren says. “For instance, a gravel layer is going to hold some water where clay will not. If you have heavy rains, you’ll know how much water you’re going to be able to store before you have problems. And then during construction, you’ll know how to work with that.”

If your soil doesn’t drain well, don’t give up on your dream arena. There are ways you can limit flooding. You can install a French drain, which carries water away from the arena. There are several ways to create this type of drain for each area of the country. The NRCS and your consultant can help with water drainage issues.

You can also crown the arena, so that water drains off it. Or you can raise the whole arena above ground level. 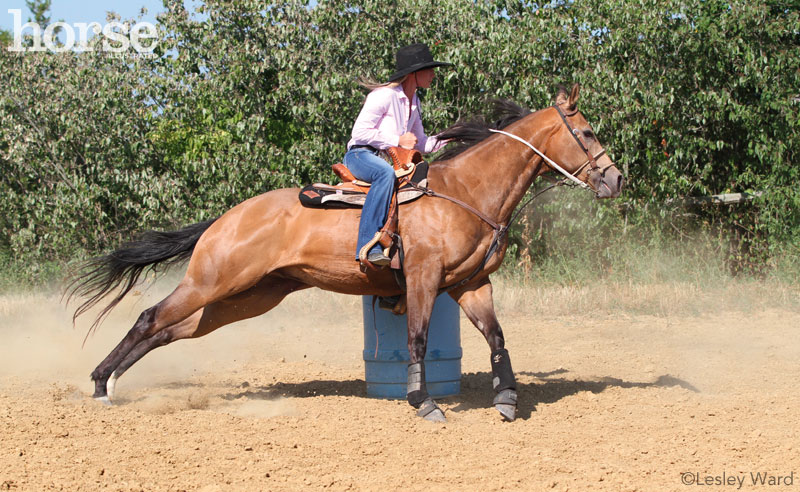 Many types of footing additives are on the market, from shredded felt to crumb rubber to poly microfibers, but most footing “recipes” begin with sand. And any old sand won’t do. You want sand that will bind and hold together.

Sand comes in a variety of shapes; some is sharp and angular, and some is rounded. Sand performs in different ways depending upon its characteristics. It can be slippery if it’s round, like tiny ball bearings. The round grain will act like beach sand and be unsteady underfoot. It will be difficult to move through it, particularly if it’s dry.

Sharp sand binds together to hold better, which is the preferred footing for arenas. “Look at your sand grains with a hand magnifying glass if you want to get down to details, so you know what you’re getting,” Malmgren says.

Finding quality sand can be a challenge. If you have neighbors who have an arena, ask them if they are happy with their sand and where they got it. If your neighbor has a good arena and soil similar to yours, then you know that type of sand will work for you. Also, ask how many inches your neighbor used. Footing depth ranges from two to six inches, depending upon your land situation and discipline. (For example, dressage riders generally prefer a shallower footing while reiners like deeper footing.) However, always use less footing than you think you will need. It’s easier to add more than to remove.

Sand by itself works well, but you need to be careful when watering. Too much water can flood the arena, making it unworkable for a long time. Wet sand is harder than dry sand, but very dry sand can be inefficient and create a dust problem.

Footing additives can help to improve cushion and improve traction. They also clump sand together better and prevent compaction. Some may help prevent freezing and cut down on trenching along the walls of the arena. Additives also create footing that requires less harrowing and watering. When choosing any additive, make sure that it’s manufactured for riding arenas.

Sometimes people use arenas as dumping grounds for manure and shavings. Although it can hold water well, manure creates a health issue for both humans and horses. The shavings also break down quickly and create a slippery surface.

Most arenas with heavy use will have a rut with half of the footing falling out of the arena. Pulling the footing back in the arena is a killer, Malmgren says. “Boards installed around the arena will solve the problem,” he advises.

“Untreated, unpainted lumber is best. I don’t like using any chemicals in an arena. If horses are turned out, they can gnaw on the boards. The height of the board depends upon the nature of your footing. If it’s a lot of footing, you’ll need bigger boards. It’s best to use higher boards because you may need to add more footing later on.”

Grass (turf) arenas are suitable under the right circumstances, depending on your annual rainfall and the type of grass. “Bunch grass doesn’t make good footing because soil is in between the plants, creating an uneven surface,” Malmgren says.

Read on for tips on arena maintenance >>