Smokin On A Star a.k.a. “Smoky” came into the lives of the Frank Green Family when she was 18 months old.  She seems to be a typical American Quarter Horse; however, the story of her life and duties are nothing short of phenomenal!

From the beginning, Frank and Smoky developed a special bond which has only gotten stronger as the years have progressed.  Prior to her arrival, Frank proudly served the United States in the armed forces and the Vietnam War.  He came home to face some very serious health problems.  You see, Frank “blacks out” or has seizures on a regular basis. The seizures are a medical mystery, and there is no medicine to control them.  This has robbed him of the ability to drive a car as well as other normal activities that many of us take for granted.  As Frank’s health problems progressed, he quickly turned to Smoky for companionship and friendship. 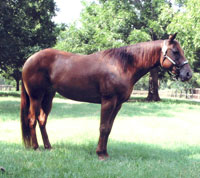 Smoky considers it her duty to protect Frank, and she takes her job very seriously.  Recently, the local farrier came to trim her feet.  When he arrived, he found Frank collapsed on the ground having a seizure and Smoky at his side.  The farrier walked into the pen to see about Frank only to be met by Smoky charging at him and running him out of the pen.

On another occasion, Frank was leading her in the yard and collapsed at her feet.  She stood at his side as the family dog came to investigate.  As Frank gained his consciousness, he witnessed Smoky biting the dog to make sure Frank remained safe.  The wildest thing that has happened was the day she spooked from some wild hogs, Frank awoke on the ground with Smoky running circles around him making sure once again that her beloved owner remained safe.

Frank and Smoky love to go on trail rides.  He often invites friends to accompany him.  These friends will testify to the fact they have seen her wobble over the paths to keep him on her back when she feels him having a seizure.  When he collapses in the saddle, she stands still until he regains his consciousness and asks her to walk off.  When he does fall, she stands patiently at his side until he can remount to continue their ride.

As time passes, the bond between Smoky and Frank only becomes stronger.  You can sense and feel the love she has for him through the look in her eyes.  The love the owners have for her can be seen by the tears in their eyes.

It is a pleasure and an honor to nominate this deserving horse for the prestigious MD Barns Silver Spur Award.