The Bureau of Land Management’s roundup of wild horses and burros in Nevada began as scheduled Jan. 3 in the Spring Mountains near Las Vegas. According to the BLM, the area has become overpopulated and the roundup is a necessary part of management.

“We have established what is called an Appropriate Management Level, which is the number of animals–horses and burros–that the ecosystem can sustain,” says BLM spokeswoman, Kirsten Cannon. “This is based on climate, precipitation, utilization of forage in the area and other factors as well.”

However, some contest that the roundup is occurring based on a flawed Environmental Assessment Report and fear it will irreparably and permanently harm the equines’ genetic pool.

A request for a temporary restraining order, filed by America’s Wild Horse Advocates and Wild Horses 4 Ever, was denied by a federal court judge. While an appeal has been submitted, roundups are planned to continue through Jan. 18.

Since the beginning of the roundup several allegations of animal mistreatment have also been made, including one involving video footage of what appears to be a burro being kicked in the head by a wrangler.

“The animals are treated humanely,” Cannon says. “The burro was not going into the horse trailer, so to protect the burro from getting its head stuck, the wrangler was waving a noise maker in front of the burros face. The wrangler needed to take action to move it away from the corral.”

In the end, 370 horses and 900 burros will be gathered, with a re-release planned for 104 horses and 120 burros, based on sex and age to control breeding. The rest will be moved to a short-term holding facility for health inspection, vaccination and freeze-marking. From there, equines that are 10 years of age or under will be made available for adoption. Those that are older than 10 years or make three unsuccessful attempts at adoption are moved to sale, meaning ownership rights belong to the purchaser. In these cases, the BLM says it takes measures to prevent them from ending up in slaughterhouses.

“[Purchasers] sign a statement saying they will not send the horse to slaughter,” Cannon says. “The Purchasers are generally involved with wild horse interest groups, and nationwide we work with the slaughterhouses so they will not accept horses with the BLM freeze mark on their neck.” 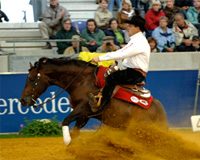