The United States will host its first FEI Paralymic Qualifier May 13 – 17 at Morven Park in Leesburg, Va. In addition to being a qualifier for the 2008 Paralympic Games in China, it will also be a selection trial for the 2007 United States Para Dressage World Championship Team and the United States Equestrian Federation National Championships for Para-Equestrians. It will be the third international FEI Paralympic Qualifier in Para-Equestrian; the other two took place last year in Vancouver, British Columbia and in Belgium.

“We are thrilled that Morven Park has agreed to host this first-ever event in our country,” says Denise Avolio, chair of the USEF Para-Equestrian high performance committee. “It will be a great international start for our riders leading up to the World Championships in Hartpury, Great Britain and the 2008 Paralympic Games.”

Invitations will be sent to other national federations worldwide, and it is expected that riders from North and South America will be joined by others from around the world.  The top riders for the United States who may be competing include 2004 Paralympic silver medalist from the Athens Games, Lynn Seidemann, of Coppell, Texas; Keith Newerla of Abescon, N.J; Barb Grassmyer of Placerville, Calif.; and Kathy Groves of Columbus, N.C.  The United States Chef d’Equipe will be Missy Ransenhousen. 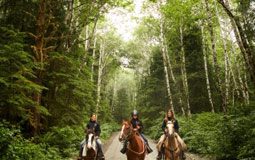 Competitive trail riders will help horses in need in 2013