According to the National Horse Protection Coalition, a bill introduced Thursday in the Illinois State Legislature could signal the end of horse slaughter in the United States.

Illinois is the only state where the slaughter of horses for human consumption continues. A recent federal court decision has made it hard for two Texas plants to operate, and may lead to their permanent closure. The three facilities are the only horse slaughter plants operating in the country.

The Illinois bill is sponsored by state Rep. Bob Molaro (D-Chicago). It would prohibit the transportation of horses into the state for the sole purpose of slaughter for human consumption.

“Illinois has long been a leader in animal protection and anti-cruelty laws, and as such, it is high time we put an end to equine cruelty and join Texas and all other states in protecting horses from needless slaughter.” Molaro says.

Illinois Gov. Rod Blagojevich (D) and the Illinois Department of Agriculture supported a similar bill when it was last introduced, and it is anticipated that they will support it again. A similar bill easily passed the Illinois Senate in May of 2004, but was narrowly defeated in the House due to an unrelated issue. Illinois Rep. Jan Schakowsky (D) is leading the federal effort to end slaughter with a bill cosponsored by Rep. John Spratt (D-S.C.) and Ed Whitfield (R-K.Y.). The legislation is pending in the U.S. Senate. 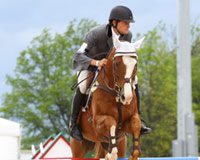 Voting now open for USEF Horse of the Year and Equestrian...