Four horses that are being held in isolation at Virginia Tech’s Marion duPont Scott Equine Medical Center are in stable condition after exhibiting symptoms of Equine Herpes Virus Type 1 (EHV-1). According to hospital officials, two of the horses have tested positive for the virus while results of tests performed on the remaining two are expected early next week.

Post-mortem tests taken on a fifth horse, euthanized Feb. 13 for an unrelated disease, also came back positive for the virus, leading to a total of three positive EHV-1 cases at the center.

According to Dr. Nathaniel White, a professor at Jean Ellen Shehan and director of the Marion duPont Scott Equine Medical Center, it is believed that the EHV-1 infection began Feb. 7 when a horse, admitted for an unrelated emergency, subsequently underwent surgery and was stalled in a barn with other horses.

“At the time, the horse did not have a fever and was not exhibiting any symptoms of neurologic distress,” White says. “However on Feb. 11, four days after admission, that horse developed a fever and neurological signs and was immediately placed in our isolation unit.”

The hospital’s veterinarians performed a variety of tests to identify the cause of the horse’s symptoms and on Feb. 16, one of those tests came back positive for EHV-1.

“Because this is a very contagious virus that can cause fatal neurologic disease, we elected to close portions of the hospital immediately and to contact owners of horses with any potential exposure to the virus during the incubation period,” says Dr. Martin Furr, Adelaide C. Riggs Chair in Equine Medicine at the Marion duPont Scott Equine Medical Center.

The State Veterinarians of Maryland and Virginia were notified about the suspected case on Feb. 19. A state-imposed quarantine of the facility was implemented on Feb. 20, when two additional horses being treated at the center for unrelated problems developed fever and neurological symptoms. The hospital will not be admitting any additional patients until the quarantine has been lifted, a process which could take an estimated two to four weeks.

According to White, the decision to close the hospital was a difficult but necessary step in order to protect the center’s patients and the horses in the regional population.

“Although the majority of our patients had no contact with the affected horse and encountered minimal risk while at the hospital, we felt that this quarantine was essential in preventing the spread of the EHV-1 virus,” White says. “We are working closely with the State Veterinarians of Virginia and Maryland to resolve this matter as quickly and safely as possible and we will only reopen for business when we are certain that there is no chance of further infection.”

Daily updates concerning the hospital’s status are being posted on the center’s website, www.equinemedicalcenter.net. 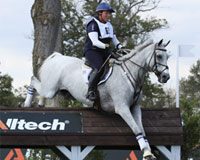