Janet Vankanegan boards her bay and white tobiano paint mare, Lily, in a small stable tucked into the cityscape of Norwalk, an urban community just outside Los Angeles, Calif. On Feb. 26, Vankanegan took Lily for a trail ride not far from the stable. Unfortunately, Lily spooked, unseated her rider and bolted off down the street. Distraught, Vankanegan began looking for her horse. When the mare didn’t turn up, she contacted law enforcement officials.

Surveillance video from a parking lot surrounding a diner and coffeehouse showed Lily gallivanting loose across the asphalt. Then, several men surrounded the mare and one climbed into the saddle and rode out of view. Of course, Vankanegan was distraught. She considered the horse stolen and feared that the paint mare would be sold at an auction. However, the wannabe urban cowboy who took Lily must’ve had a change of heart, especially after local network news shows were saturated with the unusual tale. Vandanegan received a phone call the next weekend from an unidentified man in the nearby town of Ontario. He said he had the mare in his possession and would like to return her. Reportedly, Lily is back at her home stable, safe and sound, and probably not too eager to go on another adventure. 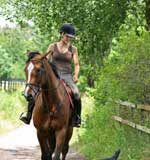