Home Horse News Have you seen this horse?
First profiled by Stolen Horse International (netposse.com), the search for 11-year-old Mary Elizabeth Nunes has now expanded to America’s Most Wanted.

Nunes was last seen Oct. 22, 2004, when she left Whitefield, N.H., with her non-custodial mother, Genevieve Kelley, and her stepfather, Scott Kelley. Warrants have been issued for the Kelleys’ arrest, though Genevieve’s ability to speak fluent Spanish leads authorities to believe they may have fled to a Spanish-speaking country. With few other leads, the only promising clue to finding Nunes may be the family’s horse.

Friends and family say horses are a part of the Kelley family’s life. Genevieve has ridden western style since high school and Mary has been riding since she was 5 years old. Active members of the equestrian community, the family owns an Appendix Quarter Horse named Nicky II, and a pony named Skippy. While little is known about Skippy, police believe finding Nicky II may be the key to finding Nunes.

Nicky II is described as a dark bay gelding (though it’s possible he could be a stallion) with a white star and stripe.

Nunes was born with a medical malformation, causing migraines, leg weakness and other symptoms that might require medical treatment. It is possible that Nunes does not realize she has been abducted. 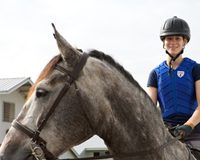