Big Brown’s Owners Say Stable Will Go Steroid Free
The owners of the Kentucky Derby and Preakness Stakes winner Big Brown, saying they want to lead the way to the elimination of performance-enhancing drugs in horse racing, announced Sunday that they would immediately begin withdrawing all steroids and any unnecessary medications from their horses, from The New York Times. Read more >>

Horses eating themselves out of a home
On a spectacularly green salt marsh, with the skyline of Ocean City, Md., as a backdrop, a wild horse, head down, nibbles away at the grass, from Delaware Online. Read more >>

Saddle Up! Getting a Jump on Proper Horse Care
California Veterinary Medical Association provides tips on caring for your first horse, from PRNewswire. Read more >>

NJ man admits killing horse with bow and arrow
A southern New Jersey man has admitted killing a horse named Cutie with a bow and arrow, from the Daily Record. Read more >> 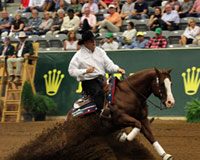