Kentucky may ban steroids in racing
The newly created Kentucky Horse Racing Commission is preparing to vote this summer on a steroid ban for the sport, from Sports Illustrated. Read more >>

Activists in Rome urge ban on horse-drawn carriages
Tourists love to view the Colosseum and other famous landmarks in Rome from the back of a horse-drawn carriage but animal rights activists said Tuesday it’s time to ban the practice, from The Kansas City Star. Read more >>

Big effort results in trapped horse’s rescue
A horse that slid down a highway embankment and became tangled in a large tree root was saved in a dramatic rescue Monday morning that involved about a dozen people and a backhoe, from KnoxNews. Read more >> 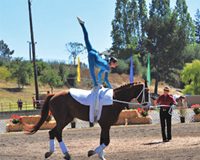