Food, fuel costs present tough choices for local horse owners
This week, Tiffany Ostrander made one of the most difficult phone calls of her life — to a horse rescue organization, asking if it might have room for her beloved 8-year-old quarter horse, from The Bulletin. Read more >>

Horse in Va. Beach killed by lightning strike
Lighting’s being blamed for the death of a horse in the Pungo section of Virginia Beach, from WVEC. Read more >>

Trapped Long Beach, Calif., horse is rescued
A horse was under veterinary care Thursday night after firefighters cut it free from a metal fence where its head had become pinned, authorities said, from the Press-Telegram. Read more >>

Returning to the thrill of the race in Mongolia
The boy rode the stallion in a trot around the camp, cooling it down after a lengthy ride across the steppe, from the International Herald Tribune. Read more >> 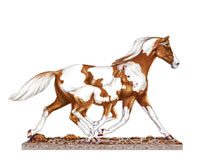 Winners announced in the APHA/Trail of Painted Ponies Art Competition